ATLANTA, Georgia, Mar 30 2012 (IPS) - In the three years since its inception, the Tea Party has cemented its place in U.S. politics, routinely making waves in political races of national interest. At the same time, some local Tea Party groups are beginning to build post-partisan coalitions that are both surprising and counterintuitive. 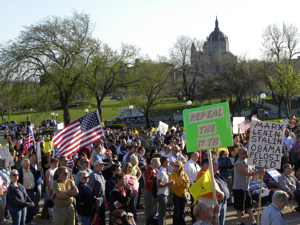 Tea Party protestors at the Minnesota Capitol in 2010. They called for smaller government and the repeal of Obama's healthcare law. Credit: Fibonacci Blue/ CC by 2.0

The Tea Party is not a formal political organisation; it is an amalgam of loosely affiliated organisations. Difficult to characterise as a whole, the movement at times fails to present a unified front, with some of its groups claiming to possess the support of some people who call themselves Tea Party members even while dissociating themselves from others.

Rich Swier, a TPN activist, called anti-gay bullying “healthy peer pressure”. TPN president Judson Phillips referred to the gay movement as part of a “liberal freak show”. The Tea Party is also home to many anti- immigrant activists, according to the Institute for Research and Education on Human Rights and the Southern Poverty Law Centre.

But at the local level, some Tea Party affiliates are pursuing post-partisan issue coalitions around topics such as ethics reform and First Amendment rights.

The Georgia and Atlanta affiliates of the Tea Party have led the way in this regard, Jenny Beth Martin, co-founder and CEO of Tea Party Patriots, told IPS.

Within the last three months, the Georgia and Atlanta affiliates worked with groups like Common Cause Georgia and the League of Women Voters, both non-partisan groups, to promote ethics reform in the Georgia Legislature.

In addition, when the Georgia Legislature began considering SB 469 – a bill that would make protesting on or near private property an aggravated misdemeanour with a fine of 1,000 dollars per day and one year’s imprisonment – the Tea Party joined with labour unions, leaders in the Civil Rights Movement, and Occupy Atlanta to oppose the bill.

On Thursday, the bill was defeated in the Georgia legislature, largely due to the Tea Party’s involvement and its influence on Republicans, who hold the majority in the legislature.

“Although it’s obvious to most people there are many issues we can’t collaborate on because we have different opinions on them, there are some issues that have absolutely nothing to do with political right versus left, that are non-partisan issues,” Julianne Thompson, state coordinator for the Georgia Tea Party Patriots, told IPS. “Citizens are starting to realize there are many issues more important than politics and we need to unite on those issues to ensure continued freedom in America,” Thompson said.

“You have to give credit where credit is due,” Larry Pellegrini of the Georgia Rural Urban Summit said. “It is to the credit of both sides that they are willing to work together.”

“There may be elements that drive the agenda,” Pellegrini acknowledged. “Their anti-immigrant stuff is pretty nasty. Yes, there’s maybe a problem when you look at funders and people that may be perceived as being overly influenced by that.”

It is still up for debate whether the Tea Party began as a genuine grassroots response to President Obama’s healthcare reform programme of 2009, or whether it was just Astroturf, fake grass sown from above by well-financed right-wing interests such as the Koch brothers, who use their vast funds to influence policy.

“I don’t see anything wrong with successful coalitions that are sometimes described as strange bedfellows,” Pellegrini said. “When you work on an issue…you look at how to get it done.”

Meanwhile, the Tea Party is gearing up for the 2012 election season.

In the 2010 midterm elections, the Tea Party succeeded in helping candidates it supported win the Republican nomination for various seats.

Some of those candidates have gone on to win those seats in general elections, including several senators: Scott Brown (R-MA); Rand Paul (R-KY); Mike Lee (R-UT), who defeated Republican incumbent Bob Bennett; and Marco Rubio (R-FL), who defeated Charlie Crist, a moderate Republican governor running as an independent.

In other instances, however, a Democratic or independent candidate was able to win the general election because voters saw the Tea Party candidate, such as Joe Miller in Alaska or Christine O’Donnell in Delaware, as too far to the right.

“So many people involved in our movement had never been involved in politics before. They got to hear a presidential debate,” Martin said, adding that she hoped they could co-sponsor a debate in the general election as well.

Thompson said the Georgia affiliate had not yet decided which candidates it will support at the local, state and Congressional levels but that its members will meet within the next few months.

A separate organisation called Georgia Peach PAC, however, has released a list of Republican legislators in Georgia they are targeting as not being pure enough.

The main priorities for the Tea Party Patriots for 2012 include promoting its three core values, working on the full repeal of “ObamaCare”, getting a balanced federal budget within ten years without raising taxes, and opposing raising the federal debt ceiling.

Martin just completed several days of protesting healthcare reform in front of the Supreme Court, which heard oral arguments this week in various legal challenges to the healthcare law. Martin called the protests “America at her best”.

“Both sides were there (protesting). No fights broke out. We had shouting matches. We do care about the Constitution and the First Amendment, and love the fact we can express ourselves in front of government buildings.”