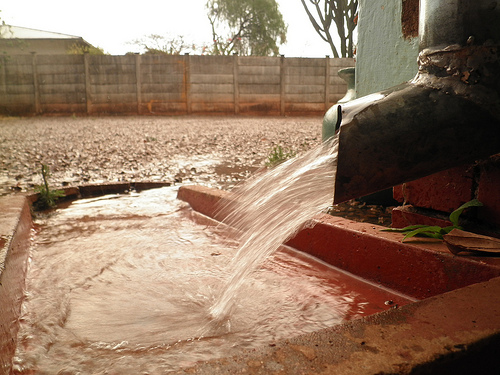 Bulawayo only has a 20-month supply of water left if the seasonal rains do not come. Credit: Busani Bafana/IPS

PLUMTREE, Mar 2 2012 (IPS) - Beauty Moyo’s desire for access to water has finally been met. The rains that fell in the past week after a long dry patch have awakened this small-holder farmer deep in rural Plumtree, Zimbabwe on the border with Botswana to the reality of sparse rainfall, climate change and how she and her fellow villagers can respond.

Plumtree, like most parts of southwestern Zimbabwe, is notorious for low rainfall. But millions of farmers in the country rely on rain-fed agriculture and food they grow themselves, which presents villagers like Moyo with tough choices.

“The rains that fell this week have been able to bring back hope as we had sunk our own reservoir to trap the water,” Moyo said.

She says she teamed up with other neighbours during the course of the year, and they invested their energies in digging what looks like a miniature golf-course waterway.

“This idea came after people realised we have been complaining each year about poor rainfall and harvests,” Moyo told IPS.

This reservoir water is used in farming activities where the subsistence farmers say instead of spraying the whole field with water, they now water individual plants.

“It’s a lot of work, but it helps conserve our water,” said Susan Mathebula, another villager working on the project with Moyo.

“We had heavy rains that we had not seen in a long time, with ice falling, and we were able to trap the water in this small catchment we set up ourselves,” Mathebula told IPS in mid-February.

While drinking water is available from such sources as boreholes, Mathebula says their major concern is water for irrigation purposes, as they plant their own food and cannot rely on rainfall alone for the maize and groundnuts they grow in their small fields.

Plumtree is one of the areas lying on the southwestern belt that experienced localised heavy downpours in the last week of February, with the Zimbabwe Meteorological Service Department announcing that the nation should expect more rainfall in the next two months.

Hope is returning that the water they have will ensure adequate household food security at a time when humanitarian agencies such as the Famine Early Warning System – Network (FEWS-NET) announced early this year that millions of Zimbabweans will require food aid.

Climate change and water shortages are among the issues being debated at a two-week session of the U.N. Commission on the Status of Women (CSW) Feb. 25 through Mar. 7 at U.N. headquarters in New York, which is focusing on the empowerment of rural women and their role in poverty and hunger eradication and sustainable development.

Aid agencies have tied food insecurity to climate change that has pushed rains in Zimbabwe far into the new year, when many farmers had prepared the land for the planting season in the last quarter of last year.

The rains began to fall in February, and the meteorological department announced that farmers can expect more rains in the next two months.

According the U.N. Food and Agriculture Organisation (FAO), women remain in the vanguard of farming in rural areas, which are home to 70 percent of Zimbabweans, and community-based initiatives such as the creation of reservoirs by Moyo, Mathebula and other villagers only highlight the dire circumstances these women find themselves in, with little assistance from government and nongovernmental organisations.

Josephine Conjwayo, an agricultural field officer from the Ministry of Agriculture who works with small-holder farmers, said harnessing water for agriculture by rural communities in response to climate change challenges has been limited by the absence of experts in rural areas.

“Every area (in Matebeleland) we have visited to assess farming activities, the issue of low rainfall and suffering crops is typical. Trapping rainwater is one of the measures we have encouraged for these women, but this water tends to be exhausted quickly as people use it for purposes other than farming,” Conjwayo said.

What has exacerbated the challenges faced by small-holders such as Mathebula is the inability by government and farming organisations to set up strategies for small-holders to respond to climate change, resulting in villagers coming up with their own initiatives.

The Zimbabwe Commercial Farmers Union says rural small-holder farmers are providing the bulk of maize consumed in urban areas, as these farmers do not sell their produce at the Grain Marketing Board, and laments the lack of government support for farmers.

Last year, the Climate and Development Knowledge Network partnered with the Zimbabwean government to map climate change policy, and according to preliminary research, changing rainfall patterns are expected, as well as temperature increases and extreme weather events such as floods and droughts.

It is these circumstances villagers in Plumtree are experiencing, and Mathebula, Moyo and many others respond the only way they know how: thinking on their feet.

“There is very little we can do here,” Moyo told IPS. “But we hope the water we trap will last us long enough to see our crops grow,” she said as she tended the small maize crop that is beginning to sprout after the recent downpours. (END)