BUENOS AIRES, Apr 5 2012 (IPS) - Former combatants in Argentina who took part in the 1982 Malvinas/Falkland Islands war are waging their final battle: they are trying to get the Supreme Court to classify the brutal mistreatment to which they were subjected by their officers as crimes against humanity. 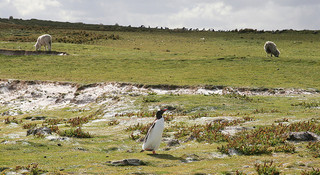 Sheep in the Malvinas/Falkland Islands in the South Atlantic. Credit: Strange Ones/CC BY 2.0

“We are the last collective victims of the (1976-1983) dictatorship,” Ernesto Alonso, a member of the Centre of Former Malvinas Islands Combatants in La Plata, the capital of the eastern province of Buenos Aires, told IPS.

On Apr. 2, 1982, the de facto regime suddenly invaded the South Atlantic archipelago, located about 480 km east of Argentina, which has been occupied by Britain since 1833.

The resulting 74-day war, which ended when Argentina surrendered on Jun. 14, cost the lives of 635 Argentine and 255 British soldiers.

There is abundant testimony from former Argentine combatants of cases of death by starvation and hypothermia, corporal punishment such as immersion in freezing water, mock firing squads, sexual abuse and other forms of mistreatment by officers and non-commissioned officers.

“For years we couldn’t talk about these things, but now it’s starting to become possible,” said Alonso, who added that he was optimistic that the Supreme Court would hand down a ruling that could put an end to the impunity surrounding these human rights crimes.

“What happened to us was in the context of the dictatorship. The same actors were involved,” said Alonso, referring to the military officers active in the de facto regime.

For that reason he is confident that, as prosecutions against members of the military charged with kidnapping, torture and forced disappearance move ahead in the courts, action will be taken with respect to the crimes committed in the Malvinas/Falkland Islands.

A score of Malvinas veterans filed the first legal action in 2007. The first instance court ruled that the abuses were crimes against humanity, which mean they were not subject to any statute of limitations.

The verdict was upheld by the court of second instance. But the defendants appealed to the Cámara de Casación Penal, which ruled in 2009 that crimes committed in the war should have been tried in the military courts, and that the statute of limitations had run out.

On the eve of the 30th anniversary of the invasion of the islands, 120 former combatants turned to the Supreme Court, which accepted the case.

The plaintiffs say that if the Court rules that no statute of limitations applies to their cases because they involve crimes against humanity, many more veterans who have not yet dared speak out will come forward and seek redress.

The legal action has the support of human rights activist and Nobel Peace Prize-winner Adolfo Pérez Esquivel, who is the president of the Provincial Commission for Memory, an independent body created by the Buenos Aires provincial legislature in 1999.

Some 80 officers and non-commissioned officers are accused of torture and other crimes against soldiers in the Malvinas, most of whom were young conscripts doing their obligatory military service.

Some of the defendants are already in prison accused of human rights crimes committed during the dictatorship, which “disappeared” some 30,000 people. But most of them are in active service or retired, and drawing pensions as veterans.

“The dictatorship had not ended on Apr. 2 (1982), and the torture continued over there,” during the war, former conscript Pablo de Benedetti, one of the plaintiffs, told IPS.

De Benedetti was 19 years old and had received less than two months of military training when he was sent to the Malvinas.

He was put to work laying landmines and slept in trenches where he survived in the middle of the southern hemisphere winter despite the shortage of food and the extreme cold.

His superior was a Sergeant Romero, who frequently punished him by forcing him into pools of freezing water and not letting him change out of his wet clothing afterwards. Winter temperatures in the Malvinas/Falklands can drop to 10 degrees Celsius below zero.

The veteran said the sergeant once put a rifle to his head and pulled the trigger, to frighten him. Romero also regularly shouted out the command “hit the dirt!” and ordered him to do frog jumps next to the minefield, as punishment.

“My legs starting swelling up and after a while I couldn’t walk,” de Benedetti said. “They took me to see the military doctor, who told me in front of Romero that I had to take medicine and could no longer be submerged in cold water or stay in wet clothes.”

But when de Benedetti returned to the trench, Romero said he would cure him, threw away the medicine, and forced him once again into the pool of freezing water.

By June, de Benedetti had to be hospitalised on the island, before he was transferred to the mainland. His feet were so swollen that his boots had to be cut off. He almost lost his legs.

When he was in the hospital in Puerto Belgrano, in Buenos Aires province, he was not allowed to call home to tell his family how and where he was.

“You can’t call because we’re still at war,” his superiors told him. But de Benedetti managed to get a wheelchair, pretended to go to the bathroom, and made it to the nurse’s station where he called his parents, who showed up at the hospital the next day.

The young conscript, who spent 20 days in the hospital, suffered serious physical and psychological consequences the first few years after the war, which his family was left on its own to deal with. Today, at the age of 49, he continues to take medication for the damages suffered in his feet and legs.

He is confident, though, that the Supreme Court will give the green light for trying these crimes. “I hope those officers will be demoted, and will be stripped of their benefits, honours and pensions. And above all, I hope they will go to prison for what they did,” he said.

Another plaintiff, Silvio Katz, finally decided to speak to the media a few years ago about the abuse and humiliations he suffered as a combatant in the Malvinas, which was aggravated by the fact that he is Jewish.

“F***ing Jew, Jewish fag, traitor” were some of the insults Katz received. He and other soldiers were forced to hold their hands in freezing water. But in his case, he was also forced to stick his face in.

On one occasion he was staked out on the frozen ground in his underwear and t-shirt, and his fellow soldiers were forced to urinate on him. “They even forced me to eat excrement. I will never forget that,” he said.

Katz said that shortly after he returned from the war, he saw his torturer, non-commissioned officer Eduardo Flores Ardoino, in the street, and peed his pants.