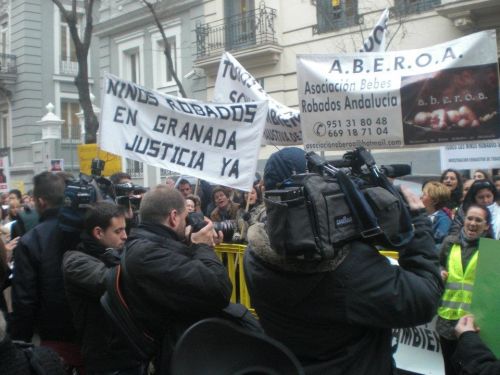 MÁLAGA, Spain, Apr 20 2012 (IPS) - An 80-year-old nun is the first person facing trial in Spain on charges of forming part of a secret network that allegedly stole hundreds of babies and sold them to couples without children.

The nun, María Gómez, has been charged with involvement in the 1982 disappearance of Pilar Alcalde, who was finally reunited with her biological mother in 2011. They filed the lawsuit together.

Between 1975 and 1990, a network of doctors, priests, nuns, public notaries and judges allegedly stole babies in clinics and hospitals mainly linked to religious organisations, and sold them to couples who could not have children.

The sister of the president of the Stolen Babies Association of Andalusía (ABEROA), Isabel Agüera, may have been one of the victims of the baby theft ring.

Agüera believes that her sister, who was born on Aug. 15, 1970, is alive, even though her mother was told that the baby died at birth in the Hospital Civil in the southern Spanish city of Málaga. The hospital staff told the mother not to worry because they had arranged to have the baby buried in the tomb of “a rich man.”

Agüera says “everything was done without prior authorisation.” Moreover, her mother was never shown the baby’s body, and no information was given to the father, who was working abroad and arrived a few days after the birth.

In her investigation, Agüera found “very little documentation, which at times does not even coincide with reality,” with regard to the dates, for example.

Recently, she found the name of her sister in the burial records of a Málaga cemetery, which indicate that the baby was buried in a common grave on Aug. 21, six days after she supposedly died.

María Gómez, the first to face charges in court for illegal detention and falsification of documents in connection with the network, refused to testify before the judge at an Apr. 12 hearing.

She later issued a statement denying the charges and said that separating a newborn from its mother was “repugnant.”

“Sister María told me she was taking my little girl away because I was an adulteress,” María Luisa Torres testified on Apr. 3.

Torres, who says she was lied to by Gómez, a Sisters of Charity nun who worked at the Santa Cristina Maternity Hospital in Madrid, was reunited 29 years later with her daughter Pilar Alcalde, who had spent years searching for her biological mother with her adoptive father’s help.

Some 1,800 cases of stolen children have been filed so far in public prosecutors’ offices across the country, Antonio Barroso, the head of ANADIR, an association of people searching for missing children or parents, told IPS.

The mothers were generally young, single and poor. Some were pressured into giving their babies up for adoption, while others were told that their babies had died, and that they weren’t shown the body because it would have been unnecessarily traumatic. The hospital was taking care of all burial arrangements, they were told.

“The problem is that there are many Sisters María Gómez,” said Barroso, who maintained that the nun was just one person in a broad network of priests, nuns, doctors and civil registry officials who took part in the baby theft scheme.

The victims’ associations “would really like someone to talk, to start unravelling things so that names (of other implicated persons) would start to appear,” Marina Palomo, the vice president of ABEROA, told IPS.

Last week, Justice Minister Alberto Ruíz Gallardón announced the creation of a database to help lost parents and children look for each other using modern DNA techniques. He also said a working group would be set up and coordinated by his ministry, with the participation of the ministries of the interior and health, and the state prosecution service.

After a meeting with representatives of the associations of people searching for missing children or parents, Ruíz Gallardón promised to attempt to solve “the terrible human drama” suffered by the victims, although he stressed that “there are no magic formulas to fix such a complex problem.:”

The president of ANADIR said he appreciated the government’s commitment to help, but added that “we have to wait and see if it becomes reality or if it will come to nothing.”

Barroso did not find out that he was a stolen child until he was 38, when a childhood friend told him that before his own father died, the elderly man confessed that both of them had been “bought” at a hospital in Zaragoza in northern Spain.

According to historians and human rights activists, the 1939-1975 dictatorship of General Francisco Franco systematically took children away from parents who supported the 1931-1936 Republican government or who fought on that side during the 1936-1939 civil war.

But there is evidence that the trafficking of babies continued not only during the transition to democracy after Franco’s death in 1975, but until as late as 1990.

And the estimates of the total number of children who were stolen, both during and after the dictatorship, vary widely. Some human rights activists and lawyers put the number in the tens of thousands.

Adopted children seeking their biological mothers and parents searching for their lost children run up against the same hurdle when they ask for documents at civil registries, hospitals and cemeteries, “where functionaries often refuse to hand the documents over, or don’t want to look for them, or say they don’t exist,” Barroso said.

“I’m looking for my twin sister,” Inmaculada Gómez told IPS. She has always believed that her sister did not die when her mother gave birth on Jun. 7, 1977 at the Hospital Civil in Málaga. “They didn’t show her (my sister’s) body, and they told her that they would take care of everything” related to the burial, Gómez said.

So far, 18 graves have been exhumed in the search for stolen children, and child remains have only been found in three of them – the rest of the coffins were empty, or contained the bones of adults or animals.

Barroso, whose association has 2,050 cases registered and a databank containing 1,200 DNA samples, said they are now awaiting the results of DNA testing.

ABEROA’s Marina Palomo, who reported that her brother, born in 1974 in the Carlos Haya Hospital in Málaga, was stolen, lamented that most of the cases have been shelved due to lack of evidence, or because judges have declared that the statute of limitations has run out.

But lawyers and academics argue that these crimes are ongoing. “We are asking the prosecutors to help us look through the archives, and to classify these cases in such a way that no statute of limitations applies to them,” Palomo said.

“The search is our priority,” Mar Soriano, who says her sister was stolen in 1954, told IPS.

Soriano created the Plataforma Afectados Clínicas de toda España, Causa Niños Robados, an association of people looking for stolen children, which criticised the “passive attitude” of the Catholic Church’s bishop’s conference with respect to the nun who is on trial.