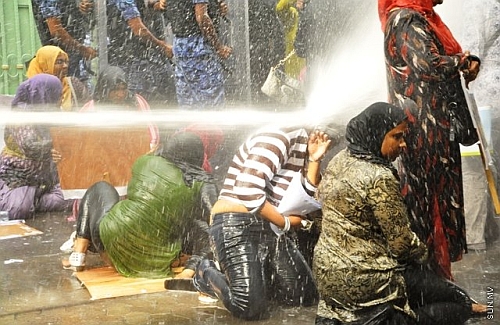 COLOMBO, Apr 3 2012 (IPS) - Maldivian women, long used to taking a backseat in the Muslim-dominated Indian Ocean country, say they are determined to ensure that they are not deprived of their rights under the new regime of President Mohammed Waheed Hassan.

Television footage of women battling police, soon after the Feb. 7 resignation of president Mohammed Nasheed, showed the new assertiveness of Maldivian women, even while wearing the ‘hijab’ or head-cover traditionally worn by Muslim women. Nasheed later claimed it was a coup against his elected government.

“Yes, life is changing in the Maldives with women asserting their rights more aggressively than before,” Mauroof Zakir, a young trade union activist, told IPS over telephone. “This is a new and exciting development.”

Zakir said Nasheed’s policy of providing free health insurance and allowances for single mothers was not lost on the women who have been taking to the streets in large numbers, confronting police and demanding reinstatement of his government.

“After the coup women want to express their views. They are very angry and disappointed at the sudden removal of an elected president and his government,” said Aishath Aniya, a prominent female activist and former secretary-general of Nasheed’s Maldivian Democratic Party (MDP).

“Women never took part in rallies or came onto the streets before, but now they readily attend rallies or speak in public to demand change,” said Aniya, who was among a group of female protestors who were arrested and stripped naked by a group of policewomen after one protest.

“We were able to muster as many as 8,000 women at some of the rallies,” Aniya told IPS in a telephone interview.

Females account for slightly less than half of the estimated 350,000-strong Maldivian population.

Nasheed, a former journalist educated in Britain, led the MDP during a massive campaign for democracy in the Maldives before winning the elections held in November 2008 and defeating Maumoon Abdul Gayoom, 74, who had ruled the country with an iron fist for 30 years.

Nasheed’s ouster is widely believed to have been orchestrated by Gayoom and his allies, though the former president has repeatedly denied involvement.

Also, Abdul Samad Abdulla, Maldivian envoy to Bangladesh during Gayoom’s rule, is foreign minister while the finance minister is Abdulla Jihad, who held the same portfolio under Gayoom.

Shifa Mohamed, a frontline women’s leader of the MDP, says quite a few women work in the country’s civil service but not at policy or decision-making levels. “Men have traditionally dominated these positions,” she said.

Shifa told IPS that Nasheed understood the issues facing women and tried to address their concerns by coming up with schemes like health insurance and improving transportation to schools and health clinics.

Aniya believes women became more empowered under Nasheed’s governance and points to how he improved transportation, an important issue on the islands. “Earlier when someone fell ill residents were forced to plead with boat owners for a ride to the nearest clinic or hospital – and often refused.”

Today under a state-subsidised system, there are regular ferries between the islands, she said. “Women being the main caregivers felt the difference in approach.”

Shifa said women are anxious that there is no return to the past. “During Gayoom’s rule, even if women voted massively against him, the results would show 100 percent support.

“That was the kind of repression felt not just by women but by everyone and that is why women feel compelled to stand up for their rights and for the benefit of the next generation of Maldivians.”

Nasheed, while in power, had openly advocated a moderate brand of Islam and spoken up against such practices as female genital mutilation, child marriage and the public flogging of women for adultery.

Nasheed had also backed a controversial domestic violence bill aimed at providing female victims emergency protection and easing a woman’s ability to resort to divorce. The bill has remained in the Majlis or parliament for over a year.

A government spokesman contacted by IPS disputed the claim of large numbers of women turning out for protests against the Waheed regime, saying they consist mostly of relatives or friends of Nasheed.

“Their (MDP) claims are all nonsense. I would reckon the numbers taking part are around 200 to 300 or less. The problem is that the capital has many small alleys and even a small number of women looks like a large crowd and provides nice video,” said Imad Mazood, spokesman for President Waheed. “Male is like a studio.”

Foreign media began converging on Male a few days before Nasheed resigned and, as tensions rose, footage unflattering to the new regime was carried on social media networks like YouTube and by international TV channels.

Mazood said with Male’s population comprising a sizable number of foreigners, mostly Bangladeshis, Sri Lankans and Indians, it is impossible to muster 8,000 women for a rally. “You won’t get even half that number.”

There are over 100,000 foreign workers in the Maldives, the majority employed in the country’s main industry of international tourism.

Mohamed Latheef, a founder of the MDP and widely seen as Nasheed’s mentor, admits that it is difficult to accurately estimate the number of women involved in protests and rallies.

“Society in Male is so polarised that it is an ‘us versus them’ situation,” he said, speaking to IPS in Colombo where he lives in exile.

Amnesty International (AI), the London-based rights group, has voiced concern over attacks against women protestors, referring in particular to a Feb. 26 march.

AI said a group of peaceful women protestors was “charged by soldiers who wielded batons and used pepper spray, pushed them around, and kicked them on their legs and ribs,” as they moved towards a public meeting on Addu island, addressed by President Waheed.

Aniya said, after a protest march on Mar. 19, she and 12 other women were body-searched and stripped naked. “They took urine samples and wanted to pin charges of drugs use on us, similar to the kind of false charges earlier used against opponents of the Gayoom regime.”

But, Aniya said, such tactics are not going to deter the women from joining the rallies against the new regime. “Many of them are determined to protest for 24 hours, even daily, till president Nasheed is reinstated.”