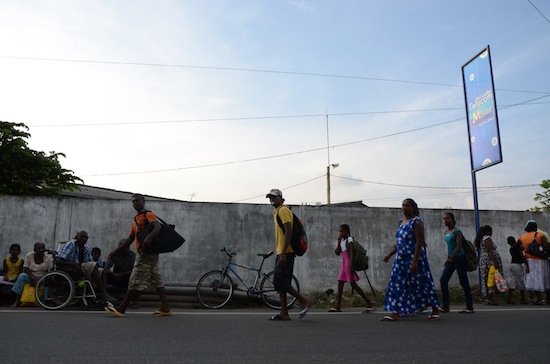 COLOMBO, Apr 11 2012 (IPS) - The fear was palpable for Mohideen Ajeemal when he heard the news of an 8.6 magnitude earthquake off the coast of Indonesia on Apr. 11. The last time an earthquake of similar magnitude hit the same area, Ajeemal lost two of his children, a young daughter and an infant son, when massive tsunami waves crashed onto his house on the eastern coast of Sri Lanka on the morning of Dec. 26, 2004.

“When the police jeep began announcing the evacuations, we were already on the move,” Ajeemal, a resident of the village of Sainathimaruthu, in the eastern Kalmunai region, told IPS.

In 2004 there was no such warning and the monstrous waves left 30,000 dead, a million displaced and a reconstruction bill of over three billion dollars.

“This time people knew what to expect, they knew they had to get away from the beach and do that fast,” Ajeemal said.

In double-quick time, the Meteorological Department issued a warning: “An earthquake near Sumatra Island at 02.08pm (Sri Lanka time) today 11.04.2012 has generated a tsunami that will affect Sri Lanka, those living near and along the Eastern and Southern coastal regions are advised to evacuate to safer places immediately.”

The warning came despite the United States government’s Pacific Tsunami Warning Centre failing to issue a formal alert, instead limiting its update on the earthquake to a ‘tsunami watch’. However, local radio and television stations picked up the warning, which was also disseminated by SMS alerts and Sri Lanka’s small but active Twitter community.

Those on the coast, like Ajeemal, were advised by the police to move at least 500 metres inland. “We were asked to remain there till around six (o’clock in the evening),” Ajeemal said. The warning period was later extended when aftershocks hit the island about two hours after the initial quake hit Indonesia’s western coast of Sumatra, in Banda Aceh.

“Almost everyone has moved out of the coast, no one is here,” said Reverend G S K Herath, an Anglican priest from the southern town of Matara. He told IPS that security forces and the police had moved into the areas being evacuated to guard against looting.

“The only people who remain now in the town other than the security forces are journalists and cameramen perched on high-rises, waiting for the waves to come,” Herath said.

The media’s swift response is partly due to the shock of 2004 when the tsunami woke the country, which was deep in its Boxing Day stupor, to the utterly destructive power of natural disasters.

Now, the coast that was pulverized by the 2004 tragedy is dotted with small blue boards on the roadside, indicating higher ground to move to in case of a tsunami.

But the systems have not always worked effectively and have, on some occasions, failed abysmally.

In November last year, neither the Meteorological Department nor the DMC issued a warning before gale force winds hit southern Sri Lanka, killing 29 people, mainly fishermen, and damaging over 10,000 buildings. The two state agencies faced heavy criticism for the fiasco.

However, on Apr. 11, the system seems to have worked smoothly.

“We have put so much energy and resources into the early warning systems after the 2004 tragedy, this time we could find out how effective they were,” Mahieash Johnney, communications and reporting manager for the Sri Lankan delegation of the International Federation of the Red Cross and Red Crescent Societies, told IPS.

The Sri Lanka Red Cross (SLRC) swiftly mobilised its volunteers in coastal areas to help in the evacuations and requested its staff to be available to assist government agencies.

In some areas like the eastern town of Batticaloa, Red Cross volunteers used boats to move people living on islands, or in areas cut off by floods, to safety.

“We will have drills once every three months or so, to keep the people alert on how to face these kind of situations. This time, we had to do it for real,” Johnney said. The SLRC had invested over 1.2 million dollars on early warning mechanisms, with a focus on the eastern coast that was hit hardest in 2004, he told IPS. “It is good to see the investment (paying off).”

Ajeemal added that villagers like him had undergone awareness campaigns since the tsunami on how to deal with such events.

Nandasa, a resident living on the beach in Rathmalana, a suburb just south of Colombo, expressed a similar sentiment. “In 2004, when waters receded before the tsunami came, people took it for a joke, they went out to collect shells. This time no one was taking things lightly, everyone knew what to do and what to expect.”

Still, there were some lapses. As coastal roads were closed, others became jammed with traffic, mobile networks became overloaded and petrol stations in coastal areas ran out of fuel, leaving many people stranded.

But overall, the harsh lessons from 2004 seem to have been learned.