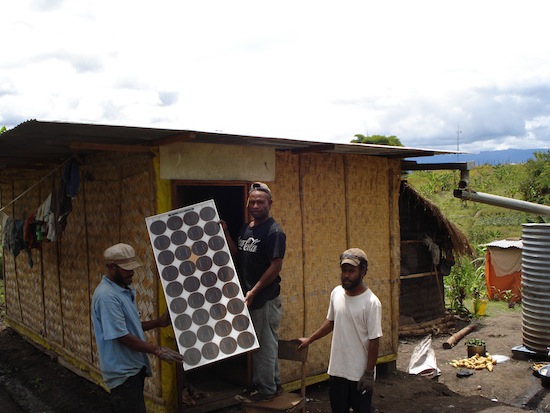 Ten years ago Nick Nait, who lives in a small village near Mount Sion in the Eastern Highlands with his wife and children, introduced electricity to his household for the first time. While working for a missionary organisation Nait learnt how to make solar power systems and subsequently built a small one for his two-room dwelling.

The single solar panel powers a radio, lighting and television.

For Nait, solar power is affordable and dependable. “It depends on the weather, but when there is sun, there is no problem,” he said, “It is very reliable and I rarely have to do repairs.”

After the initial cost of making and installing the solar unit, he has had few ongoing expenses and, once fully charged, the system will provide light in his home for one month.

Like Nait, many people living in the rural Highlands face economic and environmental challenges. Garaio Gafiye of Clean Energy Solutions, a consultancy for renewable energy projects in PNG, told IPS, “The Highlands is a very rugged area and there are so many communities. Renewable energy is very important, especially hydro, there is so much of it, and solar also. But the problem is incomes are very low in the Highlands and managing money can be quite difficult.”

Families have been forced to become very resourceful in order to access energy at minimal expense.

“Solar is very easy to install,” Gafiye continued, “Now if you go to some of the communities, (at least) one or two people have solar systems, just simple ones. They just get the panel and a battery and put it together.”

Obtaining sustainable electricity has made a vital difference to Nait’s family.

“We now have lighting in our home, access to information and the news from radio and TV and my children can do their school work and study in the evenings,” Nait explained, “Although we do not have an electric stove, my wife finds it very helpful to have lighting while she is cooking at home.”

Now he plans to expand the capacity of his solar unit to drive a water pump and eventually bring clean water from a nearby well to his home.

According to the International Energy Agency (IEA), without access to energy, developing countries become trapped in poverty. The denial of choices to improve human development through energy is known to negatively impact infant mortality, life expectancy and income generation, among many others.

Sadly, this year, the International Year of Sustainable Energy for All, the IEA estimates that 1.4 billion people, or nearly one quarter of the world’s population, remain without access to electricity.

PNG Power Limited, the nation’s only power provider, claims it is unfeasible to construct a national grid system due to dense mountainous topography and long distances between load centres. Therefore, many villages still rely on traditional biomass, such as firewood, for cooking and heating, with diesel generators providing a popular alternative. But the high price of fuel means that generators are used sparingly, often for no more than a few hours each day.

“It is very cheap to purchase a diesel engine, but it won’t last long,” Gafiye said, “It could last four or five years but after that, if you work out the economics, it is not (cost efficient) to keep running it.”

Renewable technologies, which are practical for standalone systems and provide power 24 hours per day, are the best option for those living in remote areas.

According to the International Renewable Energy Agency (IRENA), the total primary energy supply in PNG is 145.9 petajoules (PJ), of which renewable energy accounts for 115.2 PJ (roughly 79 percent).

Electrical capacity is 699 megawatts, with renewable electricity comprising 271 MW (about 39 percent of the total). Hydroelectricity presently accounts for 65 percent of PNG Power’s electricity provision and also supplies all the electricity required to implement the government’s Rural Electrification Programme.

Jacob Yala, who works for the Rural Electrification Programme in the Eastern Highlands, said it was a very good state initiative, but there were labour and logistical challenges.

“The PNG Power training college in Port Moresby has not been operating for some time,” Yala said. “So for the past five years, we have experienced a manpower shortage. We’ve got five regions in Papua New Guinea to work (but) we cannot develop all the regions at the same time.”

“In 2009, we began a 42-kilometre electrification project near Kainantu, but could only energise a seven- kilometre stretch because road access to the area was too difficult,” Yala continued.

The programme now focuses on providing electricity to community service centres, such as medical clinics, hospitals and schools.

Meanwhile, for village households where livelihoods mostly centre on subsistence agriculture, solar can be more viable than hydro power.

“Solar is successful, it is not a problem,” Gafiye said. “But for hydro, one kilowatt in the Highlands will cost 20,000-30,000 kina. In the coastal area, where there are wharves, it is cheaper because transportation costs are almost nil. But once you transport materials up by air and land (into the Highlands), the cost will increase.”

Solar equipment can be readily acquired in PNG, but turbine generators for hydroelectric schemes have to be custom made by an overseas manufacturer.

Renewable energy will be critical to sustainable development in Papua New Guinea, and the wider Pacific Islands, as they confront high fossil fuel costs and the impacts of climate change.

In 2007, the Pacific Islands Greenhouse Gas Abatement through Renewable Energy Project (PIGGAREP) was initiated by the Secretariat of the Pacific Regional Environment Programme (SPREP). Funded by the Global Environment Facility and United Nations Development Programme (UNDP), the project aims to address impediments to the widespread implementation and use of renewable energy technologies by Pacific Island states.

Meanwhile Papua New Guinea’s investment in the renewable sector could significantly expand if a proposed joint venture, between PNG Sustainable Development Programme Limited and the Australian company Origin Energy, proceeds, following a feasibility study. The Purari Hydro-Electric Project would draw on the capacity of the Purari River in the Gulf Province to generate an estimated 1800 megawatts of renewable electricity for rural communities and public service providers.