RIO DE JANEIRO, May 30 2012 (IPS) - Less than 45 years ago, the Paiter-Suruí, an indigenous people living deep inside the Amazon rainforest in Brazil, had never been in contact with the outside world. Today they hope to ensure their survival through the complex mechanisms of the carbon market.

Inhabitants of the Sete de Setembro territory, an area of around 250,000 hectares stretching between the states of Rondônia and Mato Grosso near the border with Bolivia, the Paiter-Suruí have experienced a tumultuous history over the past few decades. 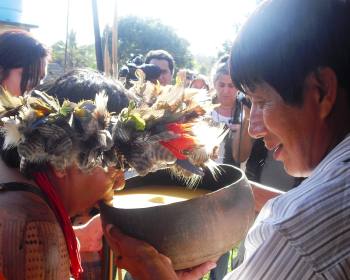 Just three years after their first contact with outsiders in 1969, they came close to total extinction: their population of 5,000 was reduced to a mere 300 by the diseases brought by the invaders of their territory. Today they number 1,350 and are determined to survive.

Suruí is the name the anthropologists gave them. Paiter is what they call themselves: it means “we, the true people” in the Tupí-Mondé language that they speak.

The Suruí Forest Carbon Project, established by the Paiter-Suruí community four years ago and officially certified in April, involves mechanisms to offset carbon dioxide emissions such as preventing deforestation, to keep carbon stored in the trees, and reforestation, to absorb carbon from the atmosphere.

These mechanisms form part of the Reducing Emissions from Deforestation and Forest Degradation scheme, or REDD+, promoted by the United Nations as a means to mitigate climate change.

The buying and selling of certified emissions reductions or carbon credits allows countries or companies that are net producers of greenhouse gas emissions to offset their emissions, and thus meet their climate change mitigation commitments, by paying others to implement emissions-reducing initiatives.

After decades of struggling to protect the rainforest from incursions by loggers, miners, poachers and settlers, since 2005 the Paiter-Suruí have planted 14,000 trees from 17 native species, including cocoa and coffee trees, precious hardwood trees like mahogany, and fruit trees such as açaí palms.

“We want to benefit our people and develop in accordance with our needs in the region, placing value on what the forest produces. A green economy policy essentially means planning for sustainable use,” Chief Almir Suruí, the leader of the Paiter-Suruí people and a member of the Coordination of Indigenous Organizations of the Brazilian Amazon, told Tierramérica.

Chief Almir, 38, always wears body paint and necklaces of native seeds made by the women of his community. Although he wears Western clothing for meetings outside his village, the body paint is never fully hidden.

Before becoming known in Brazil, he had earned international recognition for denouncing illegal logging on his people’s land to the Organisation of American States (OAS) and for defending the rights and integrity of peoples living in voluntary isolation, as well as fighting against the construction of hydroelectric dams on the rivers of Rondônia.

To achieve their sustainability goals, the Paiter-Suruí work in partnership with various non-governmental organisations and government institutions, such as the Brazilian Biodiversity Fund (Funbio), a state agency that facilitates the creation of financial mechanisms and tools to guarantee income for the community.

The Suruí Carbon Project involves the conservation of more than 12,000 hectares of forest for a period of 30 years, Angelo Dos Santos, a Funbio coordinator, told Tierramérica.

“For every year of the project, the Suruí guarantee that a certain volume of carbon will not be emitted, and it will be offered on the carbon market,” he explained.

“Over the next 30 years, the Suruí people will accumulate eight million tons of carbon dioxide through avoided deforestation.” By selling these avoided emissions on the carbon market, “they will be paid for not deforesting,” said Dos Santos.

It is estimated that the community will collect a total of 40 million dollars over the course of the project, based on the current market price of five dollars per ton of carbon.

According to Dos Santos, there are various ways the resulting carbon credits can be marketed. They could, for example, be purchased by companies seeking to offset their own emissions of this greenhouse gas. “This is a great innovation,” he said.

The money earned through the sale of carbon credits will go into the Paiter-Suruí Carbon Fund, created for the implementation of a development plan based on means of generating income without destroying the forest.

The Paiter-Suruí already produce more than 4,000 tons of organic coffee and 10,000 tons of cashew nuts, reported Chief Almir, with business plans created for both production lines.

In the meantime, “the Paiter-Suruí Fund will collect resources from donations, multilateral banks, companies and the sale of carbon credits,” said Dos Santos.

The immediate goal is to gather six million dollars in the next three years. In six years, the Fund will be fully managed by the Paiter-Suruí, who are already being trained by Funbio, the current fund administrators, to take over.

This is clearly an exceptional case: the first financial mechanism created by an indigenous community to ensure its survival and safeguard its way of life.

Initiatives like these earned Chief Almir 53rd place on the list of the 100 Most Creative People in Business in 2011, compiled by the U.S. magazine Fast Company.

Earlier this month, he was invited to talk to business leaders and researchers about innovation at a conference organised by the British magazine, The Economist.