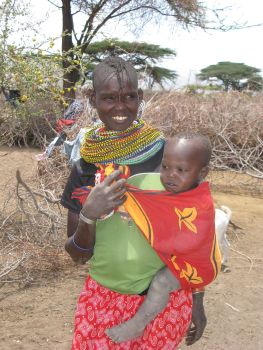 And 90 percent of maternal deaths occur in the world’s 132 developing nations, according to U.N. estimates.

Still, there are hopeful signs in the horizon, says a new report jointly commissioned by the World Health Organisation (WHO), the U.N. Population Fund (UNFPA), the World Bank and the U.N. children’s agency UNICEF.

According to new figures released Wednesday, the number of women dying of childbirth-related complications has almost halved in the last 20 years.

While substantial progress has been achieved in almost all regions, many countries, particularly in sub-Saharan Africa, will fail to reach the Millennium Development Goal (MDG) target of reducing maternal death by 75 percent through 2015.

“I am very pleased to see that the number of women dying in pregnancy and childbirth continues to decline,” said UNFPA’s Executive Director Dr. Babatunde Osotimehin.

This shows that the enhanced effort of countries, supported by UNFPA and other development partners, is paying off, he added.

“But we can’t stop here. Our work must continue to make every pregnancy wanted and every childbirth safe,” Dr. Osotimehin said.

Still, disparity exists within and across countries and regions, according to the report.

Of the 40 countries with the world’s highest rates of maternal death, 36 are in sub-Saharan Africa.

The report also highlights the fact that in 2010, the global maternal mortality ratio was 210 maternal deaths per 100,000 live births.

In sub-Saharan Africa, a woman faces a one in 39 lifetime risk of dying due to pregnancy or childbirth-related complications.

“An important challenge that makes it difficult to assess progress accurately is the lack of reliable information about maternal deaths,” the report notes.

In many developing countries, deaths may go uncounted and frequently the cause is not recorded correctly, particularly when women die at home.

This has been accounted for in the current analyses of estimates, according to the report.

In a statement released here, Osotimehin says his agency knows exactly what to do to prevent maternal deaths: improve access to family planning, invest in health workers with midwifery skills and ensure access to emergency obstetric care when complications arise.

“These interventions have proven to save lives and accelerate progress towards meeting the Millennium Development Goal 5 on maternal health,” he said.

Over a quarter of a million women still die in pregnancy and childbirth each year, and more than 215 million women lack access to modern contraceptives, he added.

Meeting the need for voluntary family planning for these women would not only fulfill a human right, it would also reduce the number of maternal deaths by a third, he added, pointing out that “this is a highly cost-effective public health strategy.

“It is excellent that improved access to family planning is getting back on the development agenda after being overlooked for too many years. We at the U.N. Population Fund will do our best to garner support for this critical investment to ensure the rights and health of women and girls.

“These new estimates demonstrate how maternal health is progressing globally and how the quality of data is improving. This also shows how the U.N. works together to improve the situation for women and girls around the world,” he said.