AMMAN, May 12 2012 (IPS) - The Arab Spring sent scores of sick and injured Libyans, fleeing their war- torn country, straight to Jordan, where the influx of patients is putting a lot of pressure on Jordanian hospitals and disrupting the lives of Libyan and Jordanian patients alike. 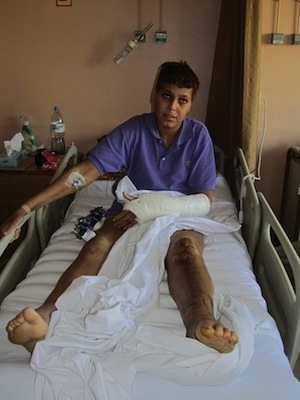 “Hospitals have stopped admitting Libyan patients, with the exception of emergency cases and those who can pay cash up front. It’s a very difficult situation for patients, especially those undergoing cancer or in vitro fertilisation (IVF) treatments,” Awni Bashir, former minister of social development and head of the Chmeisani hospital and the Jordanian Association of Private Hospitals, told IPS.

In the last six months alone about 52,000 Libyan patients sought treatment in Jordan; today, about 15,000 remain.

Stress of overcapacity in hospitals might explain several recent cases of patients’ distraught family members assaulting medical staff. “The number of attacks is still minimal with about 10 to 12 cases recorded this year,” said Bashir.

But another crisis might be looming on Jordan’s horizon, which is home to about 100,000 Syrian refugees.

“Syrian patients are starting to trickle in and we worry that we might face a similar situation in the next few months,” Bashir said.

The popular uprising in Libya last year ended the 40-year dictatorship of Muammar Gaddafi but not before it claimed thousands of lives and left countless Libyans injured.

While driving from Ajdabiya to Benghazi during the Libyan revolution, rebel fighter Faraj Fakhri’s motorcade came under heavy fire. His car crashed and his body was riddled with bullets. Fakhri now sits in Amman’s Chmeisani hospital. He has been operated on twice and is waiting to undergo three more operations.

“Thank God almighty I can now move my leg. I came to Jordan to be operated on, as my country does not have the same medical facilities, especially in the current situation,” he said, looking down at his torn up leg.

Sharing Fakhri’s room is Hajj Omar, a patient in his seventies who has also undergone a leg operation. “The doctor operated on me out of the goodness of his heart. I was in pain and hospitals were refusing to treat Libyans like me because we couldn’t afford to pay for our care,” said Omar.

Since 2006, Jordan has specialised in medical tourism, providing tens of thousands of people with cosmetic surgery, neurological surgery, orthopaedic care, organ transplants, fertility treatments and cancer procedures. The country’s medical tourism industry contributes four percent of the national gross domestic product (GDP) and earns about a billion dollars a year, according to the Oxford Business Group.

But the flood of casualties from the Libyan revolution has wreaked havoc on the sector.

“We were receiving 18 planes every week, with most Libyans heading directly to our hospitals, (putting) significant pressure on our medical sector,” said Ahmad Rajaei al-Hiari, director of the Medical Tourism Directorate in the country.

Similarities in language, culture and tradition, the absence of visa requirements for Libyans and convenient direct flights between Amman and Tripoli attracted a multitude of Libyan patients.

There is now a serious shortage of beds for Jordanian patients, forcing private hospitals to keep 10 percent of emergency beds free for nationals. The medical sector has a total of about 4,000 beds in private hospitals, and another 8,000 in public institutions.

The problem is not limited to the hospitals; Libyan patients are also utilising tourism facilities like hotels, restaurants and car rental services. “Some hotels are simply refusing Libyan guests until payment is made,” said a healthcare source.

Others have asked Libyan guests to vacate their rooms by the end of the week, unless they can settle their bills in cash.

The situation is exerting a heavy financial burden on the Hashemite Kingdom; Amman and Tripoli are now locked in a financial dispute over Libya’s outstanding debt of 200 million dollars for unpaid “medical bills as well as accommodation expenses.”

The new Libyan government made a 65-million-dollar payment to the Kingdom’s hospitals and hotels last month. Earlier this week Libya transferred an additional 60 million dollars to Jordan.

In the meantime, hospitals are experiencing a shortage of funds and cash flow difficulties, which in turn have impacted the medical supply chain. As a result, the Kingdom’s hospitals currently owe more than 65 million dollars to medical equipment suppliers.

About 20 percent of all Libyan patients treated in Jordan were wounded during last year’s conflict; others were seeking care for problems related to nerves, vision, cancer or infertility.