U.S. Lifestyle Is Not Up for Negotiation 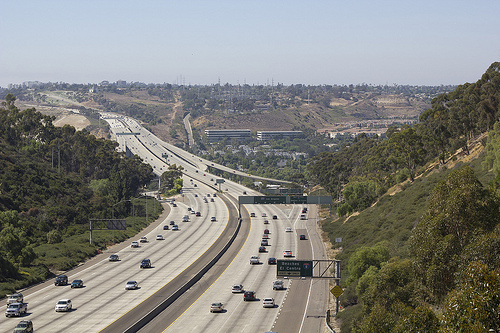 The Earth's capacity to meet human needs is finite, and depends on lifestyle choices and associated consumption. Credit: John Snape/CC BY 2.0

UNITED NATIONS, May 1 2012 (IPS) - Just before the 1992 Earth Summit in Rio de Janeiro, some of the industrial nations, and specifically the United States, were lambasted for their obscenely high consumption of the world’s finite resources, including food, water and energy.

The world was being gradually destroyed, environmentalists warned, by unsustainable consumption.

Hitting back at critics, then U.S. president George H.W. Bush famously declared: “The American way of life is not up for negotiations. Period.”

The message, a pre-emptive diplomatic strike by the United States, reverberated throughout the summit of world leaders, whose plan of action for the 21st century virtually skirted the hot political issue.

Now, 20 years later, the United Nations will once again focus on population, consumption and the environment at the U.N. Conference on Sustainable Development (also known as Rio+20) in mid-June in Brazil.

The upcoming summit will adopt a new plan of action for a greener economy and a sustainable future.

A new 134-page study, released on the eve of the summit, and titled “People and the Planet“, highlights the rapid and widespread changes in the world’s population and the unprecedented levels of consumption that are threatening the well being of the planet.

Authored by the Royal Society, a 352-year-old institution described as a fellowship of the world’s most eminent scientists, the study says the Earth’s capacity to meet human needs is finite.

But how the limits are approached depends on lifestyle choices and associated consumption – and these depend on what is used, and how, and what is regarded as essential for human wellbeing.

The members of the Royal Society’s glorious past include some of the world’s illustrious scientists and thinkers of a bygone era, the likes of Isaac Newton, Charles Darwin, James Watson and Albert Einstein.

Presenting the report on behalf of the Royal Society, Nobel Laureate Sir John Sulston told reporters Tuesday there is a strong link between population, consumption and the environment.

The unsustainable consumption of the world’s most developed and emerging economies must be urgently reduced, he said.

The increase in “material consumption”, he said, involved food, water, energy and minerals.

And as the report points out, “these resources are the most basic needs for survival, and in some parts of the world even these basic needs are not being met for some people.”

By contrast, high levels of material consumption seen in many parts of the world “may lead eventually to loss of well being for the consumer, and, in an inequitable world with finite resources, also result in the deprivation of others.”

The 21st century is a critical period for people and the planet, says the study, pointing out that the global population, which reached 7.0 billion during 2011, will reach between eight and 11 billion by 2050.

“Human impact on the Earth raises serious concerns, and in the richest parts of the world per capita material consumption is far above the level that can be sustained for everyone in a population of seven billion or more.”

This is in stark contrast to the world’s 1.3 billion poorest people, who need to consume more in order to be raised out of extreme poverty.

As both continue to rise, signs of unwanted impacts and feedback (such as climate change reducing crop yields in some areas) and of irreversible changes (such as the increased rate of species extinction) are “growing alarmingly”.

“The relationship between population, consumption and the environment is not straightforward, as the natural environment and human socio- economic systems are complex in their own right.”

Demographic change is driven by economic development, social and cultural factors as well as environmental change. A transition from high to low birth and death rates has occurred in various cultures, in widely different socioeconomic settings, and at different rates, the study adds.

And countries such as Iran and South Korea have moved through the phases of this transition much more rapidly than Europe or North America.

This has brought with it challenges different from those that were experienced by the more developed countries as they reached the late stages of the transition.

Developing countries will be building the equivalent of a city of a million people every five days from now to 2050, the study predicts.

And the continuing and rapid growth of the urban population is having a marked bearing on lifestyle and behaviour: how and what they consume, how many children they have, the type of employment they undertake.

Urban planning is essential to avoid the spread of slums, which are highly deleterious to the welfare of individuals and societies, the study notes.

In a series of recommendations, the study calls on the international community to bring the 1.3 billion people living on less than 1.25 dollars per day out of absolute poverty, and reduce the inequality that persists in the world today.

Additionally, the most developed and the emerging economies must stabilise and then reduce material consumption levels through dramatic improvements in resource use efficiency, including reducing waste; investment in sustainable resources, technologies and infrastructures; and systematically decoupling economic activity from environmental impact.

Population and the environment should not be considered as two separate issues, the study says.

“Demographic changes, and the influences on them, should be factored into economic and environmental debate and planning at international meetings, such as the Rio+20 Conference on Sustainable Development and subsequent meetings,” it says.

Also, governments should realise the potential of urbanisation to reduce material consumption and environmental impact through efficiency measures.

And in order to meet previously agreed goals for universal education, policy makers in countries with low school attendance need to work with international funders and organisations, such as U.N. Educational, Scientific and Cultural Organisation (UNESCO), the U.N. Population Fund (UNFPA), the U.N. children’s agency UNICEF, the International Monetary Fund (IMF), World Bank and Education for All.