BUENOS AIRES, Jun 6 2012 (IPS) - In Latin America, the distribution of laptops in public schools, an effort that has enjoyed success in countries like Argentina, Uruguay and Venezuela, is being studied by the governments of other nations interested in learning from their experience about the challenges that can be expected.

In 2009, Uruguay became the first country in the world to distribute a laptop to every primary school child in public education.

Government officials, technical experts and teachers from nine Latin American countries took part in the third congress on public policies on educational technologies, held Tuesday Jun. 5 at the Education Ministry in Buenos Aires. The meeting was organised by the Consorcio Educativo Tecnológico(CEDUTEC), which groups public and private organisations involved in training in new information and communication technologies (ICTs). 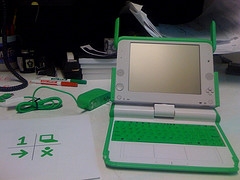 The Education Ministry’s chief advisor, Pablo Urquiza, said the Conectar Igualdad (Connect Equality) programme, which has distributed 1.8 million laptops to students and teachers around the country since 2009, is the ministry’s “flagship project”.

Laptops have been distributed to secondary school students and teachers, special education schools, and teacher training institutes across the country. The goal is to reach a total of 3.7 million computers.

The programme has faced a number of challenges, the authorities who worked on Conectar Igualdad said at the congress. These include achieving sustained financing, local production of inputs, connectivity in schools in remote areas, teacher training, creation of contents, laptop security, and recycling.

Argentina’s programme was inspired by Plan Ceibal, launched five years ago in neighbouring Uruguay, which has already delivered 570,000 computers to primary school students and teachers, covering all public schools to date.

The Uruguayan and Argentine programmes follow the “one laptop per child” model – a departure from the computer labs that are the norm in private schools in the two countries, where students visit a room equipped with computers for a few hours per week.

Teachers in Argentina and Uruguay are also given their own computers.

Venezuela, meanwhile, launched the Canaima Educativo “Va a mi Casa” project in 2010, distributing 525,0000 laptops to primary school students. As in Uruguay and Argentina, the children can take them home, to help their families enter the digital age.

Venezuela announced that it would expand the programme to include secondary schools this year, and that the 500,000 “canaimas” – as the children’s laptops are called – which are needed every year in the country will begin to be produced locally.

Graciela Rabajoli, head of the Plan Ceibal’s contents area, told IPS that the programme had received so many requests for advice from abroad that they had to organise a unit that offers services and consulting to other countries.

“We were recently in Armenia and Ecuador,” she said. “We designed training courses for Ecuador and went there to teach them. In other cases, we have transferred technology on logistics, purchasing, and the recycling of used computers.”

“Without the help of Uruguay, which opened its doors to us, it would not have been possible to implement the programme here,” he told IPS.

The representatives of Argentina and Uruguay generated enthusiasm over the prospect of not only narrowing the digital gap but bolstering economic development within each country while doing so.

But they also discussed the difficulties. “The big bottleneck is teacher training,” said Rabajoli. “There is no single formula for this, but what we do know is that if the teachers haven’t been trained, there’s no way to implement the programme.”

While the effort is now expanding in primary schools in Argentina, where one laptop is distributed for every four students, Uruguay’s Plan Ceibal has stretched to the secondary education level.

These policies make it necessary to produce more inputs and services, which not only generates value and jobs, but contributes to both domestic sales and exports to other countries in the region.

The undersecretary of management technologies in the eastern province of Buenos Aires, Eduardo Thill, told IPS that since the Conectar Igualdad plan got underway in 2009, the production of electronic goods had sharply increased.

“In 2009, some 300,000 ‘netbooks’ were assembled here, and now we are fully manufacturing four million,” he said. “An industry that should become sustainable is emerging.”

According to Thill, the Ministry of Industry projects that more than eight million laptops will be produced in 2013, some of which will be exported to other countries in the region that are developing their own educational digital inclusion plans.

One of the speakers at the meeting, Lilia Peña, general director of science and educational innovation in Paraguay’s Education Ministry, said 90 percent of schools in her country are public and 92 percent of the ministry’s budget goes towards salaries – a situation that makes it difficult to implement the one laptop per child model.

But she said they are working on training teachers and reducing the digital divide through the use of interactive whiteboards, mobile computer labs, and special classrooms for the incorporation of ICTs.

The process of distributing computers has also begun, with a call for bids for the provision of laptops for 40,000 teachers.