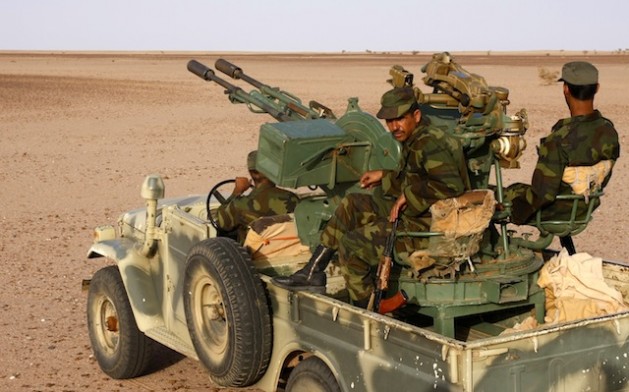 BIR LEHLU, Sahara Liberated Territories, Jun 20 2012 (IPS) - The road vanishes under the sand just after the border crossing at Tindouf, western Algeria. Another 20 kilometres into the desert, a billboard welcomes us into the Sahrawi Arab Democratic Republic.

From a house surrounded by shell cases, a man in camouflage checks our passports without stamping them.

The Sahrawi Arab Democratic Republic (SADR) may be recognised by 82 countries but the United Nations still considers it a “territory under an unfinished process of decolonisation.”

Western Sahara was the victim of a decolonisation process interrupted in 1976, when Spain – its former colonial power since the late 19th century – left that barren, sparsely populated land in the hands of Morocco and Mauritania.

After a ceasefire agreement in 1991, most of the SADR territory, including the entire Atlantic coastline, has been under Morocco’s control. A small, largely uninhabited and economically useless desert portion, known as the “liberated territories”, remains under the rule of the Polisario Front, which is outlawed in Morocco-controlled Sahara but strongly backed by Algeria and recognised by the U.N. as the legitimate representative of the Sahrawi people.

However, almost all of the roughly 250,000 Sahrawi people live today in Algerian refugee camps in Tindouf, 1,465 kilometres southwest of Algiers.

The Polisario Front’s humble governmental buildings stand out amid a sea of mud houses and corrugated iron under the scorching sun of the Algerian desert. Fully dependent on foreign aid, none of the Sahrawi refugees expected their situation to last this long – 37 years and counting.

As a result, the Polisario Front has strong support among the desert residents, many of who are itching to break the ceasefire and take up arms to fight for long-awaited independence.

Despite hardships at the refugee camps in Algeria, the living standards are significantly higher there than in the so-called “Sahara liberated territories”; a geopolitical no-man’s land where Polisario’s is the one and only rule. Here there is hardly any water, no electricity, no telephones and no hospitals of any kind.

It is an inhospitable place inhabited only by nomads and, of course, by the soldiers of the Polisario Front.

At the headquarters of the Second Battalion in Bir-Lehlu, the administrative capital, 400 kilometres west of Tindouf, a soldier scans the horizon atop one of the few tiny trees in the area.

At the order of his commander, he jumps to the ground and immediately vanishes into a hole in the ground. A minute later he pops out of another one, 50 metres away.

“In case there’s an air strike by Moroccan forces, there’s nowhere to go but underground, like those black and orange lizards you may have seen all over the place,” jokes Sidi Mohamed Baaya, one of the battalion´s senior officials. He adds that “maintaining and expanding the network of underground galleries is among the highest priorities” of the military organisation.

Inside a barrack that looks more like a museum of the Polisario Front’s history, Sidi Baaya briefs IPS on the largest “infrastructure” ever built in the Western Sahara’s territories.

The “wall”, a French-designed structure erected in the 80s, is over 2,500 kilometres long, criss-crossing Western Sahara from north to south, an intricate network of fences, trenches and barbed wire cordoning off the most economically useful parts of the land.

“We train our men to sneak across the wall and attack the Moroccan forces from their rear,” the Polisario official explains. Until the ceasefire in 1991, night missions across the wall were commonplace during a war that started in 1975 and lasted 16 years.

Born in the refugee camps in Tindouf, 23-year old Mohamed Murad is a member of a motorised unit that controls the section along the Mauritanian border.

“Since the abduction of three aid workers – two Spaniards and one Italian – seven months ago, we are on constant patrol, seven days a week, 24 hours a day. We suspect that the terrorists will soon (attack) journalists and foreign aid workers,” explains the young conscript Murad, while he looks through his binoculars towards a plain and empty horizon.

The three aid workers were abducted in Tindouf by members of an alleged offshoot of Al-Qaeda in October 2011. The incident has put the Saharans’ main life support – foreign aid – at risk.

To avoid new attacks, the Polisario patrols the area in Japanese-made pickup trucks fitted with anti-aircraft guns, and mounted on the rear.

“The Polisario was the first to mount heavy artillery on these light vehicles, much earlier than Somalia or Libya,” recalls Salama Abdallahi from the driver´s seat.

Well over 60 years of age, Abdallahi joined the movement in 1974, a year before Spain’s withdrawal from the territory, and is now one of the many veterans who chose to stay.

Abdallahi was born in Bojador, a coastal town in the south of the Saharan territory under Moroccan control. Besides sharing his military experience with his younger fellow soldiers, he also gives them first hand testimony of the land his comrades’ parents left behind after the occupation.

At a hundred kilometres northeast of Bir Lehlu, one could come across images of men armed with bows hunting gazelle and antelope, or even fishing. These ancient rock carvings date back 5,000 years according to the few archaeologists who have ventured into this area.

In moments of respite from the frequent sandstorms, it is not difficult to spot nomadic settlements scattered across the vast desert.

Like the many camels dotting this barren landscape, Nuna Bumra Mohamed’s tent also seems to pop out in the middle of nowhere. She sits in the middle of the 30-square-metre room; her green melfa, a Saharan female garment, stands out amid pristine red carpets and blankets neatly piled up next to an old wooden wardrobe.

Were it not for the huge Sahrawi flag – green, white and black stripes with a red star and a crescent in the middle – presiding over the house, the scene could be a picture unchanged from a thousand years ago.

“We have heard about terrorists sneaking from Mali and Mauritania, but we feel safe under the protection of the Polisario,” Bumra explains after offering her visitors a bowl of fresh goat milk.

“Other than terrorist attacks, our greatest concern is still the lack of water,” she adds.

Nuna confirms that the only inhabitants of the region are Bedouins like herself, nomadic families that survive on their herds of goats and camels, living in the wild. Despite the evidently harsh living conditions, this proud Sahrawi swears she has never even considered moving to the refugee camps across the border.

“I wouldn´t be able to live in a foreign country. Besides, how could we possibly abandon the only part of our land under our control?”