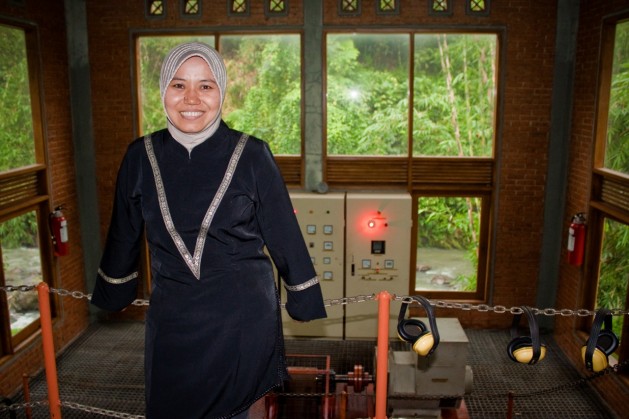 JAKARTA, Jun 28 2012 (IPS) - The nighttime glitter of Indonesia’s cities and urban centres contrasts sharply with darkness of the hinterland where some 90 million people live without the benefit of electricity.

With an electrification rate of 65 percent – about 35 percent of its 250 million people have no access to electricity – Indonesia lags behind its Southeast Asian neighbours. The rate is 84 percent in Thailand, 80 percent in the Philippines and 79 percent in Vietnam.

But, this serious gap in electrification is being seen as both a challenge and an opportunity in a country with commitments to reduce greenhouse gas emissions while pursuing an electrification target of 90 percent by 2020.

Indonesia has a range of renewable energy options – solar, geothermal, wind and micro hydroelectric plants (MHPs). However, policies to meet the demand have relied on coal and other heavily subsidised fossil fuels.

According to various studies, subsidies on fuel and electricity that now average 10 billion dollars annually are a serious impediment to meeting the country’s renewable energy targets.

The demand for energy has been such that in 2004 Indonesia turned from being a major producer of oil to net importer.

Of the renewable energy choices available, tapping the potential of the archipelago’s numerous rivers, using off-grid MHPs, looks most promising.

Indonesia’s rural communities have already demonstrated an ability to build and operate their own MHPs which, according to studies by the Indonesian Institute of Science (LIPI), can be set up at an affordable 3,000 dollars per kilowatt.

MHPs require little more than a pipeline or penstock conveying water to a small powerhouse where it turns a turbine to produce electricity before returning to the river along a tailrace channel.

Because MHPs require good care of upstream areas, communities have a stake in maintaining the ecosystem and the environment.

Indonesia’s MHP revolution started in 1990 when Sucipto (one name) created a turbine in his village of Gunung Sawur, East Java. With support from fellow villagers in finance and labour, his project produces 13,000 watts of electricity from the Besuk Semut river.

Sucipto’s success story soon spread to other areas. From 1992 to 2009, his power plant model was replicated all over East Java and in Lampung and Bengkulu on Sumatra island.

In Simpang village, West Java, with technical help from the Indigenous Nature Conservation Foundation (YPAL) and financial support from the Global Environment Facility of the United Nations, an MHP has been serving 200 households since 2003.

In 2005, LIPI built another successful MHP in Lebani village, South Sulawesi, generating 30 kilowatts to serve 100 families. This initiative then spread to other areas in the province, such as Bungin, Potolukin, Baraka and Palakka Maiwa.

But the best-known organisation driving the MHP revolution is IBEKA, a winner of the 2012 Ashden awards instituted by a British green energy charity.

“Off-grid hydro schemes are bringing the benefits of electricity – like good quality light, TV and power tools – for the first time to remote communities in Indonesia,” the Ashden citation said.

With 61 IBEKA hydro schemes installed so far, 54,000 people currently benefit from electricity supplies, while 7,400 tonnes of carbon dioxide are being saved annually. IBEKA’s Mumpuni is regarded as one of Indonesia’s most dynamic women.

Last year in Sukamulya village, Sukabumi district, IBEKA persuaded the Astra Honda Motor automotive company to construct a 6,400 watt MHP and in May another one came up in Semarang with financial support from Hivos.

Mumpuni admits that several of her MHPs are not working. “For example, in Padasuka, Cianjur, a private company acquired the upstream area and turned it into a golf course, reducing water flow and causing the turbine to stop working,” she tells IPS.

Mumpuni emphasises that an MHP must have a community institution to take care of it. “It means building community awareness and responsibility…that’s an important part.”

When Mumpuni started an MHP in her own hometown of Subang she took care to involve the Cinta Mekar’s village cooperative and, with IBEKA’s backing, it got a loan from the United Nations Economic and Socail Commission for Asia and the Pacific to cover investment.

“A number of MHPs have turned into corroded junk,” says Ridwan Soleh, a YPAL executive. “This happened mainly to those funded by the government.”

“Once the MHP is ready they just leave it to the community which may not be in a position to handle it. Government agents seem only to care about getting the project executed and don’t care what happens afterwards,” Ridwan told IPS.

Indonesia’s current power generation capacity is 24 gigawatts, two-thirds of which is concentrated in Java, Madura and Bali. With demand growing at nine percent annually, the cities are forced to put up with frequent blackouts.

With cities starved of power, the chances of rural areas getting power from the national grid are dim and MHPs hold out the best option for electrifying Indonesia’s far-flung areas.