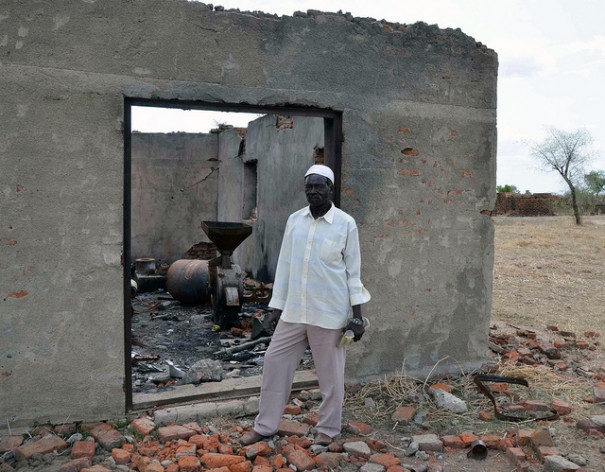 An eyewitness and village elder stands next to what appears to be a razed grinding mill in Um Bartumbu village. Credit: Photo by Ryan Boyette for Eyes and Ears Nuba.

WASHINGTON, Jul 20 2012 (IPS) - An NGO here unveiled new satellite evidence on Friday that would seem to suggest the torching of a village in southern Sudan by state soldiers.

The group, the Satellite Sentinel Project (SSP), suggests that the images, coupled with eyewitness testimony and video footage gathered by the organisation, are further proof of crimes against humanity by Khartoum regime.

“Burning civilians out of their homes is a crime against humanity,” Hollywood actor George Clooney, who co-founded SSP in 2010, said in a statement released Friday. “We’ve got irrefutable visual proof of a mass atrocity that happened last year in a village that’s not even on most maps.”

The village is Um Bartumbu, formerly home to around 250 families in South Kordofan, in the Nuba Mountains of southern Sudan. This is an area that has been viciously targeted by the Sudanese government over suspicions of siding with a rebel group, the Sudan People’s Liberation Movement (North) – the SPLM-N – an affiliate of the secessionist party that now heads the government of independent South Sudan.

According to Jonathan Hutson, with the Enough Project, an anti-genocide watchdog based here in Washington closely affiliated with SSP, the villagers of Um Bartumbu believe they were targeted because they all voted for the SPLM-N’s political party.

According to the story as now pieced together by SSP and local citizen journalists from a group called Eyes and Ears Nuba, in November 2011 a group of Sudanese forces appeared in Um Bartumbu calling themselves Kabita Kabreet, Sudanese Arabic for the Match Battalion.

Evidently, the name refers to the forceful burning of civilian structures in southern Sudan. In an undated cell-phone video obtained in mid-June by Eyes and Ears Nuba, a soldier is reportedly seen saying, “Matches, where are the matches? Burn this house.”

Hutson says that SSP analysts examining infrared satellite imagery found “burn patterns showing that this was a case of serial arson. In images from the beginning of November, you see healthy, unburned trees between apparently civilian infrastructure; but in images from January, 90 percent of those have been burned.”

Following the burning, the Match Battalion is said to have returned to Um Bartumbu sometime between late March and mid-June to loot the village’s mill generator and zinc roofing.

“The razing happened in November 2011, but internally displaced people from the state are still suffering today,” Hutson told IPS.

“They fled to the homes of nearby relatives, but everyone is starving because the government of Sudan has imposed a humanitarian blockade – barely any aid is getting through. Today, their choices are to stay and starve or flee on foot, but it’s at least a seven-day walk to the nearest refugee camp.”

Due to concerted violence and a devastating drought, recent months have seen hundreds of thousands of refugees cross over from southern Sudan into South Sudan and neighbouring countries.

Hutson continues: “It’s time for the international community to fulfil its responsibility to protect civilians who are being burned out of their homes and who face near-daily bombings by their own government.”

Um Bartumbu marks the sixth time that SSP, which describes itself as the world’s first early-warning system for human rights and human security, has documented atrocities along the southern Sudanese frontier. On Wednesday, the organisation released a report on its first 18 months of operation.

“The continuing bombing and starving of the residents of South Kordofan and Blue Nile state must be addressed more forcefully by the United Nations Security Council,” Enough Project and SSP co-founder John Prendergast said on Friday.

“It is not enough to press for a deal between Sudan and South Sudan. There also must be a process dealing with the conflict in Sudan that addresses the political grievances of the people of these regions as well as Darfur and the east.”

The new revelations from Um Bartumbu come just a week after the presidents of Sudan and South Sudan, Omar Al Bashir and Salva Kiir, engaged in direct talks for the first time since the two countries almost went to war over a disputed oil field in late April.

Although the impact of that meeting is yet to be seen, many observers are dismissing of the long-term implications.

“The meeting between the presidents was a meeting between two men facing the consequences of an economic meltdown, both heading for devastating hyperinflation,” longtime Sudan-watcher Eric Reeves, with Smith College, told IPS.

“Until Khartoum recognises that it needs to negotiate with the SPLM-N, I’m afraid we’ll see an ongoing flow of refugees. Instead, Khartoum is continuing its brutal war.”

Referring to the new SSP evidence, Reeves, who has advised the project in the past, continues: “That’s what the Match Brigade is all about. If you destroy villages, render arable fields unusable, the people of southern Sudan have nowhere to go. They’ve missed two planting season and will miss another this fall – they’re starving to death.”

While Reeves is scathing in his assessment of the reaction by international diplomats and governments to the decade-long crisis in Sudan – “slow, diffident, at times disingenuous” – he says that the new satellite imaging work is historic and will eventually prove crucial in bringing members of the Khartoum regime to justice.

“This marks the point where human rights investigations are no longer on the ground. Eventually, we’ll see some of the people involved in these crimes be brought to (the International Criminal Court in) the Hague, and SSP evidence will be used against them – for instance, we’ll be able to identify many of the officers of this Match Brigade,” Reeves says.

“Going forward, we have an extraordinarily important tool for real-time atrocity prevention. This type of work sends a clear warning to regimes that are contemplating military action: your actions will no longer take place in the dark.”