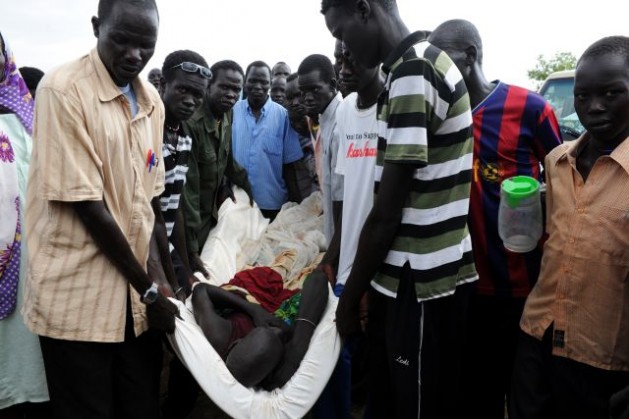 The U.N. evacuates wounded in the aftermath of bombings in South Sudan in April. Credit: UN Photo/Isaac Billy

WASHINGTON, Jul 16 2012 (IPS) - Ahead of an Aug. 2 deadline, the leaders of Sudan and South Sudan over the weekend engaged in their first direct talks since hostilities spiked in late April.

But on Monday, observers here in Washington warned that the framework for the talks remains too narrow, threatening to continue a decades-long trend of ineffectual agreements in Sudan that fail to address underlying issues of governance in Khartoum and marginalisation elsewhere.

“A deal is still possible, because the (Khartoum) government is cornered. This could affect the situation for a while, but it would be a stopgap measure,” Omer Ismail, an activist born in Darfur, said at a panel discussion in Washington on Monday.

On Saturday, little over a year after South Sudan achieved its independence, Presidents Omar Al Bashir and Salva Kiir met in Addis Ababa on the sidelines of a summit of the African Union Peace and Security Council, which both addressed earlier in the day.

While little is publicly known of the substance of the hour-long meeting, news reports suggested that the two presidents emerged smiling and shaking hands. In the eyes of many, this marked a significant turnaround since the two countries almost went to war over a disputed oil field in April.

South Sudan had already cut off critical oil production in January, a move that heavily impacted on revenue streams for both the new government in Juba and that in Khartoum.

The strained relationship has been further exacerbated by ongoing charges that South Sudan is aiding rebel groups in several areas in Sudan. The Khartoum government stands accused of having stepped up the shelling and bombing of civilians, violence that has resulted in hundreds of thousands of refugees flooding into South Sudan in recent months, overwhelming both the fragile new government and international humanitarian efforts.

Saturday’s meeting came the same day that an official African Union report characterised progress in the rapprochement between Sudan and South Sudan since April as “slow and uneven” and noted the “looming deadline” of Aug. 2, a deadline initially proposed by the African Union and subsequently adopted by the United Nations Security Council.

If the two sides are unable to come to agreement on a host of outstanding issues by that date, Security Council-backed sanctions are set to kick in on both countries. The Security Council has already noted its concern over the stuttering peace talks.

According to media reports from Addis Ababa on Saturday, President Kiir’s chief negotiator and general-secretary of the ruling Sudan People’s Liberation Movement (SPLM), Pagan Amum, said that the two presidents had “instructed their negotiating teams to expedite negotiations”.

Recent weeks have seen a rash of public protests in Sudan, ostensibly over economic difficulties – a situation that Omer Ismail says is the Khartoum government’s own making.

Although the appetite on the part of the international community – and certainly the United States – to directly assist in toppling President Bashir is currently very low, there is a general sense that Bashir is on his way out.

According to Francis Deng, a former Sudan diplomat and currently U.N. special advisor on the prevention of genocide, the failure to address grievances in the south has long been the underlying cause for changes of regime in Khartoum.

“If (the Bashir) regime had been wiser, now that the issue of the south has been dealt with, it would have done what it could to address the grievances of all the marginalised groups that are not in the south, because all these are interlinked,” Deng said at the panel discussion here on Monday.

Today, President Bashir’s weakened standing is almost certainly pushing him towards re-engagement with the south.

“There’s a hint of desperation in both quarters at this juncture that, coupled with the Security Council deadline, might actually yield some kind of temporary deal,” John Prendergast, a co-founder of the Enough Project, an anti-genocide advocacy group and sponsor of Monday’s panel discussion, said in Washington.

“But unless and until there is some mechanism or negotiations framework that addresses the internal issues in Sudan in a comprehensive way – something that jointly accommodates the aspirations of all of those groups that have been fighting against the Khartoum government – it will never be sustainable.”

Prendergast is excoriating in his assessment of the African Union negotiation team headed by former South African President Thabo Mbeki.

“Those tasked with the negotiations have not imagined the comprehensive approach that is necessary to actually resolve the conflict,” Prendergast says.

“They need to expand their effort and recognise that there are multiple issues of governance that need to be addressed. Otherwise, any agreement will be another example of people signing deals and then walking away.”

Prendergast says that this type of approach to the problems in Sudan – a “stovepipe” type of “talks only” mediation – have characterised the international community’s approach for the full 23 years of President Bashir’s rule.

Instead, the Enough Project suggests a dual set of negotiations, one on the cross-border problems between Sudan and South Sudan (as is already taking place) and another focused on issues within Sudan itself, where many suggest that a massive civil war is unfolding.

“If the Aug. 2 deadline comes and goes, let’s ensure the imposition of Security Council sanctions as promised,” he says. “If they miss that deadline, that’s a catalyst to try to create some kind of consequences for abuses.”