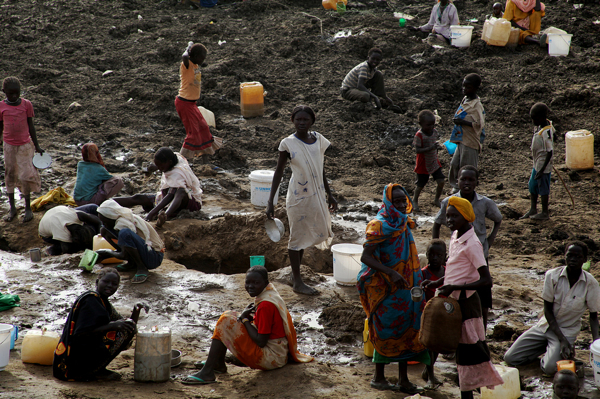 Dozens of women and children dig into the earth in a dried out watering hole in the Jamam refugee camp in South Sudan in order to extract water from waist-deep pits after water ran out. Credit: Jared Ferrie/IPS

WASHINGTON, Jun 19 2012 (IPS) - Within the next nine days, drinking water at refugee camps in South Sudan’s Upper Nile state will run dry, warned the aid agency Doctors Without Borders on Tuesday. Meanwhile, refugees continue to stream into the state, as the few camps set up to house to entrants are stretched even further beyond capacity.

According to the most recent update by the United Nations, tens of thousands of people are currently moving from Sudan’s Blue Nile state, fleeing violence and fighting in Sudan that aid workers call “horrific”. During the first week of June, an estimated 4,000 people per day reportedly crossed the border into Upper Nile.

Those numbers have massively overshot initial preparedness estimates by the international aid community. For instance, the U.N.’s refugee agency, UNHCR, originally planned for approximately only 75,000 people in the state of Upper Nile.

As of Tuesday, an estimated 110,000 people have crossed the border into Upper Nile alone, according to Doctors Without Borders, also known as Médecins Sans Frontières (MSF). That number includes some 35,000 in just the last three weeks and doesn’t account for the tens of thousands more in the neighbouring states of South Sudan and Ethiopia.

In Upper Nile, that number now includes 70,000 in three camps – one of which is still under construction – as well as another 40,000 that are still on foot. Of these, half are living temporarily in settlements along the road and planning to move to one of the camps.

“This is group is our biggest concern, as they have been travelling for weeks to months, living under extremely poor conditions,” Voitek Asztabski, MSF’s emergency coordinator in Juba, told journalists on Tuesday. “Mortality is above emergency thresholds. These people are exhausted and have gone through horrific insecurity in Blue Nile.”

MSF says that right now, the most critical and dire problem is the lack of water in a notoriously water-scarce region, a problem for those both in and outside the camps.

Even at the three camps, which were built in areas with known water reserves, available resources are quickly being drained. Asztabski says that aid workers are currently rationing 7.5 litres of water per day to refugees, but warns that supplies are set to run out in a little more than a week’s time.

“We have nine days to see these people relocated,” he said, calling for emergency hydrological exploration to help find water reserves.

Although the imminent start of the rainy season will ease the water situation somewhat, it will also complicate other pressing issues.

Washed-out roads will make it difficult to transport both refugees and critical supplies of food, medicines and even treated water. The U.N., meanwhile, has pointed out a lack of heavy equipment to deal with road closures.

Already, Asztabski said, “people have been eating tree bark and leaves.” Refugees in the camps are currently receiving food every four or five days, he reports, while aid workers have also been able to distribute plastic sheeting and blankets.

“The critical situation requires scaling up capacity of all involved actors on the ground in every aspect of support for the refugees,” he warned.

Clinics in the camps are seeing around 200 to 300 people per day, according to Erna Rijnierse, a medical doctor who spoke on Tuesday by satellite phone from the Maban camp in Upper Nile.

Most of these people are suffering from diarrhea given the lack of basic sanitation, a health issue that compounds the already urgent problem of dehydration. And as the rainy season starts, Rijnierse warned that doctors will see new cases of respiratory diseases as well.

The clinics are treating 20 to 30 new children every day, particularly for complications due to malnutrition. Rijnierse reported that official malnutrition levels are at emergency thresholds, but quickly added that the actual numbers are almost certainly higher.

According to UNHCR, some 200,000 refugees have fled Sudan since June 2011, heading to South Sudan as well as Ethiopia.

The recent influx stems from a new round of fighting between the Sudanese military and rebels in May, violence that has included an ongoing campaign of bombing civilians. This violence has been coupled with a severe food shortage afflicting much of the region.

Fleeing refugees report widespread violence in Blue Nile and South Kordofan, also in Sudan, including “fighting, burning of villages and houses, contamination of water points”, Adrian Edwards, a UNHCR spokesperson, said on Tuesday. He noted that the U.N. has not been able to verify the situation because it does not have access.

UNHCR is “very concerned” about the population that remains in the areas of Sudan experiencing violence, Edwards said. “We’re currently requesting access to those populations, but at the moment this is not forthcoming.”

On Monday, Jenn Christian with the Enough Project, a Washington-based anti-genocide advocacy group, called on the international community to impose sanctions on the Sudanese government.

“A concerted diplomatic effort must also be initiated to pressure Sudan to negotiate a ceasefire” with the rebels, she wrote. “Such negotiations are critical in terms of stemming further human suffering within Sudan and are also necessary to the further progression of Sudan-South Sudan talks.”

Over the past weekend, UNHCR was finally able to begin an emergency airlift of supplies, having recently gained access to an airstrip 90 to 150 kilometres from the three Upper Nile refugee camps.

This airlift was the first of its kind since December. Supplies included equipment to drill new wells for drinking water. Additional supply routes have also been created through Ethiopia and up the Nile River.