LIMA, Jul 6 2012 (IPS) - In under two days, five demonstrators were gunned down by security forces in the northern Peruvian highlands region of Cajamarca, where a state of emergency has been declared. 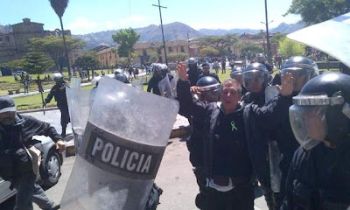 That makes a total of 15 dead and 430 injured in social protest-related incidents in less than a year since President Ollanta Humala took office.

Health authorities of the department (province) of Cajamarca told IPS that 27 members of local communities and four policemen were wounded in clashes on Tuesday in the district of Celendín, and another 13 civilians were injured on Wednesday in Bambamarca.

For the second time in six months, the government called a state of emergency in the area, where local and peasant communities are mobilising to protest against the Conga gold mining project headed by the multinational corporation Yanacocha-Newmont.

These demands are not new. Protests staged in December 2011 led to a change of ministry authorities and prompted an international environmental impact assessment in Conga, which did not satisfy project opponents.

“Almost all the civilians hurt in these clashes had bullet wounds, while the policemen had only concussions and minor injuries,” Cajamarca regional health director Reinaldo Núñez Campos told IPS, after confirming the death of the fifth victim, 29-year-old José Antonio Sánchez, at 6:45 a.m. Thursday.

Sánchez had been wounded while he participated in a demonstration broken up by police and army officers. The demonstration had been called to protest the Conga project and express discontent with the administration of Mauro Arteaga, the mayor of Celendín, a district some three hours away by car from the provincial capital of Cajamarca.

At the time this story was published, President Humala had not yet commented on these incidents. Only Prime Minister Óscar Valdés mentioned the matter briefly in a press conference at government headquarters, on Wednesday, while justice minister Juan Jiménez urged regional social leaders to “keep calm”.

Roque Benavides, CEO of the mining company Buenaventura, a Yanacocha shareholder, said that despite protests they would go ahead with the construction of the water reservoirs required by the government.

"We're facing a very serious problem, an excessive use of force, inadequate police training, and no strategy to prevent conflicts," Rolando Luque, assistant secretary for social conflict prevention at the office of the ombudsperson, told IPS.

Luque informed that from January 2006 to date 211 people have been killed and 2,700 injured in social protest-related incidents.

"Our work at the office of the ombudsperson is becoming increasingly difficult, because our repeated recommendations keep falling on deaf ears," he said.

He assured that there will be an investigation into how the arrests were conducted. The state of emergency cannot be used as "carte blanche for the police and army to do whatever they want," he said.

More than 20 people had been arrested as of Wednesday, according to the ombudsperson’s office, including environmental leader Marco Arana, who was beaten and dragged by police to the Cajamarca city police station.

A video broadcast on local TV by Channel 45 shows Arana being picked up by police in the city’s Plaza de Armas square, while sitting on a park bench. A few minutes later, Arana posted on his Twitter account that he had been beaten. His attorney, Mirtha Vásquez, described what happened to IPS.

“They took him to a room in the police station where some three policemen came down on him with their sticks, hitting him for 20 minutes, and yelling, ‘This is what you get for terruco (terrorist).’ He was then taken to another office. I know this because he told me, but also because I saw the bruises on his face,” Vásquez said.

Arana, a former Catholic priest who founded the Land and Freedom Movement, was released early on Thursday, along with eight young people who had also been arrested for protesting.

“Violence will only end when police brutality stops and Conga mining works are suspended, along with any other citizen practices that can generate further violence,” the environmental activist said in a press conference, after spending 12 hours behind bars.

“The government is mistaken if it thinks it is going to quash the just demands of Cajamarca with bullets, torture or beatings. We want Yanacocha out,” he added.

Arana’s lawyer will file a complaint against the policemen and a report with the Organisation of American States’ Inter-American Commission on Human Rights (IACHR). In 2007 the IACHR had granted precautionary measures in favour of Arana and Vásquez, in response to a report of intimidation and threats made against them, and asked the Peruvian state to adopt the necessary measures to protect them.

While the population of Cajamarca is increasingly divided and opposition leaders seek ways to get around the state of emergency, the nearby community of Celendín is terrified, fearing further repression, and the media is viewed with growing distrust.

“I try not to give any statements because the media in Lima keeps twisting the facts. I can’t have the people against me,” Elí Guerrero, president of the Federation of Celendín Journalists, told IPS.

IPS also spoke with several residents who oppose the mining project in this district, and all of them asked to remain anonymous.

According to media accounts demonstrators had caused damages and even burnt down part of the facilities of the Celendín municipality, accusing mayor Arteaga of being a “traitor.”

The violent incident apparently erupted as a result of claims made by Arteaga against opponents of the project.

“They’re a handful of extremists who think they can use force to make the government and civil society agree with them… I don’t think it’s right to force your ideas on anyone at gunpoint,” Arteaga had said on Jun. 28 on the TV programme La Hora N.

By Tuesday, opponents were calling to step up protests, and demonstrators marched into the municipality, causing material damages. “There were few policemen at the scene and as things got out of hand the army, who had been standing by, stepped in,” a resident said.

Arteaga refused to comment on this incident. “We don’t want to add fuel to the fire.” “Just look at the reaction a minor interview on TV gets,” Celendín municipality PR chief Richard Díaz, who was in the building during the incidents, told IPS.