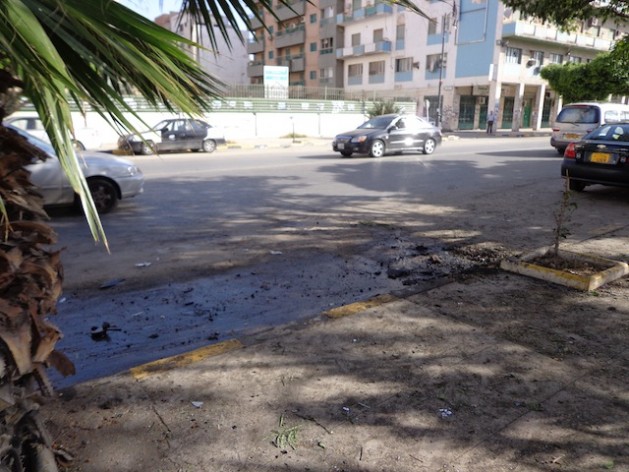 The scene of a bombing outside a hotel in Tripoli. Credit: Mel Frykberg/IPS.

IPS spoke with armed Gaddafi loyalists who vowed they will step up their fight. Government sources alternately claim the perpetrators are former President Muammar Gaddafi loyalists or Islamists bent on revenge.

This murky situation is further exacerbated by a clamp down on the dissemination of information in the local media, and Libyan security forces preventing foreign journalists from covering the scenes of attacks first-hand or taking pictures.

For the second Saturday in a row this reporter was woken by a car bomb exploding outside my hotel in downtown Tripoli, the second of its kind since Gaddafi’s death in October 2011.

A security vehicle belonging to members of the Libyan military staying at the Four Seasons hotel in Omar Al Mukhtar street was the target. The previous Saturday morning another car bomb went off outside the headquaters of Tripoli’s military police just down the road. One person was injured in the latter attack.

“We believe former supporters of Gaddafi are behind this attack and the attack last Saturday,” said a member of the security forces sitting in one of several security vehicles which rushed to the scene to cordon off the street.

“These Tahloob (Arabic for Gaddafi loyalists) are talking big, saying they will carry out a counter-revolution against the February 17 movement (when Libya’s revolution against Gaddafi began). They will only be able to carry out small acts of sabotage, nothing major,” one of the security men told IPS.

Last week a number of Tahloob were killed when Libyan security forces raided a farm where loyalists were hiding out after they were said to have coordinated the car bombing outside the headquarters of Tripoli’s military police.

One of the members who survived was alleged to have set up sleeper cells in Libya and to have been criss-crossing Libya’s border with Tunisia from where he and several comrades were allegedly smuggling weapons into Libya to “destabilise the country post-Gaddafi”.

Libyan intelligence also allege the group were in possession of another seven bombs, one of them intended for another Tripoli hotel. Documents linking them with one of Gaddafi’s sons, Saadi, who is under house arrest in Niger, were also said to have been found on the survivor.  Saadi warned earlier in the year that he was in contact with sleeper cells who were organising underground resistance.

IPS managed to get an exclusive interview with Gaddafi loyalists in the Abu Salim neighbourhood of Tripoli, one of the last bastions of Gaddafi supporters and scene of some of the fiercest fighting between loyalists and rebels during the revolution.

Shortly before Gaddafi was killed, Abu Salim was flooded with weapons in a last ditch attempt at resistance against the revolution.

“We are waiting for the right moment. We will not give up. If they (the new government) think we are a spent force they are mistaken,” Ahmed, who fought with Gaddafi’s forces and managed to escape from a rebel detention camp last year, told IPS.

Ahmed claims to have killed a number of rebels, and is now in hiding. He and the others interviewed would not consent to their last names being published nor their pictures being taken for obvious security reasons.

“Every man in this neighbourhood is armed but our guns are buried underground because the area is raided regularly by the security forces searching for weapons and wanted men,” Muntasser, another loyalist told IPS.

Meanwhile, during the last three weeks over two dozen high-ranking military or government officials have been assassinated in Benghazi. Many of the men were former Gaddafi loyalists who defected to the rebels after formerly serving in Gaddafi’s regime.

Some claim Islamist insurgents are behind the attacks, as Libyan weapons flood conflicts in neighbouring countries including the Sinai, Mali, Nigeria, and Syria where dozens of fighters have joined up with the Free Syrian Army.

In another incident, on Friday eight prisoners managed to escape Al Fornaj prison in Tripoli after a coordinated attack. Gunmen in pickup trucks outside the prison shot at security guards while prisoners inside set sections of the prison on fire and managed to overpower a number of guards within the prison. This was the third attack on the prison since the revolution, and it took the authorities many hours to re-establish control.

During the last few weeks, security buildings and hotels in Benghazi have been rocked by bomb attacks and attempted attacks. Foreign diplomatic staff and embassies have also been attacked or been the targets of attempted attacks. U.S. embassy staff in Tripoli escaped an attempted carjacking last week.

A grenade and rocket attack on the Misrata offices of the International Red Cross last week forced the evacuation of several ICRC buildings, and the organisation to temporarily suspend its work.

Kidnapping and abductions too continue, with the whereabouts of a delegation from the Iranian Red Crescent kidnapped in Benghazi several weeks ago still unknown. Minor street disputes regularly erupt into gun battles. On Thursday an AK47-wielding thug threatened to put a bullet in my head after I witnessed one out of control gunfight.