Shifting to Renewables in Japan – An Uphill Task 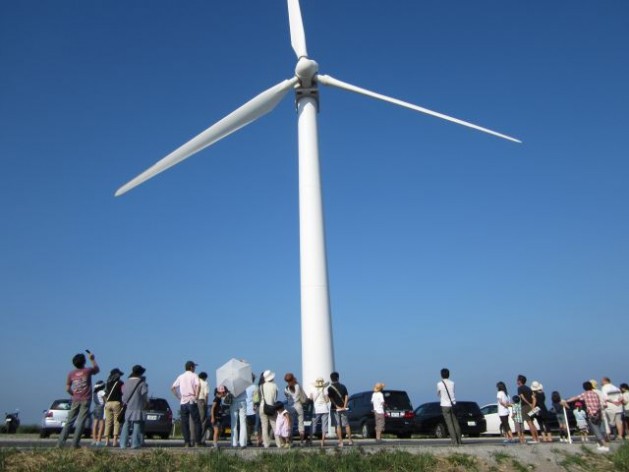 Community learning events are offered to raise awareness of the importance of the windmills built by the East Izu local government. Credit: Courtesy of East Izu government.

TOKYO, Aug 28 2012 (IPS) - Renewable energy is emerging as the “clinch deal” in Japan`s painful power crisis that pits the government and business against public demand for zero nuclear power. But experts say the going is easier said than done.

“Renewable energy is now seen as the way forward for a decision that is heavily political. But issues remain contentious,” said energy expert Professor Takao Kashiwage, the advisory head of the government`s New Energy Subcommittee.

Kashiwage points out that renewable energy sources – mainly solar, wind, small hydro and geothermal from hot springs – while seen as a solution are still fraught with uncertainties given their dependence on the vagaries of the weather or public support.

“For a leading economy such as Japan`s, I would support keeping nuclear power as a firm option even though we must work to lessen that percentage,” he told IPS.

He explained that research has shown windmills located on Japanese seashores produce power that drops during the summer when winds are usually not strong. And in winter, when daylight hours shrink, solar generated energy is less abundant.

Even geothermal, touted as a vital energy investment in Japan given the country’s abundant hot springs, is facing a battle with local resorts – the Kusatsu Hot Spring Resort association, on Kyushu island, announced opposition to developing the clean energy for fear that the precious mineral hot springs would decrease in supply.

Japan is set to unveil a new energy policy this month that aims to reduce the country`s dependence on nuclear power drastically by 2030. Nuclear power officially supplies 30 percent of national needs, a figure that has changed given the temporary halt of 52 of Japan`s 54 nuclear reactors.

The devastating Fukushima nuclear accident in March 2011 has forced Japan to phase out nuclear power. High radiation spewed from the damaged reactors contaminated large swaths of farmland, the ocean and cities and forced tens of thousands of people out of that area in the northeast of the country.

The bitter test now for Japan is to ensure a stable supply of electricity from alternative energy sources to match the nuclear power output that provided over a trillion megawatts per hour.

Anti-nuclear advocates say they are determined to keep the pressure on the government, to force a pledge for zero nuclear power in the upcoming energy policy.

The cabinet sees energy policy as a choice between two scenarios. On one hand, zero nuclear power, which would boost renewable energy dramatically to 35 percent as well as increase the use of fossil fuels. The other is maintaining nuclear power, but at a reduced rate: less than 20 percent.

The first option is rejected by nuclear proponents, who warn that higher electricity charges as Japan imports fossil fuels and invests more on new electricity grids would lead to business decline and security risks in the next few years.

The Japan Association of Corporate Executives released a statement this month warning that it was against the national interest to abandon the peaceful use of nuclear power and scrap-related technologies.

Indeed, electricity charges this month have risen, albeit slightly (less than 10 percent per kilowatt per hour). This is nevertheless expected to dampen business growth significantly and increase unemployment, while pushing companies to move abroad.

But politicians are reluctant to announce a solution, fearful of a backlash from the electorate. A government opinion poll released this week showed nearly 50 percent of respondents want Japan to abolish nuclear power by 2030, and also indicated that the more informed people are with regard to energy issues, the greater their support for reducing nuclear reliance.

Sumio Saito, an energy consultant with Wind Connect Japan, a new company that promotes alternative energy, says there is no turning back to nuclear energy, even though Japan will consume more fossil fuels in the short term.

“Fossil fuels are needed in this transition period as Japan moves away from nuclear power. This could be viewed as a ‘grace period’ in the short term despite the increase in greenhouse gas emissions as a result,” he said.

An illustration of the growing commitment to change are the efforts of the local government in East Izu, a hot spring resort located on the coastline of Shizuoka prefecture, 200 kilometres west of Tokyo.

Three windmills supply one-third of the town`s 6,300 households with energy that is first sold to the Tokyo Electric Power Company.

Takumi Umehara of the local government explained to IPS the income from wind power sales is used to subsidise solar panels for households. The way forward, he said, is to raise awareness among the community of the need to support renewables.

“We have discovered that the only way to combat local opposition to renewables, from noisy or upset hot spring owners, for instance, is community understanding. A major part of this process is providing studies and research that show them the benefits of renewables,” said Umehara.

Izu is a picturesque sea and mountain resort that is prone to earthquakes. “Our natural vulnerability gives us all the more reason to develop safe energy,” he pointed out.