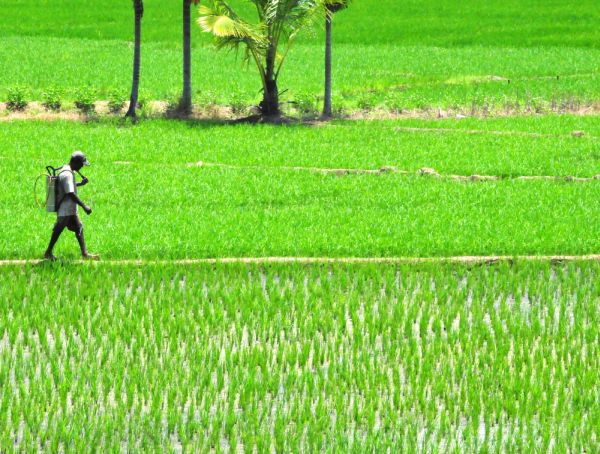 New research on the high prevalence of kidney disease in Sri Lanka's farming areas mentions a possible link to heavy metals in the water, associated with fertiliser and pesticide use. Credit: Amantha Perera/IPS

COLOMBO, Aug 21 2012 (IPS) - A new report links the high prevalence of chronic kidney disease in Sri Lanka’s main agricultural production regions with the presence of heavy metals in the water, caused by fertiliser and pesticide use.

Over the past two decades, dozens of studies have been conducted on the large number of kidney patients in Sri Lanka’s agro-rich north-central region. However, none had conclusively identified a clear cause.

But on Aug. 14, a group of Sri Lankan doctors released a report that they said was compiled as part of an ongoing joint research project by the Sri Lankan government and the World Health Organisation (WHO).

The report states that: “Exposure to a combination of factors that are toxic to the kidneys (rather than one single factor) seems to cause this kidney disease. Toxic factors identified up to now include nephrotoxic agrochemicals, arsenic and cadmium.”

As many as 400,000 people in the north-central region may be suffering from kidney disease, said doctors taking part in the release of the report. They added that in the past two decades, as many as 22,000 people may have died as a result.

“The reason for the spread is heavy metals in the water caused by the unregulated use of fertiliser and pesticides,” Dr. Channa Jayasumana, from the Faculty of Medicine at the Rajarata University in Anuradhapura, told IPS.

Jayasumana was on the team of doctors who released the report. They said they had handed the study over to the government last year, and accused the authorities of failing to release it to the public, and of failing to take action on the results.

The report created a media stir in the country, but so far neither the government nor the WHO country office have acknowledged or denied its contents.

WHO sources confirmed to IPS that a researcher cited in the report, Dr. Shanthi Mendis, works for the international organisation. But they said some of the details reported in the media differed from those in WHO reports. They declined to go public, and said the research was still inconclusive.

Sources closely associated with WHO research said the organisation has in fact made a recommendation to the Sri Lankan government to regulate and standardise fertiliser and pesticide imports – the doctors’ main demand.

However, another report, published just one day after the study’s release, dismissed heavy metals as the main cause.

The report, “Environmental Contamination and Its Association with Chronic Kidney Disease of Unknown Etiology in North Central Region of Sri Lanka”, released by the New Delhi-based Centre for Science and Environment (CSE), identifies poor water quality as the main reason for kidney failure in that region.

The report says: “Heavy metals in drinking water are not related to chronic kidney disease in Sri Lanka. If heavy metal is responsible, then there is a different source for it than drinking water, and that should be explored.”

CSE deputy director Chandra Bushan told IPS “The problem is with the quality of the groundwater. It is contaminated due to geological and environmental reasons.”

But, he said, if fertilisers and pesticides were the main cause, then the disease should also be visible in other agricultural areas of the country with equally heavy use.

The CSE report also found that dug wells and tube wells were much more dangerous than natural springs.

The report stated that “The affected area covers approximately 17,000 square km, with a population of about 2.5 million, in which more than 95 percent live in rural areas.”

Citing the main hospital in the North Central Anuradhapura District, the report said that in 2010 there was “a 227 percent increase in live discharge patients with end-stage chronic kidney disease, whereas the death rate increased by 354 percent during the last few years.”

According to the numbers cited by the CSE report, which was released in Anuradhapura, more than 10 percent of the island’s population of nearly 21 million lives in these high-risk areas.

The regions most in danger are the north-central, eastern, southeastern and central, as well as parts of the northern provinces – Sri Lanka’s main agricultural production areas.

Despite the different conclusions reached by the two reports, researchers involved in each study acknowledged that the issues raised by the other were significant.

“We have always said that fertiliser and pesticide use should be regulated,” CSE’s Bushan said.

“There is no question that the water quality is bad, we agree with that,” said Jayasumana, whose research was cited in the CSE report as well.

Both studies also called for immediate action to stem the spread of kidney disease.

The statistics show that male farmers, who spend much of their time outdoors in the fields, are struck down most often.

The CSE report says it is male farmers between the ages of 30 and 60 who are at highest risk.

And the Sri Lankan research shows that at least 15 percent of men between the ages of 15 and 70 were affected in the north-central and southeastern provinces. “Men over the age of 40 years, who have been engaged in farming for more than 10 years, are at higher risk of developing this disease,” it states.

But despite the clear danger for men in the high-risk age bracket, especially those engaged in agriculture, options are few and far between.

“What to do? We have to use fertiliser and pesticide if we want to get a good harvest, we have to drink the water if we don’t want to die of thirst. No one has told us what to do and what not to do,” said Karunarathne Gamage, who lives in the country’s North Central province.

Bushan said the CSE study also emphasised the poor quality of medical services available in the region. One session of dialysis costs the Sri Lankan government around 90 dollars, and most regional hospitals lack staff and facilities to carry out such procedures regularly.