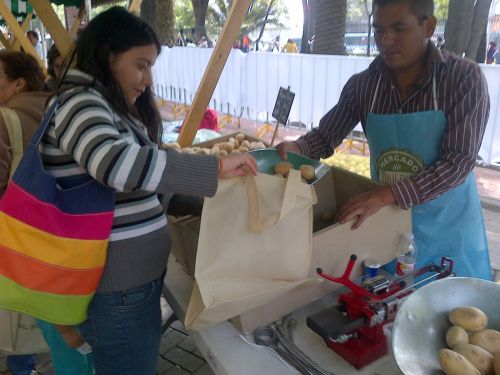 Farmers like Jorge Godoy sell their vegetables and fruit in the square in the Bosque de Chapultepec, a park in Mexico City. Credit: Emilio Godoy/IPS

MEXICO CITY, Aug 7 2012 (IPS) - Isabel Becerril has come with some friends to the “barter market” in the Mexican capital, to exchange 40 kgs of recyclable refuse for fresh produce, sweets and plants. “This is the first time I have come here, and I like it,” the university student tells IPS, with her ecological bag in hand.

“This encourages people to separate their trash,” says Becerril, 20, a student of graphic design at the Autonomous Metropolitan University.

Since March, the Mercado del Trueque – barter market – has operated the first Sunday of each month in the Bosque de Chapultepec, a forested park that is described as “the lungs of the city”, to the west of the capital.

The market is a novel idea forged by groups of local vegetable and plant vendors and the Mexico City secretariat of the environment (SMA).

The barter mechanism is simple. In a large white tent, SMA employees and volunteers at 20 tables receive cardboard, paper, glass, aluminium, plastic bottles, electronic devices and other waste from consumers, weigh the materials, and give the customers slips of paper which they hand over at kiosks for plastic vouchers representing the points they earned.

Using these vouchers, they can buy tomatoes, potatoes, lettuce, lemons and other produce from farmers from districts surrounding Mexico City. The amounts depend on the points gained.

For example, one kg of plastic bottles is equivalent to 24 points, a kg of aluminium is worth 16, and a kg of cardboard or glass, three points each.

And at the vegetable stands, 20 points can buy half a kilo of tomatoes or potatoes.

The project “has been a success for the farmers,” says Erick Izquierdo of the Tierra Nueva Cooperative, founded in 2011 to advise small farmers on agroecological practices.

“The idea is for people to meet peasant farmers, see what they grow, and value their work,” he told IPS.

In Xochimilco, one of the 16 administrative divisions of the capital, Izquierdo raises rabbits and quail, and grows plums, avocados and lettuce.

Recycling is still in its infancy in Mexico. Of the more than 40 million tons of garbage generated every year in this country of 112 million people, only 15 percent is recycled. And in Mexico City, which produces 13,000 tons of solid waste a day, the rate is just 12 percent.

Farmers participating in the barter market have gained a new place to sell their produce and earn an extra income, which is paid by the SMA.

The recycling industry also benefits, because the materials collected are trucked to a company that processes and prepares them for industrial uses.

The Mexico City Federal District law on solid waste, passed in 2003, makes the separation of organic and inorganic waste obligatory, for their management and recycling.

The initiative was an instant success. More than 20,000 people have visited the market, exchanging over 70 tons of waste materials for 41 tons of fruit, vegetables, dairy products and plants, according to the SMA.

Jorge Godoy, who has been selling his produce at the market since it opened, sold his entire stock of pigweed, lettuce, potatoes and parsley – over 100 kgs – on Sunday Aug. 5.

“Sales were good today; this income is a big help,” the 27-year-old farmer, who works a one-hectare plot of land outside of the town of San Gregorio Atlapulco, in Xochimilco, told IPS.

Preparations begin the day before, as the goods are trucked to the market. At 6:00 AM on the first Sunday of each month, the farmers begin to set up their stands in the 686-hectare Bosque de Chapultepec, the largest city park in Latin America, whose name means “hill of the crickets” in the Nahuatl tongue.

The market opens at 8:00 AM and continues to do business until all the produce is sold.

Since the very first edition, long lines of people have formed in the barter market, waiting to swap their recyclable waste for fresh produce. Work goes on at a frenzied pace, at both the recycling tables and the vegetable stands.

At the entrance, visitors are greeted by a large sign that says “Don’t throw away what still has value; swap it instead”.

In the areas where the separated recyclable trash is placed, another group of people fill up the trucks that take the materials to the processing plant, where they will once again be transformed into useable elements.

Lourdes García got up early to bring in her load of glass and plastic. “This is the first time I have come. I heard of the market when it opened, and I started to collect my trash, and now I decided to come,” the 60-year-old retired nurse told IPS.

She said she was going to use her points to buy ornamental plants.

But the project is now facing a challenge: how to expand its operations. “We’ve reached our limit; the next step would be to make it a ‘travelling’ market, or replicate it in other areas,” Izquierdo says.

There are more than 20 “travelling” organic produce markets in Mexico, which are becoming more and more common.

The participating farmers and the SMA are negotiating to create the Tarjeta Proverde, a “green” card that would entitle them to discounts on purchases of farm machinery or parts.

Another alternative is based on the possibility that the city government may certify organic producers for using environmentally-friendly techniques.

Becerril wants to return to the market. “It’s a good idea, because it generates benefits for both consumers and producers,” the graphic design student says.