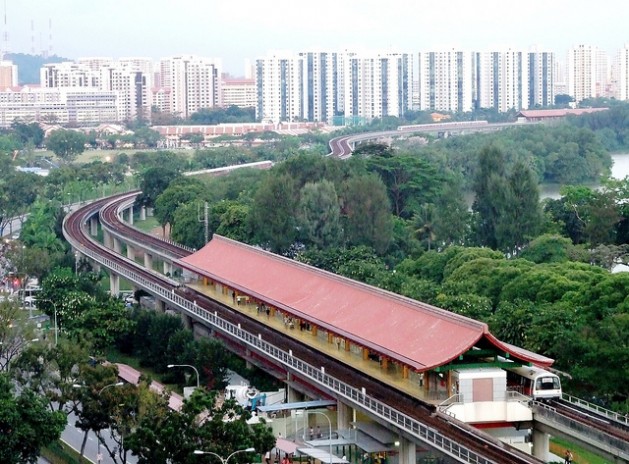 The network of light railways known as the MRT and highrise living are the hallmarks of modern Singapore. Credit: Kalinga Seneviratne

SINGAPORE, Aug 23 2012 (IPS) - Singapore was recently ranked as the world’s richest country. But there is much scepticism about such rankings among average citizens here.

According to the Wealth Report 2012 produced by real estate firm Knight Frank and Citi Private Bank, this tiny Southeast Asian island republic with a per capita income of 56,532 dollars is now the richest country in the world. And in 2010, it was placed third in world wealthiest rankings by the IMF and fourth by the World Bank.

“I feel life remains the same as it has been for the past five to 10 years” George Fu, a corporate communications manager in his late twenties told IPS when asked about his country’s new status as the world’s richest country.

“Despite being rich, common issues still linger on,” he says, adding, “flats are expensive, cars are expensive and education is expensive (for the average citizen).”

Manu Bhaskaran, co-author of a recent policy paper on a new social compact for Singapore published by the government-funded think tank Institute of Policy Studies, argues that a country can be rich and still have high income inequality.

“Also the growth of the past few years has been driven substantially by extremely large inflows of foreign workers, which have probably helped to keep wages at the lower income levels in check.”

While the Wealth Report estimates Singapore’s per capita income as 56,532 dollars, most foreign workers are paid less than 1,000 dollars a month. The policy paper on a new social impact notes that there has been wage stagnation for the bulk of the workforce here, while the income of the top one to two percent has risen sharply.

“(This) makes inequality today more jarring and potentially more damaging to our social and political cohesion than before,” the report warns.

“A growth model overly focused on achieving high GDP growth fuelled by a huge increase in foreign workers meant that the average citizen has not benefited as much from GDP growth as they desired,” Bhaskaran argues.

According to the Wealth Report, Singapore will see a 67 percent increase in centa-millionaires over the next four years – an uber-wealthy class of people with over 100 million dollars in disposable income. The Boston Consulting Group’s 2012 global wealth report, released in June, said that Singapore had the highest percentage of millionaire households in the world.

In 2011, Singapore was also ranked for the first time as the world’s best country for international meetings, by the Union of International Associations. The country generated over 450 million dollars in tourist receipts last year.

An island of just over four million people, Singapore attracted more than 10 million visitors last year, most from across Asia coming here to enjoy many new entertainment attractions developed over the past decade, as well as for high-end shopping.

With its high density of brand-name boutiques such as Louis Vuitton, upmarket nightclubs and entertainment centres, and luxury hotels such as Marina Bay Sands, Singapore is growing in importance for the world’s high-net-worth individuals.

There is a widespread perception, especially among bloggers and in Internet forum discussions, that Singapore’s wealth ranking based on per capita GDP is not an accurate indication of the population’s wealth, because a lot of this income is concentrated at the top levels and most of it is derived from economic activities off-shore.

One taxi driver who only gave his name as Alwin told IPS “this is a pay and pay country, we have to pay for everything, government gives nothing.” He was referring to the governing PAP (Peoples Action Party) founded by the country’s legendary former prime minister Lee Kuan Yew.

Another taxi driver blogging on the anti-government website ‘The Temasek Times’ argued that the average Singaporean does not earn anywhere near the levels of the average citizen of Norway or Switzerland – two countries ranked just below Singapore in the Wealth Report.

Writing under the name of ‘Displaced Sinki’, he said that despite having an overseas degree and 20 years experience at the executive levels of the professional scale, after the age of 50 he has become “structurally unemployed” and is left to drive taxis, earning less than 20,000 dollars a year.

“Being jobless at an older age is a tormenting experience and one cannot expect any handouts or assistance from our illustrious PAP government during such difficult times because like all things here, everyone has to simply fend for themselves in this unforgiving nation,” he complained.

Corporate communications manager Fu says that everyday he walks to work through Chinatown, one of the poorest areas in this city state, where he sees homeless and helpless senior citizens lying on the streets unattended.

But he sees this ranking as useful to market Singapore as an investment haven. “I do see this survey attracting more millionaires or billionaires from China or other wealthy nations coming and settling down here, and investments and business ventures streaming here to tap the rich segment of the population,” he says.

“It’s the people who make the country, not the government,” argues 72-year-old neighbourhood shopkeeper Venkat, who migrated here from India at the age of eight. He has three sons, all university graduates and earning salaries.

“In India if your son works, parents will expect to be supported and stay at home,” he told IPS. “Here you will see old people cleaning, cooking and selling food in hawker centres (food markets). They earn their living and don’t bother the children. That’s the work ethic which makes Singapore rich.”