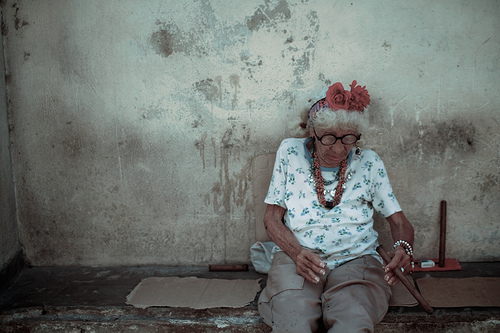 Like the rest of Latin America, Cuba is dealing with the aging of the population. Credit: George Schon/CC BY 2.0

HAVANA, Sep 14 2012 (IPS) - “We age much more quickly than we learn how to,” says Juan Carlos Alfonso, director of the Population and Housing Census that begins to be carried out on Saturday, Sept. 15 in Cuba. The question of aging is on many minds in this country, where important social progress has been made but acute economic problems persist.

The census, which will be conducted until Sept. 24, will provide information such as how many older adults live alone and in precarious housing situations, without adequate access to basic services such as potable water and with scarce financial resources for meeting their needs.

Alfonso, who is also the director of the Population and Development Centre (CEPDE) of the National Office of Statistics and Information (ONEI), told IPS: “In the past, there were many grandchildren to take care of our grandparents, and now there are more grandparents than grandchildren.”

That demographic tendency and a steadily decreasing fertility rate are having a direct impact on the country’s economically active population and on a growing number of dependants who are older adults.

The phenomenon of the aging of the population was acknowledged as a priority for social and economic policy in Cuba during the ruling Communist Party’s April 2011 congress, and experts say it is an issue that needs to be taken into account as part of the government’s current “updating” of the economic system.

ONEI sources say that in 2010, the 60-and-over population accounted for 17.8 percent of the island’s 11.2 million inhabitants. It is estimated that between 2011 and 2025, that age group will account for 26 percent of the total, and the average age will rise from 38 to 44 years, with high absolute growth in the number of people who are over the age of 80.

While the number of 60-and-over workers is growing twice as fast as that of the overall workforce, the economically active population will steadily shrink as of 2018.

Cuba has two million people who are 60 and over, and by 2030 that number will be 3.3 million, according to ONEI.

In response to this situation, in 2008 Cuba raised the retirement age from 55 to 60 for women and from 60 to 65 for men. While the issue is not on the table so far, the retirement age could be raised again, as has been the case in some European countries that are facing a similar problem with an aging population.

Beyond the question of the workforce, Cuba faces challenges involving an economic response that can ensure quality of life in old age, with the creation of adequate services and systems for providing attention and care to the elderly, especially the poor.

“I quit my job three years ago to take care of my dad, who is very sick. It has been a real ordeal to find disposable diapers, a special mattress to prevent bed sores, skin medication and whatever else can make his and our lives a little easier,” said Niuris García, a 51-year-old Havana resident.

García told IPS that in recent years the government has made efforts to ensure that diapers are available for needy older adults, but the supply has been neither sufficient nor regular. In general, disposable diapers for adults are available only in hard-currency (CUC) stores, at prices beyond the reach of most of those who need them.

Unmet demand for articles like eyeglasses, dentures, hearing aids, prostheses, orthopaedic shoes, walkers and canes ranges between 40 and 80 percent among Cuba’s older adult population, according to the National Survey on Population Aging conducted by the ONEI between 2010 and 2011.

Independently of the financial costs for families in caring for their elderly — which includes what can be costly nursing personnel — studies show that this process has an impact on individuals who devote themselves to caring for older adults, and who are generally women.

“I see it in my workplace every day. Women continue to play the role of family caregiver. They quit their jobs and set everything aside to devote themselves to caring for the ill and the elderly,” Dr. Dunia Marrero, who works with a family doctor’s office in Havana, told IPS.

In the capital, home to more than two million people, repairs are urgently needed for sidewalks and streets to prevent accidental falls; architectural solutions are needed to provide more access for older adults; and the poor state of elevators in most of the city’s multi-storey buildings needs to be addressed.

“I live alone on the tenth floor, and the elevator is always broken. Sometimes weeks go by before I can come downstairs,” said Aurelia García, who lives in Old Havana. She told IPS that whenever she can, she spends the day at a community centre where meals are served and she can socialise with others her age.

Known as the Casas de los Abuelos (“grandparents’ houses”), these centres are one of the best options in Cuba, given the widespread opposition to permanently housing the elderly in retirement homes, something that is only done in extreme cases, according to Alfonso, the Census director.

The main question is “finding solutions that don’t have a high economic cost and that are decent and effective, and using institutional capacities, the capacities of the Cuban community, and the solidarity that exists at the neighbourhood level, and mobilising older adults,” Alfonso said.

Experts also recommend the design and implementation of a comprehensive population policy and a specific policy for integral services for the elderly; the promotion of geriatric and gerontological specialties; and the need to raise awareness in society as a whole to learn how to live with older people.