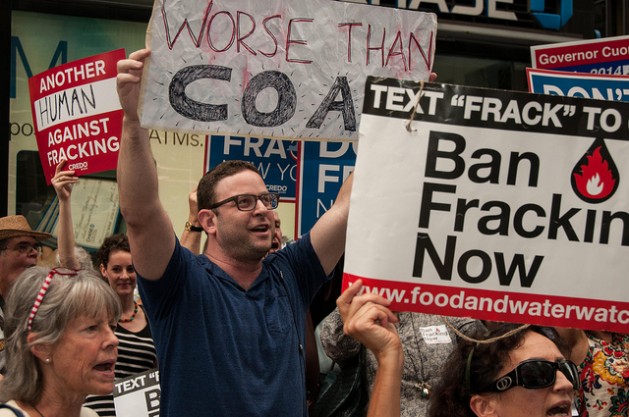 All it would take is a few regulations and a few tens of millions of dollars over the next two decades to bring dramatic reductions in emissions of short-lived planet-heating pollutants like methane, black carbon or soot and smog.

These are dangerous air pollutants and reductions could save millions of lives, according to studies by the United Nations Environment Programme and the World Meteorological Organization.

“This is one thing that can be done to slow the very disturbing rapid meltdown of the Arctic sea ice,” said Ellen Baum, senior scientist at the Clean Air Task Force, an international NGO working to reduce air pollution.

Last week, the annual summer melt of sea ice shocked scientists by falling 18 percent below the previous record low. Summer ice this year is half what it was 30 years ago and is disrupting weather patterns in the Northern hemisphere.

Every summer, the surface of Greenland melts but this year’s melt was off the charts. Parts of Greenland ice continued to melt for 40 to 50 days longer than normal, Tedesco told IPS.

This process is being driven by warmer air temperatures, a drop in snowfall and the fact that much of the ice is no longer white but covered with black soot particles, he said.

Those soot particles come from burning diesel and biomass thousands of kilometres away, in Europe, Asia and North America. Snow and ice reflect much of the sun’s heat energy but the combination of the black soot and meltwater ponds, more of that heat is absorbed by the ice, leading to increased melting.

“It is very troubling what is happening in the Arctic,” Rafe Pomerance, former U.S. deputy assistant secretary of state for environment and development, said at a press conference.

A new international group, the Climate and Clean Air Coalition, was created in February this year to spearhead efforts in all countries to take action on these air pollutants. A package of 16 measures to reduce emissions of black carbon and methane have been identified and countries are now working together to find ways to act on those measures.

Last week, the Coalition met in Ghana to work together with African nations to identify ways to reduce emissions of short-lived climate and air pollutants from the African continent. Reducing emissions of methane, black carbon and tropospheric ozone would have “substantial and immediate health, crop yield and other environmental benefits for Africa” in addition to reducing warming, the Coalition reported.

Hi-efficiency cook stoves are a simple, low-cost technology to reduce emissions of soot. In the transport sector, cleaner-burning diesel engines, black carbon filters and low-sulphur fuels can be used. Preventing oil and gas flaring in the fossil fuel sector as well as the reduction of methane emissions are other needed actions.

Much of this has been known for several years. Developed nations have taken action on air pollution, particularly by shifting to cleaner-burning diesel engines. However, there is still much to be done. Europe’s air pollution remains dangerously high, warns a new report released Monday. Despite regulations, tiny particles of soot are reducing European life expectancy by as much as two years, according to the European Environmental Agency study.

In the United States, it has been a “slow process to put these measures into practice”, said Baum. Last year, after decades of inaction, the U.S. finally enacted new regulations to reduce emissions and improve efficiency of motor vehicles. The slow progress “has a lot to with the lack of political will”, she said.

The recent boom in hydraulic fracturing, or fracking, is “taking us in the opposite direction” regarding emission reductions, said Erika Rosenthal of the U.S.-based environmental NGO Earthjustice.

“Fracking has made the U.S. one of the top 10 methane-emitting countries,” Rosenthal told IPS.

The process of drilling for natural gas using the fracking method of pumping large amounts of water and chemicals underground to access shale gas deposits results in large emissions of methane, several studies have shown. Hundreds of thousands of shale gas wells are currently being “fracked” in the United States and Canada. These leak methane, a highly potent global warming gas

Methane has 105 times the warming potential of CO2 over a 20-year time frame, after which it rapidly loses its warming potential. If large amounts of methane are released through fracking – as seems likely with hundreds of thousands of new wells forecast in the next two decades – Howarth says global temperatures could rocket upward from 0.8C currently to 1.8C in 15 to 35 years.

“We’d better have a zero tolerance for methane emissions from fracking,” said Baum.

However, even if there were mandatory requirements – presently there are none – it is difficult to enforce when governments at state and federal are cutting budgets and staff, said Baum.