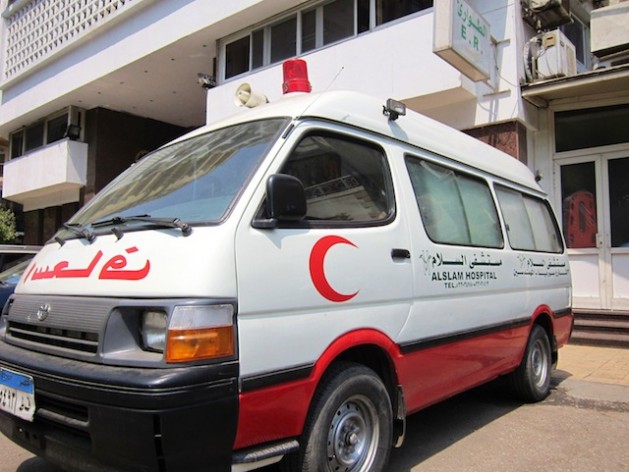 CAIRO, Sep 3 2012 (IPS) - The emergency room of Mansoura International Hospital is closed, a lock and chain securing its entrance. Ambulances carrying stroke and burn victims are ordered to go elsewhere.

Just hours earlier, dozens of people stormed this mid-sized hospital in northern Egypt, carrying a relative injured in a car accident. The group overpowered the military officers guarding the front door, fired shots in the air, and threatened to kill doctors and nurses unless they operated immediately on their relative.

Five security personnel were wounded in the attack, and a hospital worker was bludgeoned so hard he remains in a coma.

This was not an isolated incident.

Dr. Ahmad Bakr, secretary-general of the Cairo Medical Syndicate, has been documenting the incidents since he was elected to his post last October. He holds several hundred reports of attacks on hospitals in Cairo. Thousands more are believed to have occurred outside the capital.

“I personally know of dozens of doctors and medical staff who have been injured in these attacks, two quite seriously,” Bakr told IPS. “The attacks have also resulted in the injury and death of patients and their relatives.”

The violence spills into hospitals in many different ways, facilitated by the absence of an effective police force in the wake of last year’s uprising. Doctors regularly find themselves caught in the middle of violent feuds and fights – and without any police protection.

“We see quarrels that begin in the streets and when one victim comes to the hospital, his enemies follow him there with the intention of finishing him off,” says Bakr. “The handful of police and soldiers assigned to protect the hospital are either unarmed or unwilling to interfere.”

In one recent incident, doctors at a public hospital in the northern town Matariya scrambled for cover when thugs armed with swords and shotguns burst into the emergency room and killed a newly-arrived patient.

Yet the majority of hospital violence, according to Bakr, arises from patients and their relatives frustrated by the glaring deficiencies of the nation’s ailing healthcare system. Decades of corruption and negligence have eroded Egypt’s health sector, forcing underpaid medical staff to operate in poorly equipped facilities.

“Our healthcare system has been decaying for over 30 years,” says Bakr. “Most countries allocate about 15 percent of the state budget to health, in Egypt it’s less than four percent, so we’re going backward.”

Undoubtedly, Egyptians have a lot to complain about. The country faces an acute shortage of intensive care units (ICUs). Ambulances carrying patients in critical condition must often travel for hours in search of a hospital with ICU space or suitable facilities, losing valuable time.

Meanwhile, budgetary constraints and mismanagement have led to chronic shortages of medical supplies. In many cases, patients must send their relatives to locate and purchase the medicine required for their own treatment. Life-saving drugs for certain heart conditions have to be smuggled in from Europe.

“The rotten state of our healthcare system sets the scene for confrontations,” Bakr explains. “Before the uprising, people had no motivation to defend their rights, but the revolution changed the public’s spirit. Now they’re ready for a fight.”

And with inadequate security, doctors and hospital workers are left to absorb that anger. Verbal abuse and intimidating behaviour have become routine; physical assaults involving weapons are on the rise.

“We used to have one or two incidents a year, now it’s five or six a week,” says Dr. Mohamed Abdel Ghaffar, who resigned as general manager of Ahmed Maher Teaching Hospital last month due to the escalating violence.

The situation can quickly get out of hand, he says. Frustrated by real or perceived injustices, friends and family of the patient are driven by blind rage.

“I’ve seen it where they’ve stopped thinking about the patient and all they can think about is revenge,” says Abdel Ghaffar. “They hold the government responsible and attack anyone they perceive is related to it – including doctors trying to help the patient (they brought in).”

Increasingly, doctors and hospital workers find themselves caught between their ethical duty to treat patients and the need to protect themselves from harm.

“Whenever there are attacks, hospital staff close down the emergency rooms until security is restored,” says Bakr. “El-Demerdash and Qasr El-Ainy, two of the capital’s biggest hospitals, have been forced to shut their emergency rooms dozens of times in the past few months. On some nights both of them are closed.”

That only adds to the problem, forcing ambulances to search further and longer for an available ICU.

Security arrangements have fallen short, he says. Outnumbered and often outgunned, the police conscripts assigned to protect hospitals “seem to vanish” whenever an attack occurs.

In response to protests, Egypt’s newly elected president ordered the military to secure 100 of the country’s busiest hospitals. The Ministry of Interior also announced plans to establish a special police force to manage hospital security.

“The problem cannot be solved by security alone,” warns Nashed. “It requires a multi-disciplinary approach.”

Many incidents could be avoided if hospitals were given sufficient resources and medical supplies to treat critical care patients, he says. In addition, doctors and hospital staff should be better trained on how to deal with angry patients and their relatives. Better communications skills could help defuse the “triggers” that lead to violent altercations.