Families of ‘Disappeared’ and Forensic Institute on Good Terms Again 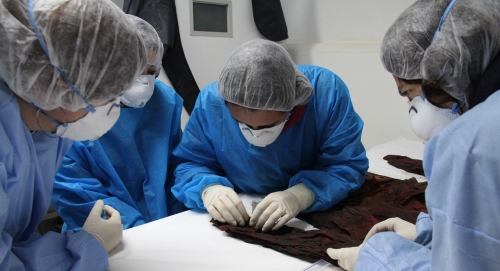 SANTIAGO, Sep 4 2012 (IPS) - Relations between the families of people “disappeared” by Chile’s 1973-1990 dictatorship and the forensic institute, which have been tense since a 2006 scandal when the state body admitted that it had misidentified 96 of the 126 bodies found in a common grave in 1991, are beginning to mend.

The vice president of the Group of Families of the Detained-Disappeared (AFDD), Mireya García, stressed the significance of the work done by the forensic institute, the Servicio Médico Legal (SML). She said it is “extremely important…because it restores the names of bodies buried in secret graves, who now have identities and families (to mourn them),” she told IPS.

Judge Alejandro Solís confirmed on Aug. 29 that the SML, together with the
University of North Texas Center for Human Identification, was able to identify 51 bodies exhumed from unmarked graves in Patio 29, a desolate section of the General Cemetery of Santiago.

A large number of those killed in that district in the first six months of the dictatorship were buried in Patio 29.

García said that when the families found out about the misidentification of the bodies, “they felt despair and anguish.”

“It was a very difficult moment for the families who were directly affected. But it did not come as a surprise because we had already denounced irregularities,” she said.

A process of reforms of the SML was launched in the wake of the scandal. The changes included the creation of teams of specialists, and improvements in the chain of custody, from laboratory identification to the sending of remains to national or foreign laboratories for analysis.

So far, 120 of the 1,200 victims of forced disappearance have been identified.

The bodies of another 2,024 victims had been returned to their families after they were executed by the dictatorship, according to the National Truth and Reconciliation Commission’s 1991 report and the National Commission on Political Imprisonment and Torture’s 2004 report.

The bloody aftermath of the coup

The report produced by a special mission sent to Chile in 1974 by the Organisation of American States said conservative estimates spoke of 1,500 deaths during the period immediately following the coup.

The OAS report also states that more than 220 people were summarily shot and killed in that period.

According to SML figures, between Sept. 11 and Dec. 31, 1973, 1,631 bodies were brought to the forensic institute’s morgue. Many of them were identified by their families, but others were buried in unmarked graves in Patio 29.

The dictatorship’s systematic practice of forced disappearance came to light in December 1978, when the charred remains of 15 men from small farming communities were found in the furnaces of an abandoned limestone mine in Lonquén, on the outskirts of Santiago.

Just six months before the discovery, Interior Minister Sergio Fernández had said, in response to pressure from the relatives of the disappeared as to the whereabouts of their missing family members, “it is very feasible that the large majority of the allegedly disappeared have gone into hiding or have died in armed shoot-outs carrying false identity papers, thus preventing their identification.”

But the bodies found in Lonquén proved this was not true. The victims had all been detained under different circumstances in October 1973, and it was clear that their bodies had been purposefully hidden.

The discovery of the bodies provided the first concrete evidence that hundreds of opponents of the regime had been summarily executed, and their bodies concealed.

Dr. Patricio Bustos, director of the SML, told IPS that the dictatorship’s efforts to hide the evidence of the victims, starting with a campaign code-named “operation television removal”, were the main hurdle to identifying the bodies.

In the operation, put into effect after the bodies were found at Lonquén, troops around the country were ordered to dig up the remains of political prisoners from secret graves and dump them in the ocean.

Another difficulty, Bustos said, was Operation Condor, a coordinated plan among the military governments that ruled Argentina, Bolivia, Brazil, Chile, Paraguay and Uruguay in the 1970s and 1980s, aimed at tracking down, capturing and eliminating left-wing opponents.

Operation Condor was created in Chile with the approval of the U.S. government.

Science at the service of truth and justice

“We won’t be satisfied until we identify as many people as possible,” Bustos said. “But now we do it with other techniques, with DNA testing that offers complete certainty of a positive identification.”

A databank of DNA samples from family members of victims was also created. Today it holds more than 3,000 samples.

Besides the remains of victims buried in Patio 29, the SML has identified 12 of the 24 bodies found in Fuerte Arteaga, a fort in a mountainous area in Peldehue, northeast of Santiago, where victims of the Sept. 11, 1973 attack on the La Moneda presidential palace – in which Allende died – were found.

In addition, 14 of the 15 bodies found in Lonquén have been identified.

Other victims identified include Uruguayan leftist intellectual Mónica Benaroyo, whose decapitated body was found in the Arica desert. The mummification of her corpse made it possible to obtain fingerprints and identify the body, even though her name was not on the official list of victims of forced disappearance.

In all of these cases, the SML worked together with the Institute for Legal Medicine of the Innsbruck Medical University in Austria.

But while relations between the families of the disappeared and the SML have been improving, there is still a ways to go.

“The damage they caused us, especially those families who were given the remains of the wrong person, is irreparable, as it came on top of the disappearance and the decades of absence. And that is the responsibility of the SML, but also of the authorities at the time,” García said.

On Aug. 31, a court in Chile ordered the state to pay 526,000 dollars in reparations to the family of Luis Dávila, whose remains were exhumed in Patio 29 and misidentified by the SML in 1994.

SML director Bustos said “trust is achieved by acknowledging that the lifeblood of all of this work is not the forensic sciences or researchers, but the families.

“We only take a step towards justice based on elements of the truth, to help forward this process that has been so painful, so drawn-out, and above all, so difficult,” he said.