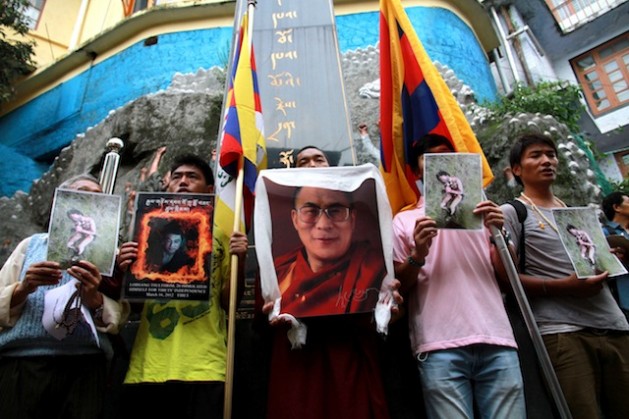 DHARAMSALA, India, Sep 6 2012 (IPS) - Two Tibetan teenagers set themselves on fire and took to the streets of Aba in southwestern China last week, managing to walk only a short distance before collapsing. They both died the following day.

Since 2009, there have been 51 self-immolations inside of China, as Tibetans protest against increasingly repressive Chinese policies and call for the return of the Dalai Lama, who fled Lhasa, the former capital of Tibet, for India in 1959.

In an address to the Foreign Correspondents’ Club of South Asia in New Delhi last month, Tibet’s prime minister-in-exile, Lobsang Sangay, expressed his disappointment at the lack of attention Tibet has received from the international community as the number of self-immolations continues to climb.

“The tragedy in Tibet has been unfolding for the past 50 years but the reaction does not seem to be as much as for the Arab Spring,” he said.

Indeed, the world watched as the self-immolation of Mohamed Bouazizi in Tunisia sparked a revolution in orthern Africa in 2011, bringing down a number of dictatorial regimes across the Arab world as it spread.

Yet despite the string of self-immolations in Tibet and numerous appeals made by both the Tibetan government-in-exile and various rights groups, the desperate actions of these self-immolators seem to have elicited little response from the international community.

Tenzin Norsang, joint secretary of the Tibetan Youth Congress (TYC), an international non-governmental organisation with more than 80 regional chapters worldwide, cites a general lack of interest as the cause for this apparent low response.

“The first thing, is interest,” he says, “If you’re not concerned, if it’s not your struggle, you won’t make an effort to understand it.

“And this is not only the case with Tibet. After the Second World War, more than 100 countries gained independence and nobody took interest.”

Rigzin Namgyal, a 26-year-old yoga teacher, also from Aba in southwestern China, where most of the self-immolations have taken place, echoes Norsang’s view about the level of international attention reflecting a lack of interest, but sees the struggle’s age as being the main issue.

“People like variety and spontaneity, but they’ve been hearing about the Tibet issue for 50 years, since we lost our country,” he says.

Shortly after the establishment of the Chinese Communist Party in 1949, 40,000 People’s Liberation Army troops invaded Tibet. Following three years of armed resistance, the number of Tibetan rebels was growing and fears arose that the Dalai Lama’s safety was under threat. Finally, in 1959, Tibet’s spiritual leader escaped to India, inspiring a mass exile of more than 80,000 Tibetans.

“Tibet has been in the news for the last 50 years, that’s why they’re not giving specific attention to it – it’s an old issue,” Namgyal continues.

However, according to Dr Robert Barnett, director of Modern Tibetan Studies at Columbia University, the effectiveness of a protest to effect political or social change is not entirely dependent on its presence on the front page.

“Protest impact depends on the type of government you’re dealing with more than the type of protest or media coverage you get,” he says.

“You could argue that Tibetans and their supporters are thinking in terms of strategies that have worked with weak governments, not with an extremely robust one, like China,” Barnett says.

“Tibetan protestors, especially those abroad, tend to use protests and foreign media to communicate their anguish and suffering, but in China that’s widely seen as courting sympathy or even as trying to get more funding and benefits.”

The Tibet issue has made headlines in the past, namely during periods of civil unrest, such as during the 1987 protests and the 2008 uprisings, both of which increased tensions between Tibetans and Chinese authorities and saw a rise in the arrest and arbitrary detention of Tibetans.

But the world’s general knowledge and positive reception of the issue can largely be attributed to the high profile of the Dalai Lama, the widespread image of Buddhists as being non-violent and compassionate, and, as Barnett puts it, “the tone-deaf propaganda statements and policies of Chinese officials, who often bring embarrassment to themselves.”

But this movement will inevitably face several challenges in gaining attention in the future, as China works to improve its propaganda style and as the Dalai Lama, now 77, ages.

In addition to these factors, Barnett believes that, due to all of the media attention garnered and international sympathisers gained during the protests in the late 1980s, there exists a “success deficit” when it comes to communicating the issue of Tibet.

“Many (Tibetans) still tend to rely on publicity for everything,” he says.

“Put crudely, we all need to learn to ‘think politically’ in a deeper, long-term sense – not to conflate politics only with media inches and TV coverage.”

As Barnett sees it, the Tibetan movement has actually received a relatively high response from the international community, especially as compared to other serious cases of human rights abuse, such as mass rape in the Congo.

Support groups and organisations, including the TYC and Students for a Free Tibet continuously run awareness campaigns, and a number of influential administrations have pledged their support to the Tibetan cause, including those of Australia, France, Canada, and Japan.

But Norsang says that these campaigns and statements of concern are simply not enough.

“We have received a huge amount of international support, with many people expressing their solidarity,” he says. “But now, apart from their concern, we need a practical solution.”

On Sep. 18, the United Nations General Assembly will hold its 67th session in New York City – and it is on this day that TYC plans to stage a protest in New Delhi in an effort to communicate the need for fact-finding delegations to be allowed into Tibet.

In the meantime, the Central Tibetan Administration has made an appeal to supporting administrations to collectively engage the Chinese government in dialogue during the meeting, encouraging it to open its borders to both fact-finding delegations and international media.

As TYC members and supporters migrate to New Delhi to take part in an organised indefinite hunger strike, which began on Sep. 3, Norsang tries to maintain some perspective.

“I feel proud of what we have achieved so far,” he says. “Compared to the struggle of other countries, like India, which was under British rule for 200 years, our struggle has achieved a lot in 53 years.”