DOHA, Oct 25 2012 (IPS) - Japan’s crippled nuclear power plant is struggling to find space to store tens of thousands of tonnes of highly contaminated water used to cool the broken reactors, the manager of the water treatment team has said.

About 200,000 tonnes of radioactive water, enough to fill more than 50 Olympic-sized swimming pools, are being stored in hundreds of gigantic tanks built around the Fukushima Daiichi plant.

Operator Tokyo Electric Power Company (TEPCO) has already chopped down trees to make room for more tanks and predicts the volume of water will be more than tripled within three years.

“It’s a time-pressing issue because the storage of contaminated water has its limits, there is only limited storage space,” the water-treatment manager, Yuichi Okamura, told the AP news agency in an exclusive interview this week. 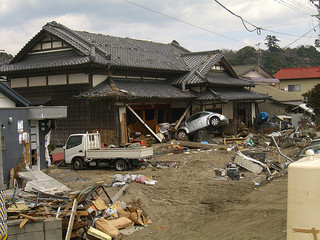 The Yotukura fishing village was one of the areas devastated by the Mar. 11, 2011 tsunami that caused the nuclear plant meltdown. Credit: Suvendrini Kakuchi/IPS

Dumping massive amounts of water into the melting reactors was the only way to avoid an even bigger catastrophe after the meltdown at TEPCO’s Fukushima Daiichi nuclear power reactor, caused by the Mar. 11, 2011 tsunami.

Okamura remembers frantically trying to find a way to get water to spent fuel pools located on the highest floor of the 50m high reactor buildings.

Without water, the spent fuel likely would have overheated and melted, sending radioactive smoke for miles and affecting possibly millions of people.

But the measures to keep the plant under control created another huge headache for the utility: What to do with all the radioactive water that leaked out of the damaged reactors and collected in the basements of reactor buildings and nearby facilities.

“At that time, we never expected high-level contaminated water to turn up in the turbine building,” Okamura said.

He was tasked with setting up a treatment system that would make the water clean enough for reuse as a coolant, and was also aimed at reducing health risks for workers and at curbing environmental damage.

At first, the utility shunted the tainted water into existing storage tanks near the reactors.

Meanwhile, Okamura’s 55-member team scrambled to get a treatment unit up and running within three months of the accident, a project that would normally take about two years, he said.

Using that equipment, TEPCO was able to circulate reprocessed water back into the reactor cores.

But even though the reactors now are being cooled exclusively with recycled water, the volume of contaminated water is still increasing, mostly because groundwater is seeping through cracks into the reactor and turbine basements.

“By purifying the water using the ALPS system, theoretically, all radioactive products can be purified to below detection levels,” he said.

But in the meantime its tanks are filling up, mostly because leaks in reactor facilities are allowing groundwater to pour in.

Masashi Goto, a nuclear engineer and university lecturer, said the contaminated water build-up posed a major long-term threat to health and the environment.

He said he was worried that the radioactive water in the basements may already be getting into the underground water system, where it could reach far beyond the plant via underground water channels, possibly reaching the ocean or public water supplies.

The plant will have to deal with contaminated water until all the melted fuel and other debris is removed from the reactor, a process that will easily take more than a decade.