FUKUSHIMA, Japan, Apr 6 2011 (IPS) - My decision to visit Fukushima – the area worst hit by the massive quake, tsunami and nuclear power accident on Mar. 11 – was taken one afternoon last week after a long meeting with scientists. 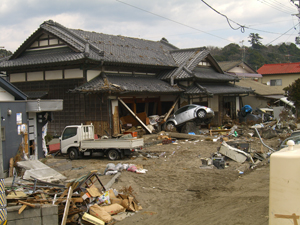 The invitation to accompany the scientists on a private fact-finding mission to Fukushima was irresistible. The scientists and engineers who gathered that day, had, for decades, harboured misgivings over reactor safety design and policies and were active in the ongoing debate over the future of nuclear energy in Japan.

“There is a dire need for a real time radiation monitoring network to be set up in areas affected by the damaged Fukushima Daiichi Nuclear power plant,” Atsuto Suzuki, head of the high-energy accelerator research organisation at Tsukuba University, explained. “This is where our expertise can begin to play a role.”

We started our journey at 6am, armed with bottles of mineral water, clothing that could be discarded before our return to Tokyo, and special facemasks to protect us from radiation when we approached the 20-kilometre exclusive zone around the damaged reactors.

Around our necks dangled radioactive dosimeters, resembling large thermometers. The machines would show accumulated microsieverts of radiation contamination on our bodies and instructions were given that we carry them all the time to record the rise in the figures while noting the exact locations.

“Our own documentation of radioactive material is key to understanding the Fukushima accident,” explained Yoichi Tao, a physicist specialising in risk management design, who is now retired. He is also a graduate from Tokyo University.

But Tao is not part of the cosy group of experts who have guided Japan’s ambitious post-war nuclear power industry. Instead, having experienced the atomic bombing of Hiroshima when he was just six years old, the scientist, contends the bitter truth that Japan had chosen to ignore till today, was that fool-proof safety in nuclear power is simply a “myth”.

“It is time,” he explained, “to embark on a clearer definition of the complex concept of safety. This calls for research from diverse perspectives – the views of residents, independent opinions, as well as taking in an assessment on the impact of the accident on other countries.”

The three-hour drive to Fukushima was hauntingly poignant. With most of the motorways now open for traffic, we passed the breathtaking scenery that marks Japan’s northern region – mountains dotted with pristine pine forests on one side of the road and the pale blue, now serene, ocean glistening on the other. Sharp gusts of chilly air wrapped our car on a near empty road, a sign of the lost appeal of Fukushima – which had been up till now a tourist destination boasting therapeutic hot springs and fresh seafood.

A harrowing scene awaited us at Iwaki, our entry point into Fukushima. Iwaki, a bustling coastal fishing city had borne the full brunt of the tsunami, with some waves as high as 14 metres.

We stopped at Yotsukura hamlet where half the population of 1,000 had suffered fatalities, were still missing, or had lost their homes, fishing boats and cars.

People, protected with masks, appeared dazed while they pulled at piles of washed out rubble in a feeble attempt to reconstruct. “The community is still scattered in evacuation sites because shops continue to lack food and water and there is a severe shortage of gasoline,” explained Yuuji Kojima, head of the rescue operation in the local municipality.

The afternoon schedule was to get as close to the nuclear disaster as possible and the route we selected was not along the coast but inland. Getting closer to the vicinity, we passed miles of deserted villages where dogs and cattle – abandoned by their owners – walked past shuttered houses and broken roads.

The sky had begun to darken and we feared rain that would worsen our risk of contamination. We pulled on our masks and another layer of clothes. Then we watched our monitors.

Passing the 30-kilometre limit, a recent extension of the risk zone ordered by the government, we reached Miyakoji-machi, once a lush farming area, now turned a ghost village.

A police car stood at the entry point and ordered our car to stop. Officers explained politely but firmly that only government officials or the Tokyo Electric Power Company – operator of the Fukushima nuclear power plant – were permitted inside. We pulled the car aside and kept the engine running while scanning the area for a suitable site for the scientists to set up their monitoring equipment.

Rain had turned to snow. Inside the darkening car, our monitors had begun to climb – mine was showing an accumulated 325 microsieverts, the equivalent of almost one chest x-ray already.

The most excruciating experiences during our visit were in the two evacuation centres we visited.

Located in Tamura-town, the first contained 800 local residents who were packed into a large gymnasium. It was not the tsunami, but the accident in the nuclear power plant they had tolerated for the past 40 years, that had devastated their lives.

Cardboard linings demarcated tiny spaces for families. Old people covered in blankets lay in heaps off to one side.

Wanting to find out for myself, I deliberately avoided wearing the slippers given to guests who were asked to remove their shoes at the entrance. My feet froze almost instantly, reflecting the discomfort of the nuclear refugees who have lived on the cold and damp floor for weeks.

Portable toilets at the other refugee centre were situated outside the building, making visits during the freezing nights a nightmare for the elderly. A lone doctor at the centre described streams of patients seeking medical assistance. “The authorities had promised us for years everything was safe. We do not believe them anymore,” she explained, declining to be photographed or identified. She hesitated to be overtly critical of their situation, preferring to focus her attention on the sick.

As Japan struggles to contain the world’s second most catastrophic nuclear power accident, the public here is calling for an alternative energy model.

This marks the beginning of an unprecedented effort of the expanding network of scientists and designers in Japan – who are also reaching out for advise from their counterparts in the United States and Europe – to develop what some call the world’s most comprehensive study on safety.

For now, though, Tao and his team are concentrating on negotiating their way into the tightly controlled bureaucratic systems here that have long resisted outside intervention – one of the more troubling aspects of Japan’s economic development which now lays exposed by the disaster.

Returning to Tokyo, late at night, we wondered aloud what lessons had Japan learned from the disaster. We asked Tao, what would come next. “The answers will take time,” he said. “More important right now is maintaining a collective effort to contain the nuclear tragedy that must involve both proponents and opponents of nuclear energy technology.”

After more than 20 years in Japan, I knew Tao and his community of concerned scientists were right. At a time of tragedy, Japanese wisdom had won. First things first, and only then can the right platform be established to debate the larger challenges.