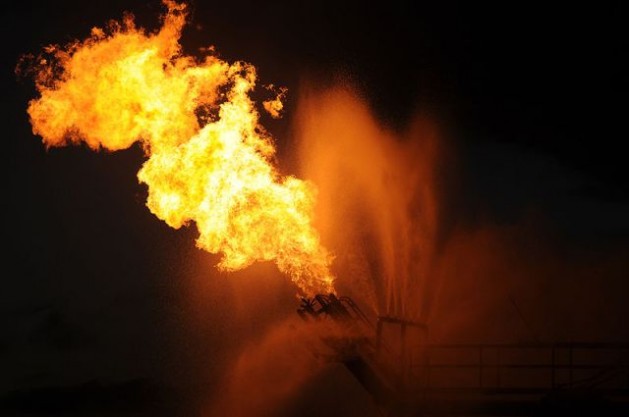 The total amount of gas estimated to have been flared last year, about five trillion cubic feet, is said to equal the amount of natural gas used in the United States over a full year. Credit: public domain

WASHINGTON, Oct 24 2012 (IPS) - An international coalition led by the World Bank is calling for state-backed and private oil producers to reduce “gas flaring” by an additional 30 percent over the next five years, saying that doing so would be equivalent to taking 60 million cars off of the roads.

Analysts widely characterised the goal as both ambitious and significant, though it follows on an apparent levelling out in flaring reductions in recent years.

Since a major new push began in 2005, the World Bank-led Global Gas Flaring Reduction (GGFR) partnership estimates that, through 2011, its actions have brought down gas flaring by 20 percent, eliminating around 274 million tonnes of carbon dioxide emissions.

But according to the GGFR – a coalition of 20 major oil companies and 19 countries – which started a two-day high-level meeting in London on Wednesday, both the economic and environmental impacts of gas flaring require far greater reductions.

“A 30 percent cut in five years is a realistic goal,” Rachel Kyte, the World Bank’s vice-president for sustainable development, said in a statement Wednesday. “Given the need for energy in so many countries – one in five people on the planet are without electricity – we need to raise our ambition. We simply cannot afford to waste this gas anymore.”

Oil producers resort to flaring when gas, a by-product of oil, is brought up to the surface but cannot easily be repurposed for consumers. Instead, producers simply burn off the product, the value of which the World Bank, based here in Washington, puts at some 50 billion dollars a year.

The total amount of gas estimated to have been flared last year, about five trillion cubic feet, is said to equal the amount of natural gas used in the United States over a full year.

Environmentalists have long called for the outright banning of the practice, though flaring does in fact release far lower levels of greenhouse gases than simply allowing the gas to evaporate. However, the process does not deal with one notorious pollutant, nitrogen oxide, and still releases significant carbon dioxide, and thus significant greenhouse gas-related worries remain.

Alternative uses for this gas range from producing power, refining it for use in local markets, or even putting it back into the ground. But analysts say the economic benefits for companies in doing so are low.

Nonetheless, the World Bank reports slow but steady success in reductions, particularly since 2005. According to data released Wednesday, Mexico has cut its flaring by two-thirds and Azerbaijan by half in just two years, while Kuwait gotten its flaring down to just one percent of previous levels.

In addition, Qatar and Congo have been singled out for using the gas to make electricity.

Significant improvements have also been seen in many of the world’s worst flaring offenders. “Huge investments” by GGFR partners have reportedly helped Nigeria to reduce its flaring by nearly a quarter through 2011, while Russia, the most significant culprit in this regard, has reduced flaring by around 40 percent, though those figures rose last year. (Data on the world’s top 10 gas flarers can be found here.)

Still, on Wednesday the bank warned that both of these countries, particularly Russia, in addition to Mexico, Iraq and Kazakhstan, need to make significant improvements.

Missing from this list, however, is one of the most significant outliers in the global push against gas flaring: the United States, which has increased its gas flaring by more than three times since 2007, more than any other country.

The U.S. is currently in the midst of a sea-changing boom in natural gas production, thanks almost entirely to new technologies (so-called hydraulic fracturing or “fracking”) that have allowed for the exploitation of previously off-limits gas deposits in shale and other geological formations.

Against the promising country-by-country numbers, total global gas flaring actually increased last year by around two billion cubic metres, which World Bank analysts have put down to output from Russia and, specifically, the U.S. state of North Dakota.

“The small increase underlines the importance for countries and companies to sustain and even accelerate efforts to reduce flaring of gas associated with oil production,” Bent Svensson, manager of the GGFR partnership, said when the 2011 figures became available in July. “It is a warning sign that major gains over the past few years could be lost if oil-producing countries and companies don’t step up their efforts.”

The U.S. is now the fifth-largest flarer, behind Russia, Nigeria, Iran and Iraq. While part of this is due to the multifold increase in production in recent years, it also appears to be due to a lag in implementing the necessary infrastructure.

“Due to insufficient natural gas pipeline capacity and processing facilities … over 35% of North Dakota’s natural gas production … has been flared or otherwise not marketed,” the U.S. government reported in late 2011. “The percentage of flared gas in North Dakota is considerably higher than the national average; in 2009, less than 1% of natural gas produced in the United States was vented or flared.”

The World Bank declined to comment specifically on the United States in this regard.

But potentially more significant is a new rule passed by the country’s Environment Protecion Agency (EPA) in April.

Aimed at trying to cut down specifically on the methane released during venting around gas production, the EPA’s ruling gave U.S. producers until 2015 to get required technologies in place that will eliminate the need to burn off gas. In the meantime, however, the EPA stated that it would begin requiring companies to flare excess gas, as the lesser of two pollution evils.

The new rules have been generally well received by both industry and activists.

“Based on the EPA rules, the U.S. is going to have 100 percent no-flaring by 2015, which will be pretty good in terms of the rest of the world,” Kyle Ash, a Washington-based legislative analyst with Greenpeace, an advocacy group, told IPS.

“At the time, EPA data showed that just half of the fracked wells had proper (gas-capture) venting technologies in place, so we understood why the EPA made this decision. And though this timeline isn’t horrible, it does appear that the EPA did somewhat bend to industry demands. After all, this technology is available right now.”

However, Ash warns that, with fracking increasing exponentially, “no one yet has a handle on the leakage of methane,” a compound known to be up to 25 times more harmful than carbon dioxide as a greenhouse gas.