Immigration Reform May Be Big Winner in U.S. Elections 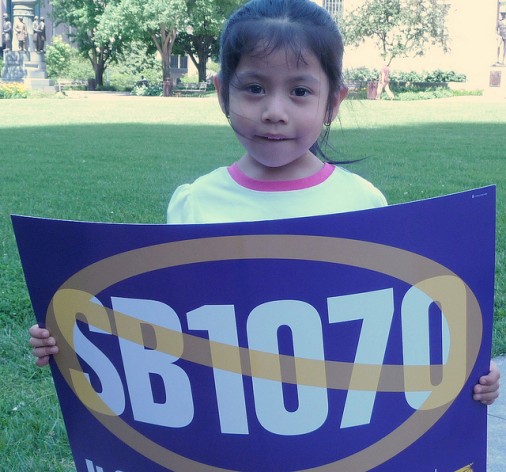 WASHINGTON, Nov 8 2012 (IPS) - In the aftermath of a surprisingly lopsided victory for President Barack Obama’s Democratic Party and for progressive causes more broadly, one of the key discussions taking place here is over the suddenly increased prospects for comprehensive immigration reform, long an issue so divisive that few politicians have been willing to tackle it.

“Coming out of this election, there is now increased debate in political circles on how to create a pragmatic immigration system, with Republicans and conservatives engaging in this debate to a degree our country has never seen,” Ali Noorani, the executive director of the National Immigration Forum, the largest such group in the country, said while speaking with journalists on Thursday.

The reasons for this sudden rise in immigration’s profile are twofold, though they are based on the same general issue: that President Obama’s slim re-election majority was given a critical boost by the Latino vote, nearly three-quarters of which supported the president. Latinos, meanwhile, are the country’s fastest-growing demographic.

First, then, Latino voices have quickly begun demanding that President Obama now move towards rewarding their support by making immigration reform one of his top legislative priorities, which he has already indicated he will do.

“As a result (of the election), the mandate for President Obama, along with the newly elected members of Congress, should be clear: voters want an immigration system that treats aspiring citizens with dignity, and provides a roadmap for those living and working here to integrate fully into society,” Marielena Hincapié, executive director of the National Immigration Law Center, said in a statement, noting that Latinos “will no longer tolerate the status quo of record deportations and aggressive detention policies”.

Second, and of paramount importance, as the Republican Party begins a painful process of introspection over its losses, there is a growing consensus among all but the most conservative parts of the party that it needs to overhaul its hard line on immigration reform – and that the next few months will offer an unusually strong opportunity to come together with the Democrats to do so.

“On immigration reform, if ever there is a time to be hopeful that it will happen, it is now,” Allie Devine, a lobbyist for the Kansas Business Coalition, told journalists on Thursday. “This is a social and moral issue, but it is also very much a monetary issue that needs to be addressed.”

The nationalist far right in U.S. politics, including the so-called Tea Party faction, has become increasingly mobilised against immigration in recent years, exacerbated in part by the downturn in the economy. While frustrating for pro-business and law enforcement elements within the Republican Party, this has also stymied broader efforts at forging a legislative “path to citizenship” for immigrants, with extreme conservatives refusing to negotiate until the entire U.S.-Mexico border is fenced and “secured”.

The federal government has previously made half-hearted attempts to overhaul its complex mishmash of immigration policies, which has resulted in some 12 million undocumented workers living within the United States. President Obama urged Democrats in the Congress to introduce initial legislation in 2009, but on political pushback the attempt was dropped.

Eventually, the legislative drive was overshadowed by the bruising partisan fight over health care reform. At the time, Obama’s chief of staff referred to immigration reform as the “third rail of American politics”, a reference to the dangerous electrified track that powers a subway – and that everyone is urged not to touch.

Just three months ahead of the election, Obama did eventually sign a minor but lauded executive order that halted deportation of certain children of illegal immigrants. But in late October, he stated unequivocally that, if elected, “I’m confident we’ll get done … immigration reform”, listing it as his second priority after the looming debt negotiations.

He reiterated this stance in his re-election acceptance speech early Wednesday morning, noting that “fixing the immigration system” would be an immediate concern.

It remains unclear exactly how the Republicans will respond. After all, despite Republican losses in the White House and Senate races, the party picked up seats in the particularly partisan House of Representatives.

Still, many are interpreting the election results as a clear indication that U.S. voters want to see greater cooperation – and progress – on key issues, including immigration. That should embolden many members of Congress that their jobs won’t be on the line if they choose to support broad reform.

“In the last election, many Republican officials felt incorrectly that they needed to pander to the base of the party – to the loud, shrill, anti-immigration people out there – and I’m excited now that there is this open opportunity to do something about it,” Mark Shurtleff, the Republican attorney-general for the state of Utah, said Tuesday.

“I’m very concerned – we have to reconsider who the Republican base is and how to define the soul of the Republican Party. Moderates within the party need to come back to this discussion and reject the extreme rightwing partisan ranting that does not represent the majority of Republicans.”

Law-enforcement officials such as Shurtleff and business advocates such as Devine make up two parts of a three-pronged strategy now being pushed by those looking to capitalise on the strengthened environment for immigration reform.

“The only way that immigration reform is going to pass is if those who hold the Bible, those who wear a badge and those who own a business exert grassroots pressure. But that pressure has begun to build,” the National Immigration Forum’s Noorani says.

While Congress is out of session until next week, Noorani says that initial meetings are already being set up. Further, during the first week of December, a two-day national strategy meeting will also bring together Republicans from across the ideological spectrum to come up with a more unified stance on the issue of immigration reform.

And while nearly all involved are now hoping that the new dynamics will allow for enough consensus to arrive at a comprehensive reforms package, most say a gradual approach would still be acceptable.

“Comprehensive reform is the utopia, but we can go piecemeal,” the Reverend Samuel Rodriguez, president of the National Hispanic Christian Leadership Conference, told reporters Thursday. “The critical issue is getting some sort of legislation through that sends a message that lets people know that they can come out of the shadows – something to deal with the fear and angst that immigrants suffer from in this country.”