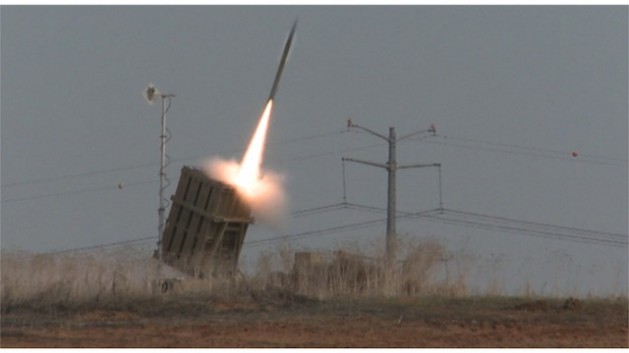 Israeli Prime Minister Benjamin Netanyahu will now need an Iron Dome to protect him from his opponents. Credit: Pierre Klochendler/IPS.

JERUSALEM, Nov 21 2012 (IPS) - Ending Israel’s first military operation since the Arab Spring changed the Middle East depended on both the diplomatic blitz exerted on Israel and Hamas and the extent of the military blows exchanged between them. As for Prime Minister Benjamin Netanyahu, the ceasefire must live at least until his re-election.

Whereas he called the shots when initiating the ‘Pillar of Defence’ operation last Wednesday, Netanyahu is fully aware that Hamas will now be calling the shots as far as the ceasefire is concerned.

A “non paper” allowing room for Israeli manoeuvring was the preferred way out of a potentially hazardous ground operation into Gaza, if only because Netanyahu learned the lessons of the “Cast Lead” assault (2008-9) on Hamas in Gaza which ended with Israel accused of “war crimes” and a 43-paragraph agreement that was never respected.

The new agreement is informal, and structured along two phases.

First, “quiet versus quiet” is to be enforced – an immediate cessation of rockets attacks, attacks on Israeli civilians and troops on the Gaza border, and attacks from Sinai by Palestinian guerrillas. Hamas must enforce the understanding on all Palestinian factions.

In exchange, Israel simultaneously stops bombing Gaza as well as targeting Palestinian militants, but not preventive actions against potential attacks against Israelis initiated from the occupied West Bank.

While Phase One deals with implementing the ceasefire and testing its effectiveness, Phase Two includes talks for a longer-term agreement involving guarantees from Egypt and the U.S.

But the prospect of a truce is even more burdened by the many conflicting interests and demands of the many parties involved in the ceasefire’s monitoring effort.

Israel will insist on guarantees that Egypt blocks the flow of smuggled weapons from Sinai into Gaza through underground tunnels. Egypt has had difficulty policing Sinai – partly because President Muhammad Mursi’s Islamic government doesn’t want to be perceived as Israel’s police force.

While it’s got no influence on Egypt’s readiness to ease its blockade on the Gaza Strip by opening the Rafah border crossing to Gazans and goods, Israel will reject the Hamas demand that it eases its navy blockade which, it argues, stops weapons entering Gaza. But it will alleviate its already insubstantial ground blockade.

Israel’s military operation is over, and all in all, very little has changed.

Netanyahu has adopted the prescription offered by a protagonist of Giuseppe Tomasi di Lampedusa’s novel, The Leopard: “If we want things to stay as they are, things will have to change.”

To change a thing or two so as to leave the situation as is, Netanyahu has, prudently yet determinedly all through his four-year tenure, used a strategy of sceptical nihilism towards the Palestinians.

Israeli officials close to him explain his disbelief and wavering attitude regarding peace negotiations with Palestinian President Mahmoud Abbas by invoking the strengthening of Hamas as a result of the Middle East becoming fundamentally Islamist, and the unresolved schism between the Palestinian Authority in the West Bank and its arch-rival Hamas in Gaza.

Indirectly, letting Hamas become a growing force in the West Bank enables the Right under Netanyahu to oppose any change in Israel’s occupation of the West Bank.

Hamas meanwhile has grown more popular than Abbas, as demonstrations in its support throughout the occupied West Bank show.

The Islamist movement can boast its role at the vanguard of the Palestinian resistance against the Israeli occupation. After all, it’s managed to lob homemade long-range M35 rockets onto Tel Aviv and Jerusalem.

The Netanyahu operation has rendered a major plank of Abbas’s strategy in absence of peace talks irrelevant – his bid to have the UN General Assembly endorse Palestine as a non-member state on Nov. 29.

Exploiting the fear factor amongst Israelis of a stronger Hamas in Gaza coupled with stronger support for Hamas in the West Bank is a potent electoral card for the incumbent Prime Minister.

Yet, if rocket fire resumes while the tentative ceasefire is enforced, Netanyahu might risk his January re-election – especially as the one-million Israelis residing in the south of the country, tired of living under constant shelling, hope for a solution that maintains quiet once and for all.

For if Netanyahu didn’t factor in the election campaign when he launched his military campaign, his prospective re-election was definitely an important factor to end it.

The “Iron Dome” defence system has certainly proven effective in intercepting rocket attacks from Gaza. Now’s the time for Netanyahu to wish he had a political “Iron Dome” umbrella against attacks from his opposition for having maintained things as they are by letting the situation worsen in the West Bank and Gaza.