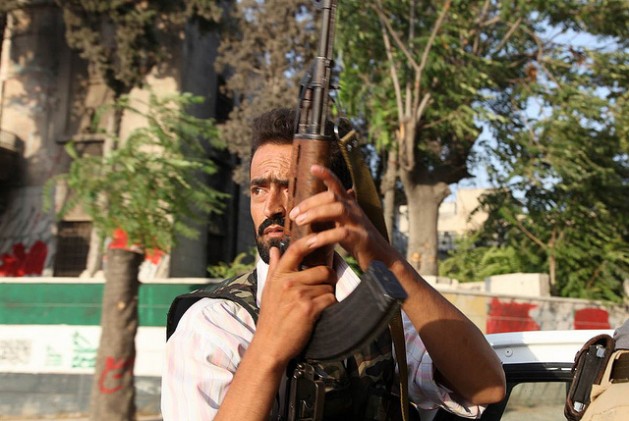 Rebels travel in the back of a pickup truck in a town in northern Syria. Credit: Freedom House/cc by 2.0

UNITED NATIONS, Nov 6 2012 (IPS) - Following its failed efforts to contain the 19-month-old insurrection in battle-torn Syria, the United Nations has issued a new warning: the besieged country is heading towards “destruction”.

A much-publicised ceasefire for the Islamic holiday of Eid-ul-Adha last month was violated by both warring factions, while a video of summary executions of Syrian soldiers have triggered charges of war crimes against the opposition.

At this point, no one in Syria – not the government, not the rebels – can emerge from the crisis with an unsullied reputation.

Both factions are now strong candidates to face charges before the International Criminal Court (ICC) for crimes against humanity.

Lakhdar Brahimi, the joint special representative of the United Nations and the League of Arab States, has also hit a dead end both with the Syrian government and the rebel groups fighting to oust President Bashar al-Assad, who is refusing to step down or agree to a political compromise.

“The United Nations remains helpless against the political and military complexities inside Syria,” says one Asian diplomat.

This may well be one of the biggest political failures of the United Nations, he said, pointing out the sharp divisions in the Security Council where China and Russia have already vetoed three Western-inspired resolutions against Assad.

Briefing the Security Council Tuesday, Jeffrey Feltman, under-secretary-general for political affairs, said the situation inside Syria is turning grimmer every day, and the risk is growing that this crisis could explode outward into an already volatile region.

He said there are signs of this spillover in Lebanon and Turkey, as well as activities in recent days in the area of U.N. peacekeeping operations in the Golan.

Feltman provided a grim scenario of the new reports of atrocities: “a shocking video” of alleged executions of captured soldiers by opposition forces; credible reports of the use of cluster bombs by the government; as well as fighter jet strikes reportedly firing in Damascus for the first time and continued shelling of population centres.

Meanwhile, the humanitarian situation remains dire: over 382,000 refugees, more than 2.5 million in need of assistance, and continued difficulties of access and funding with winter approaching.

“The current path will lead Syria to its destruction,” he warned.

Clearly, there is a need to shift away from the military logic that is prevailing at the moment.

“The solution must be arrived at through a political process. It has to be a Syrian-led process; it can’t be imposed. It must bring real change and a clean break from the past,” Feltman told the Security Council.

Navi Pillay, the U.N. high commissioner for human rights, has continued to monitor the violence, executions and the killings of civilians since March 2011 when the crisis erupted. She told the Human Rights Council last month the situation amounts almost to a terrible disregard – and contempt – for the protection of civilians, as the country plunges ever deeper into conflict.

“Human rights abuses are rampant, and have reached the point where mass killings, summary executions and torture are the norm,” Pillay said.

In addition, she said, the humanitarian situation is deteriorating rapidly with tens of thousands of civilians now suffering shortages of food, water, electricity, employment and other basic necessities.

“As we speak, civilians, including children, are continuing to be injured and killed in Syria virtually every hour of every day… No end to the conflict is in sight,” she said, pointing out that she fully supports the initiatives by Secretary-General Ban Ki-moon and Brahimi, “whose job, as he himself has said, appears at this point to be close to impossible.”