SANTIAGO, Dec 6 2012 (IPS) - The legacy of Chile’s 1973-1990 dictatorship, which left some 3,000 people dead and “disappeared”, remains alive in the country’s society and political system, says journalist and writer Mauricio Weibel.

In this interview with IPS, Weibel says that elements of the regime of the late dictator General Augusto Pinochet survive in the constitution inherited from the dictatorship, and are the root cause of what he sees as Chile’s present social crisis, and of the failings of its political system.

Weibel and his colleague Carlos Dorat are the authors of a book, “Asociación Ilícita – Los archivos secretos de la dictadura” (Illicit Association: The secret archives of the dictatorship), one of the most widely read books in the country since its publication in October. 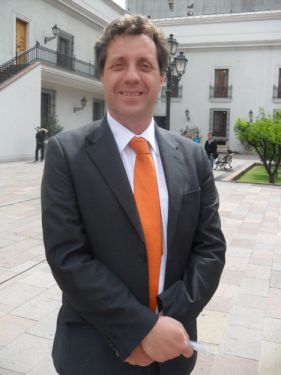 Official documents reveal how the dictatorship made its decisions, how it was allied with other military regimes in the Southern Cone of South America (Argentina, Brazil, Paraguay and Uruguay) by means of Operation Condor, aimed at tracking down, capturing and eliminating left-wing opponents, and how its diplomats kept watch on Chilean exiles around the world.

Q: How did you do the research for “Asociación Ilícita”?

A: We wanted to put on an exhibition in the Museum of Memory for the 40th anniversary of the military coup (Sept. 11, 2013). As I researched, I came across these files in the ministries of the interior and foreign affairs. They were memos and communications exchanged between 1973 and 1990. It took four months to put the files in order, organise and read them, followed by five weeks of writing.

Q: What did the archives reveal about the dictatorship’s secret intelligence network?

A: We decided to describe decision-making and high-level communications during the dictatorship. There is clear evidence of full participation in the repression by civilians and by the foreign ministry. No one was innocent; everyone knew.

In the documents, Chile’s foreign ministers request copies of Operation Condor from the secret police. In a few cases, the secret police suggest to the ministry of the interior that a particular exiled person should be allowed back into the country, but the suggestion is rejected.

Basically, we explain how they operated, what information was communicated, what reports were written, and what kinds of materials were burned, as recorded in the certificates of destruction.

Q: The book cites personalities active in the dictatorship who hold office today, like Alberto Cardemil, now a member of Congress. What was his role?

A: Cardemil was under-secretary of the interior, and is now a member of the lower house for National Renewal, the party of President Enrique Piñera. He used to distribute reports from the Central Nacional de Informaciones (CNI) – the secret police – to the ministries, and he was in charge of distributing files with information on opponents of the regime.

It was known that he had been involved in some way, but we had no proof of anything. Now he has a lot of questions to answer: whether he kept copies of these files, of his reports, and whether he has used this information obtained by means of torture, since democracy was restored.

And the same is true of the other civilians, because many ambassadors are shown to have been involved. Cardemil denied the existence of the files, and he denied distributing CNI information.

Q: Have you had any problems with the justice system because of the publication of the book?

A: No, because all the information is based on and backed up by documents. It is all based on signed documents with no opinion, no adjective added. It is raw information.

Q: What impact has the book had?

A: The book is currently among the top ten most widely read in Chile. It is a book for future generations. This month we are also presenting it in Argentina. At the book launch in Santiago, at the Museum of Memory, there were more than 600 people, and at the Santiago book fair there were 200 invited guests.

Q: Why is it important to shed light on the dictatorship’s secret files?

A: Without memory there can be no future; we have to take a look at why we arrived at these horrors so that they can never happen again. We have to carry out profound social and political reflection. And we must also find out why people who now hold high political office were involved.

There is apparently a certain amount of interest in Latin America in revisiting the recent past, to tell the stories that have not been told or were only told in an official version, and to rescue it all from oblivion.

Q: What was the role of the Catholic Church during the dictatorship?

A: The Chilean Church was quite committed to the defence of human rights. Cardinal Raúl Silva Henríquez was one of the most important and most powerful opponents of Pinochet. The Vicaría de la Solidaridad (a human rights agency of the Church) protected persecuted citizens, and provided legal services such as opening legal cases and drawing up writs of habeas corpus. The clergy were involved in dangerous work.

Q: What evidence was found in the archives about Operation Condor?

A: We thought Operation Condor was a strategy of the secret police. But it was a concerted operation by the Southern Cone governments, which cooperated above and beyond conflicts over some issues.

For example, Chile and Bolivia broke off relations in 1978 over La Paz’s maritime claim (to access to the Pacific ocean). But in 1979 they were still cooperating under Operation Condor. The countries had no diplomatic relations, and yet their regimes continued to cooperate at the level of intelligence.

Q: Did diplomats carry out surveillance on exiles?

A: Movements of Chileans abroad were infiltrated. It’s amazing how much information they had. It went far beyond the limits of national borders.

Q: The Chilean dictatorship was the longest lasting in Latin America. Is it still alive in Chilean society?

A: The dictatorship is not only in our memory, but also in the whole constitutional framework Chile has inherited from it, like the 1980 constitution, approved when there were no electoral registers; the political system; the binomial electoral system (in which the top two candidates are elected from each district); and the economic system.

It is omnipresent, and it is a major cause of the political and social crisis Chile is experiencing today. Our 21st century democracy has its origins in the dictatorship.

Q: What was the democratic transition like, under the long shadow of Pinochet up to his death in 2006?

A: It was a democracy under military tutelage. After 1984, the dictatorship suspected that the political and economic system would fall, and that ultimately they would be investigated and tried for crimes against human rights.

At the beginning of the transition, the president could not remove the commanders-in-chief of the armed forces from their posts. Eventually we came to our present position, with a constitution dating back to the dictatorship, where the state has a secondary role regarding the supply and demand of public goods, and an electoral system that prevents proportional representation of voters.