Seven Years After Katrina, Preparing for the Next Disaster 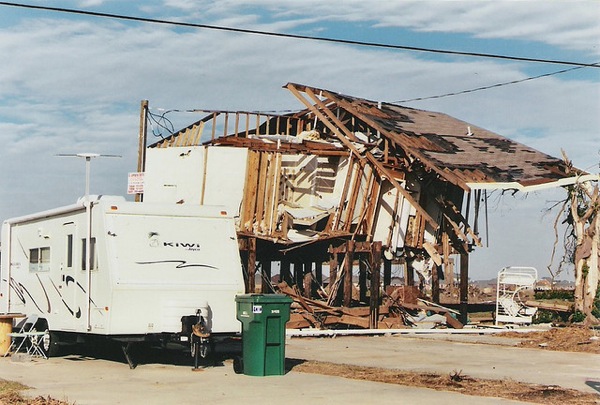 ATLANTA, Georgia, Dec 14 2012 (IPS) - Many residents are still rebuilding their lives seven years after Hurricane Katrina devastated the city of New Orleans and the Gulf Coast region of the United States. Those who are able are looking ahead and organising so that they will be better prepared for future natural disasters.

Although at a recent conference in Doha, Qatar, the international community failed to reach meaningful agreement on preventing more global warming, disaster preparedness will become an increasingly important topic for communities, especially those near water, around the world.

A new book, “Not Meant to Live Like This: Weathering the Storm of Our Lives in New Orleans”, by the members of the All Together in Dignity (ATD) Fourth World Movement living in New Orleans, addresses the topic of community organising for disaster preparedness.

A symposium at the Carter Center in Atlanta on Dec. 13 addressed the same issues. Both the book and the symposium received support from the Southern Partners Fund, a philanthropic group that promotes social change in the American South and which launched a Justice Fund for Disaster Relief and Renewal shortly after Katrina.

In the Ninth Ward, he said, “homes were torn town and not rebuilt”, adding, “I am not saying it was intentional…but somebody must have made the decision.”

“That happens in every community,” Marilyn Self, manager of the Disaster Readiness programme at the American Red Cross of Greater Atlanta, said during a panel at the symposium. “It’s never the same again. Even if every home is rebuilt and everyone comes back – which they don’t – it’s not the same church spire. The high school has a different look. It’s not the one you have a treasured memory in.”

“You have a personal responsibility to prepare for yourself in an emergency,” Winston Minor, chair of the Public Safety Committee for the Concerned Black Clergy of Atlanta, said during the panel, advising people to always have at least three days of food, water and medical supplies on hand in case disaster strikes.

“FEMA [the Federal Emergency Management Agency] expects you to be able to make it for three days,” Minor said.

But, Minor pointed out, “the community has a responsibility to make sure the community can respond,” and so “everyone in the system needs to be educated”. He said churches should be a vital component of that effort.

The Red Cross has been chartered by Congress since 1881 to help respond to disasters across the United States. Its ability to provide help, however, depends in part on partnerships it establishes at the local level, Self remarked.

One of the biggest problems faced by the Red Cross during and immediately after disasters is shelter. “We need spaces to hold several thousand people. We’ve been bickering with the mega-churches, but there is no agreement in place yet. It’s always, ‘We’ll get back to you.  Let’s talk to our lawyer,'” Self said.

Transportation is also an issue. Local workers who drive public buses or school buses are often relied upon to help transport people out of harm’s way when a storm is coming.

“That has to be communicated down to the person who drives the bus. Public employees need to know there’s a role for them in the disaster plan,” Self said.

Local organisations should have partnerships in place before disasters occur to determine how to cooperate in responding to them.

One key issue after Hurricane Katrina was the drastic decrease in affordable housing units.

In New Orleans today, “affordable housing is very scarce and the rent is very high,” Marie Victoire, co-author of “Not Meant to Live Like This”, told IPS. These factors make it “difficult for low-income people to come back”.

Public housing communities were demolished and replaced with so-called mixed-income housing. Four developments with nearly 5,000 units were demolished after Katrina. Replacement housing has not yet been built, but fewer than a thousand affordable units are planned, with the rest of the units at or near market rate.

“There was no right of return for former residents. They have a million ways to keep people out,” Jay Arena, assistant professor of sociology at the College of Staten Island, who lived in New Orleans at the time, told IPS. Arena is the author of a book called “Driven from New Orleans: How Nonprofits Betray Public Housing and Promote Privatization”.

“The political and economic elite saw Katrina as a grand opportunity to deepen their neo-liberal privatisation agenda, change the racial and class demographic of the city, and that’s what they did, by closing down thousands of units of badly needed but hardly damaged public housing units, clearly in violation of international law,” Arena said.

Many low-income families paid 200 to 400 dollars per month on run-down housing before Katrina. After those homes were renovated following the hurricane, prices went up to 700 or 800 per month.

Arena believed that other countries should learn many lessons from what has happened in New Orleans. Above all, he argued, the likelihood of future disasters is another reason to greatly expand the public sector. He added that policies must be put in place to promote the right of return, including rent control and the rights of renters to return to their housing.

“They closed most of the public schools, they closed down the public hospital, Charity Hospital – that probably caused more deaths than even Katrina,” Arena concluded.