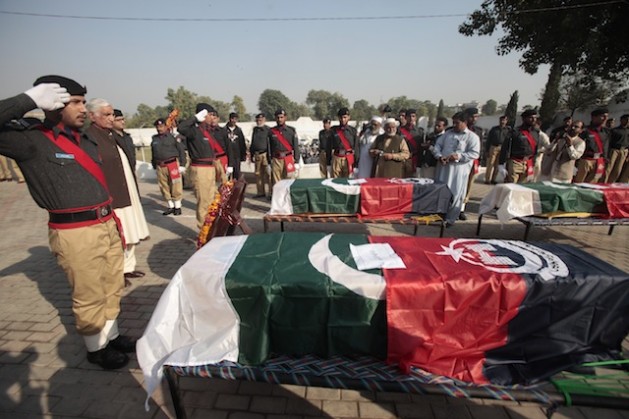 Farewell to soldiers killed in a Taliban attack. Such attacks have killed many policemen, and demoralised others. Credit: Ashfaq Yusufzai/IPS.

PESHAWAR, Pakistan, Dec 7 2012 (IPS) - The Taliban’s ruthless campaign against security forces has demoralised the forces, who are unable to put up a strong resistance to Islamic militants.

“Taliban militants have established a world record of savagery. They have slaughtered soldiers and common people with knives and displayed their heads in public places to send a message across the forces that they must not chase them at the behest of government,” says a police inspector in Qissakhwani bazaar in the old city area of Peshawar in northern Pakistan.

“The police are less equipped than militants, who have rocket launchers, bombs and hand-grenades,” police inspector Jawad Ali tells IPS. He says that the militants’ ferocity against security forces have demoralised the forces to the extent that most police stations and checkpoints are locked up during nights.

Some personnel seek medical leave to stay away from duty, prompting the government to issue a notification banning vacation except in unavoidable circumstances. “Genuinely ill personnel get required leave whereas those enjoying good health should stay alert to threats,” Jawad Ali says.

“We have received about 450 applications from policemen seeking leave on health grounds,” says Dr Wasan Khan at the Police Services Hospital. “Only 15 had illnesses for which they were advised rest. Others had arrived only to get a doctor’s prescription that they were ill and couldn’t perform duty.”

About 1,400 security men from the Frontier Constabulary (a 50,000 strong paramilitary force) were sacked two years ago when they refused to take part in an anti-Taliban operation on the outskirts of Peshawar, the capital city of Khyber Pakhtunkhwa.

The government has launched a campaign to scale up morale among the security forces. “Dying while fighting the enemy is martyrdom and they shouldn’t surrender in any circumstances to the militants. They did in many instances,” police inspector Jawad Ali says. “This would only further embolden the attackers.”

He says 17 soldiers who were beheaded in Kunar province of Afghanistan in June this year after being kidnapped from checkpoints in Dir, one of the 25 districts of Khyber Pakhtunkhwa, had first surrendered. After this they were blindfolded, had their hands tied behind their backs, and were taken away to Afghanistan’s Kunar province.

Militants had beheaded seven soldiers in the same area only a week earlier.

In other recent attacks, militants attacked the Mattani checkpost near Peshawar Oct. 12 and killed six policemen including superintendent of police Khursheed Khan. The militants slaughtered Khan and took his head away. The head was found hanging in a local market the next day.

On Nov. 12 seven policemen including superintendent of police Hilal Khan were killed in a suicide attack in Qissakhwani bazaar.

“All these attacks are meant to terrify the police and security forces so they stay away from defending the people. Beheading them is a strategy to spread fear in the forces,” police officer Abdullah Shah tells IPS.

The past five years have seen more than 600 attacks on police stations and police vans, according to the local government in Khyber Pakhtunkhwa. The bomb disposal squad has defused 644 bombs and explosive devices in this period.

“We have now 90,000 policemen in the province compared to only 35,000 when we took power in 2008,” Khyber Pakhtunkhwa information Mian Iftikhar Hussain says. “We are also giving plots of land and cash amount of five million rupees to the families of policemen who die at the hand of militants.”

The United States has provided vehicles, communications and other equipment worth 17 million dollars to help the police deal with the Taliban, Hussain says.