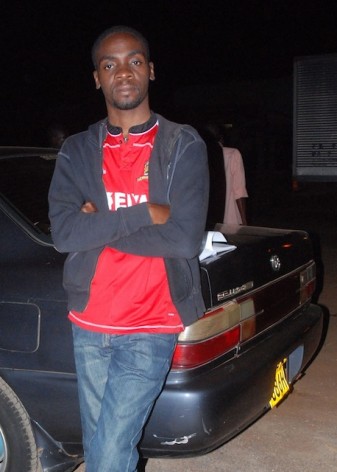 Gay activist Gerald Ssentongo said activists would file a petition in the constitutional court against the bill if it were passed into law. Credit: Henry Wasswa/IPS

Dec 6 2012 (IPS) - Gay activist Gerald Ssentongo of Uganda is afraid to talk openly about his cause. Not only that, but he is terrified of being “caught” socialising with gay people and only meets his friends at night in out-of-reach places.

“The fear for our lives is everywhere, but it has increased of late. I am now verbally attacked and last month my friend was assaulted simply because she said she was a lesbian. The attacks can happen in any scenario,” the 35-year-old told IPS.

His concerns come at a time when the parliament of this East African nation has revived the infamous Anti-Homosexuality Bill, also known as the “Kill the Gays” bill.

Member of Parliament David Bahati introduced the bill in 2009. At the time it proposed the death sentence for people who engaged in intercourse with same-sex, under-aged or disabled persons. A convicted HIV-positive criminal who engaged in same-sex intercourse would also be given the death penalty.

In addition, the bill proposed a life sentence for a person convicted of touching another person of the same sex “with the intention of committing an act of homosexuality”.

However, threats from Western nations to cut aid and lobbying by international human rights groups forced the Ugandan government to shelve the bill.

Homophobia heightened in this conservative country in early 2011 when one of Uganda’s leading gay activists, David Kato, was murdered after a local tabloid, Rolling Stone, published his name and those of 99 other alleged “known gays and lesbians” under the headline “Kill the Gays”.

His death drew international condemnation. As a result the bill was set aside for discussion by President Yoweri Museveni and was allowed to expire in May 2011.

But the government revived it in November 2012. The Ugandan Speaker of Parliament Rebecca Kadaga recently said that the country’s culture had “no space for gays” and she vowed to push the bill into law “as a Christmas gift.”

However, the bill currently standing before parliament is slightly different from the 2009 version.

“The death sentence was removed,” one of the members of the parliamentary committee that amended the bill, Meldad Lubega Sseggona, told IPS. “The sentences now range from a few years in jail to life imprisonment for the convicted. The bill is now entirely in the hands of the speaker of parliament.”

But much still remains of the original bill. Life sentences will still be handed out to people convicted of engaging in same-sex intercourse. And the current bill also proposes a three-year sentence for a person convicted of failing to report a homosexual offence.

“It has passed through the committee and will be tabled for debate before parliament soon,” Sseggona said.

Ssentongo and other gay activists said that legislation against gays would only place them in danger from the community, which has yet to accept their existence.

“Apart from the few elite, many people think the bill is already law. We have already been made criminals in the eyes of the public,” he said.

Julian Pepe Onziema, an activist with the gay rights group Sexual Minorities Uganda, told IPS that the NGO’s members were trying to raise awareness about the dangers of passing the bill into law.

“The bill should be removed in its entirety. It is a bad law. It should not be there in the first place. Removing the death sentence is useless because a life sentence is already bad enough,” she said.

“We are lobbying the international community. We are trying to create as much awareness as possible despite the odds we face. We are telling the world that the parliamentarians are rushing to pass a bill that many people do not understand. They have not addressed the dangers involved (for gays) thereafter,” she said.

Activists are worried that revisiting the bill creates tension in an already uneasy co-existence between gays and the general public. Activists who were previously engaged in rights campaigns have gone underground, fearing for their lives, Ssentongo said.

“When we are in a group and start talking about homosexuality, people begin whispering. We fear this can trigger others and result in mob justice.

“In 2009, our movement was growing fast, but now only a few people are active. In recent days many have even completely gone into the closet. Things are worse now. I cannot even own a car because with it, I can be easily identified,” Ssentongo said.

“Issues of human rights violations should not be left to Africa alone. We are calling upon the international community to do everything within its power so that the bill is stopped,” he said.

In recent months several European countries, including the United Kingdom, Norway, Denmark and Ireland, suspended aid to Uganda over corruption involving the diversion of millions of dollars in Irish aid.

Germany has also suspended its budgetary support to the country, saying its decision is related to the anti-homosexuality bill.

German Federal Minister for Economic Cooperation and Development Dirk Niebel was quoted as saying, “if discrimination against human rights is passed through the Ugandan parliament, this would have consequences for our cooperation.” Uganda still depends on Western financiers for 25 percent of its annual budget.

But Ugandan government spokesman Fred Opolot denied that Germany’s decision to suspend aid was due to his country’s anti-gay stance, and argued instead that it came after reports of aid mismanagement.

Opolot told reporters on Dec. 3 that the government supported parliamentary debate on the anti-homosexuality bill.

“The issue should not raise alarm because the death penalty was dropped from the bill, and Ugandans should be allowed to talk about this issue which affects their country,” he said.

Ssentongo said gay activists would file a petition in the constitutional court against the bill if it were passed into law.