Escaping to Ecovillages in Argentina 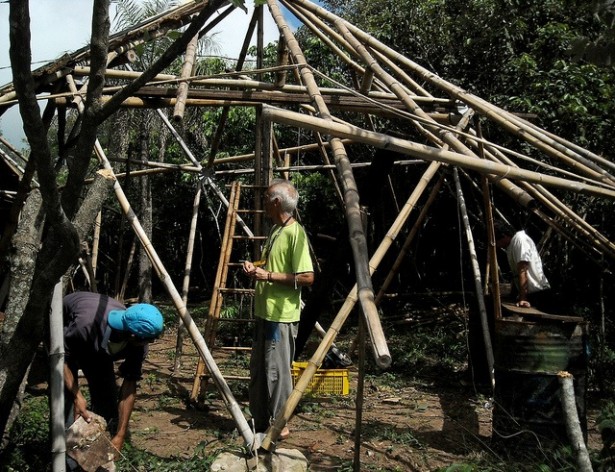 Ecovillages, where people grow their own produce and live sustainably with nature, are mushrooming across Argentina. Credit: Natalia Ruiz Díaz/IPS

BUENOS AIRES, Feb 14 2013 (IPS) - Almost imperceptibly, sustainable settlements that combine community living with the preservation of natural resources have mushroomed across Argentina as an alternative to rampant consumerism.

Ecovillages, where people grow their own produce in community gardens and live sustainably in close contact with nature, are a growing trend in the provinces of Buenos Aires, Santa Fe and Misiones (east and northeast), Córdoba (centre-north), Catamarca (northwest), San Luis (west), Río Negro (south), and even in the capital city of Buenos Aires.

Some of these initiatives — which operate as living laboratories — have sprung from successful family projects that planted the seed of an eco-friendly community. Others started out as an idea conceived by a group of friends who share a common worldview.

“It’s sort of like regaining your freedom,” said Tania Giuliani, a biologist with a Master’s degree in sustainable development who is participating in the establishment of a new ecovillage on an island in the district of El Tigre, on the last stretch of the Paraná Delta, in northeastern Buenos Aires.

"People live solitary and materialistic lives, working all day, coming home to an apartment and buying chemical-laden foods... (Moving to an ecovillage) doesn't mean going back to the Stone Age; it's about recovering the capacity to make our own decisions."
Giuliani has not given up her teaching position in Buenos Aires but, even though the project is still in the early stages, she left her apartment in the city and moved to the island so she can work on her house.

The project is called ‘i-tekoa’ (which means “water village” in Guarani) and in addition to Giuliani it involves seven other friends who decided to embrace this alternative way of life. A total of eight houses will be built using natural materials found on the land and based on designs in harmony with the marshland environment.

The group also to plans to erect a community centre to hold art, gardening and permaculture workshops.

Permaculture — a contraction of “permanent agriculture” or “permanent culture” — originated in the 1970s in Australia and “involves designing sustainable development models where people can live in harmony with nature”, Carlos Straub told Tierramérica.

Straub was among the first to introduce permaculture in Argentina back in the 1990s, along with the founders of Gaia, the first ecovillage in the country, which has operated since 1996 in the Navarro district of the province of Buenos Aires.

Gaia consists of cottages built with natural materials and it houses the Argentine Institute of Permaculture, which offers training workshops for anyone interested in replicating this experience. 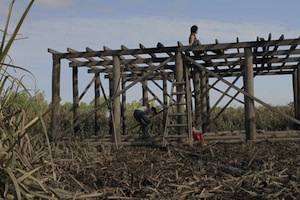 Building a house in the i-tekoa ecovillage. Credit: Courtesy of i-tekoa.

Gaia is part of the Global Ecovillage Network (GEN) that connects thousands of similar initiatives.

Straub is currently the head of Cidep (Centro de Investigación, Desarrollo y Enseñanza de la Permacultura), a permaculture research and teaching centre, located on a small farm near El Bolsón, in the southwest province of Río Negro, which has offered workshops since 2004.

Twenty families are establishing a new ecovillage next to Cidep’s facilities, which provide temporary shelter for eight members of the project while they build their houses.

Straub also teaches courses in different communities in the Patagonia region, both in Argentina and Chile.

“There’s a very large movement of people migrating away from cities and looking to purchase land with others for initiatives like this,” he said.

Before starting the i-tekoa project, Giuliani lived in an ecovillage in New Zealand. For her, capitalism imposes an individualistic, consumerist and anti-natural way of life that people are increasingly turning away from.

She joined a group of friends who were as unhappy as she was with their way of life and bought a plot of land where they are now building their houses and a community centre. The buildings are being constructed without filling or drying the plot, which is marshland, so as to preserve the natural purification role played by wetlands.

Non-native trees are being cut down and their wood used to build the houses. Native species will be planted in their place. Project participants are still debating whether to use dry toilets or biodigesters as a sewage treatment solution.

“Living solely off the land seems a bit idealistic. Our goal is to live off what we produce in our gardens and (the money we raise in) the centre’s workshops, and gradually, if we can, we’ll give up our jobs in the city,” Giuliani said.

According to Straub, ecovillages are multiplying as a reaction against a way of living that is exhausted. “People want a simpler life that will allow them to fulfil old dreams without having to wait until they retire,” he said.

“It’s not about going back to primitive times or the Stone Age; it’s about recovering the capacity to make our own decisions. Ecovillages may not be the solution for everyone, but the project helps bring back a more humane way of looking at life,” he added.

The idea is to “change our perspective. The miracle has to occur within us, and if that happens it doesn’t matter whether you live in an ecovillage or in the middle of the city, what matters is that your life is not governed by the system,” Straub said.

Straub himself lives 15 kilometres from Cidep, in El Bolsón, and is not sure he wants to live in an ecovillage. But he does believe he can play a role in the process as seed producer.

Most importantly, he says, more and more people are choosing to go down this road. “When I started in Gaia there was only 15 or 20 of us, but at an event I attended recently there were 500 other people who had joined this experience.”

*This article was originally published on Feb. 9 by the Latin American network of newspapers Tierramérica.