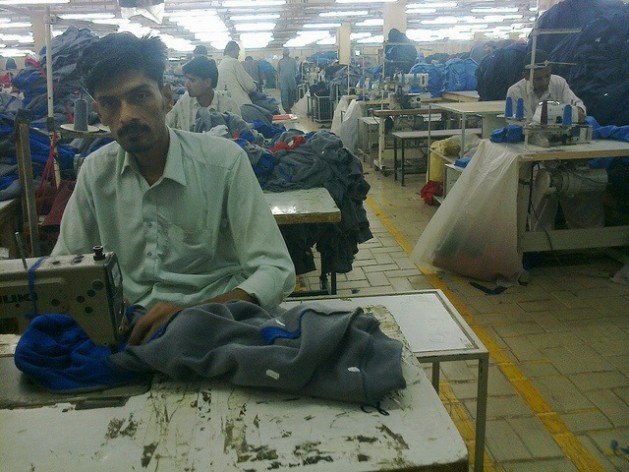 A worker at a factory in Lahore surrounded by piles of sportswear: the garments are in high demand in Europe, where they are sold for exorbitant prices. Credit: Irfan Ahmed/IPS

He holds no letter of appointment, does not know the name of his employer, receives his weekly wages in cash from a contractor and toils daily before a furnace burning at 800-1,000 degrees Celsius without any safety equipment.

Heat and steam from the furnace often cause him severe burns, but there is no first-aid kit to be found anywhere in this factory, which employs roughly 200 workers.

Medical leave is a luxury he will likely never experience, and if he stays away from work – for whatever reason – he risks pay cuts, or even dismissal.

Arif is totally oblivious to his rights as a worker – in fact, he has no concept of labour laws at all, let alone that he is protected under them, even though Pakistan boasts over 70 pieces of legislation specifically relating to workers’ safety.

The sole breadwinner of a family of five, Arif assures IPS, “I am content. It’s better than being jobless – a state I have experienced for years.”

Arif’s plight is quite common in this South Asian country of 150 million people: experts tell IPS that trade union activity is discouraged at all levels and across industries, leading to a widespread denial of workers’ rights.

The problem is particularly severe in the industrial sector, which produces textiles and garments, leather goods, sports equipment and sportswear, surgical instruments and cutlery for export.

To meet a growing foreign demand, cities like Lahore, Karachi, Faisalabad and Sialkot have been transformed into industrial hubs, sprouting factories that have drawn a workforce that typically earns between four and six dollars a day.

But even while export earnings increase, the country’s administrative machinery has been apathetic about working conditions in these factories, says Khalid Mahmood, director of the Labour Education Foundation (LEF) of Pakistan. He says this lack of concern over workers’ safety has dire, sometimes fatal, consequences.

Having visited Ali Enterprises – the apparel factory in Pakistan’s capital, Karachi, that went up in flames last September, killing 300 workers – he says he cannot fathom how the plant was awarded the prestigious SA8000 certification by Social Accountability International, a New York-based monitoring body tasked with assessing safety standards, just weeks before one of the worst recorded industrial disasters.

Reportedly caused by short-circuiting, the fire tore quickly through the factory, trapping workers behind locked doors.

Though the factory owners blamed the heavy death toll on the chaos that followed the blaze, experts say a lack of basic safety standards – like an absence of exit passages or adequate in-house emergency firefighting capabilities – was the primary factor behind the tragedy.

A good five months down the road, families of several victims are waiting to gain custody of their deceased loved ones: burnt beyond recognition, the bodies have not yet been identified, despite repeated DNA tests.

The incident garnered considerable media attention but, as Khalid tells IPS, thousands of factories operating all over the country in similarly hazardous conditions represent equally devastating accidents waiting to happen.

“Local and imported raw material such as iron and steel scrap, synthetic fibre, silk yarn, chemicals and petroleum products are becoming expensive. The Pakistan rupee is (falling) against the dollar, loan markups are burdensome, energy costs are increasing and technological upgrades are too demanding,” Khalid says. “Labour rights are compromised to offset all these burgeoning costs.”

Over the last few months, local and international entities have called on the government to implement better, more effective laws to safeguard labour rights but Dr. Sultan Pasha, acting director at the Lahore-based Centre for Improvement of Working Conditions and Environment (CIWCE) does not believe that a lack of legislation is the problem.

He tells IPS that Pakistan has no less than 70 different laws regulating standards on cleanliness, disposal of wastes and effluents, ventilation and temperature, dust and fumes, artificial humidification, overcrowding, precautions in case of fires, work on or near machinery in motion and employment of young persons to work dangerous machines.

But the laws are splintered and divided into specific areas, from the Dock Labourers Act to the Factories Act, making their implementation and enforcement a challenge, especially for bodies like CIWCE, part of the labour and human resources department of Punjab’s provincial government.

According to Pasha, factory inspections were discontinued in 2003 on the pretext of protecting the industry from “harassment” by government officials. This left regulatory obligations in the hands of the factory owners themselves, most of whom will sacrifice rights and safe working conditions for profits.

Ghulam Fatima, secretary general of the Bonded Labour Liberation Front (BLLF) of Pakistan, tells IPS workers are seldom registered with the social security department, are underage and lack any access to first-aid, while working unusually long hours on outdated and dangerous machinery.

She claims “factory owners bribe labour department officers and do not bother to ensure safety standards”.

According to Pasha, the International Labour Organisation (ILO) recently began consultations with the government of the Sindh province to devise a comprehensive strategy for the future.

“Though there is lot more to be done, we are content that a draft law on workers’ health and safety is ready. We hope it will shortly be taken up by the parliament and passed through the required legislative process,” he adds.

Though many are skeptical about the possibility of change, others believe the answer lies in holding consumers of products manufactured here accountable.

Trade concessions announced in the aftermath of the floods that ravaged Pakistan in 2010 and 2011 offer even more opportunities for favourable trade relations and pass some of the burden for ensuring labour standards onto European consumers.

The work of the German Clean Clothes Campaign (CCC) in the aftermath of the Karachi fire is an example of successful consumer lobbying.

When news emerged that jeans carrying the label of the German company KIK had been found in the smouldering remnants of the Ali Enterprises factory, CCC exerted enourmous pressure on the corporation, eventually forcing it to cough up compensation worth a million dollars to families of the victims in Pakistan.

“It was the company’s fault not to ensure that the workers of the factory from which it imports (garments) work in safe and hygienic environments,” said Symantha Maher, head of the CCC delegation that visited Pakistan last month.

She charged that the Italian company that carried out an audit of KIK seemed “more interested” in collecting inspection fees than ensuring workers’ safety.

Maher also revealed that the CCC plans to coordinate regularly with trade unions in Pakistan and exert pressure on the Pakistani government by educating prospective importers on the working conditions in Pakistani factories.

“If the government wants to avail (itself) of preferential trade concessions and even retain its export markets, it will have to (comply) with international (and) national labour laws,” she says.