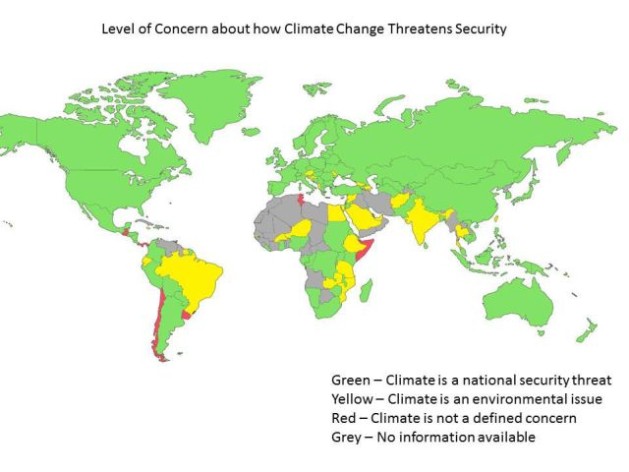 Courtesy of the American Security Project

WASHINGTON, Mar 22 2013 (IPS) - Defence establishments around the world increasingly see climate change as posing potentially serious threats to national and international security, according to a review of high-level statements by the world’s governments released here Thursday.

The review, “The Global Security Defense Index on Climate Change: Preliminary Results,” found that nearly three out of four governments for which relevant information is available view the possible effects of climate change as a serious national security issue.

In many nations, the armed forces are the most respected arm of government, and their action on climate change can raise awareness throughout the country.

It found that the wealthy developed countries of North America, Europe and East Asia, including China, have made the most progress in integrating climate change into their national security strategies.

With the notable exception of India, leaders of South Asian countries have also made strong statements about the security threats posed by climate change, while smaller countries in the Pacific, the Caribbean, and Central America have expressed alarm at the possible catastrophic impacts of climate change on them, according to the review.

It was officially released at the this week’s Climate Security Conference in the Asia-Pacific Region in Seoul, South Korea by the American Security Project (ASP), a non-partisan group headed by former senior U.S. government and military officials.

The Index, which will go online later this spring and be constantly updated, will catalogue official documents and statements by national governments – and particularly their military establishments — about the relationship between climate change and security issues.

“In many nations, the armed forces are the most respected arm of government, and their action on climate change can raise awareness throughout the country,” according to ASP’s Andrew Holland, who co-authored the report with Xander Vagg.

The review’s release comes amidst growing frustration among both climate scientists and activists over the slow pace and weakness of multilateral and unilateral efforts to curb the emission of greenhouse gases that contribute to global warming.

Governments’ failure to take stronger action has been attributed in part to the fact that climate change has been seen primarily as an environmental issue. As such, it has been accorded a lower priority than other challenges faced by countries, particularly economic growth.

In recent years, however, governments in a growing number of countries have recognised climate change as a national security issue – a recognition welcomed by activists who believe it should bolster their efforts to push the issue up the national and international agenda.

Here in the U.S., such an effort has been underway for some time. Just last month, a bipartisan group of 38 former senior and cabinet-level U.S. foreign policy officials, military officers, and lawmakers published an “open letter” to President Barack Obama and Congress calling for urgent action, especially in funding programmes designed to help poor countries both curb emissions and adapt to climate change.

Unless such action is forthcoming, “climate change impacts abroad could spur mass migrations, influence civil conflict and ultimately lead to a more unpredictable world,” the letter, sponsored by the Partnership for a Secure America, warned.

“…(P)rotecting U.S. interests under these conditions would progressively exhaust American military, diplomatic and development resources as we struggle to meet growing demands for emergency international engagement.”

A recent joint report by the Center for American Progress, the Stimson Center, and the Center for Climate and Security found that crop failures resulting from both severe droughts and flooding in various parts of the world contributed to food shortages that helped spark popular unrest in key Arab countries, paving the way for the upheavals known as the Arab Spring.

At the same time, head of the U.S. Pacific Command (PACOM), Adm. Samuel Locklear, warned that the impact of climate change on his region was “probably the most likely thing that is going to happen …that will cripple the security environment, probably more likely than the other scenarios we all often talk about.”

He told the Boston Globe that his command was already engaging the militaries of other regional countries, including China and India, about co-operation in addressing the challenge.

But the security implications of climate change are by no means confined to the U.S. and other wealthy countries with large military establishments, according to the ASP review.

It found that the governments and militaries of a least 110 of 155 countries for which relevant information was available have identified climate as a threat to their security. And many of those have integrated into their defence and national security planning documents.

“It was fascinating to learn how many different nations with such a variety of political systems, economic practices, and geographic locales share a common view on the dangers posed by climate change,” Vagg told IPS in an email.

“More to the point, these states all share the view that climate change — and its direct/indirect effects — should no longer be treated as a purely environmental threat, but rather a full-blown national security issue.”

Of the 32 countries identified by the study as resisting the view that climate change poses a security threat, India and Brazil were by far the most important.

Both countries opposed a move last month sponsored by Pakistan and Britain to put climate change on the U.N. Security Council’s agenda, according to Vagg.

Russia and China also opposed “securitising” the issue by placing it under the Security Council’s jurisdiction, although senior political and military leaders in both countries have defined climate change as a security threat, along with other non-traditional threats, such as global pandemics, terrorism, and transnational crime networks.

Climate change poses the greatest – even existential – threats to small island states of the Pacific and Indian Oceans, and the Caribbean. Surrounded by rising seas and highly vulnerable to storm surges, they have been ringing the alarm for some time, sometimes with the help of their larger continental neighbours, such as Australia. Sea-level rise in another low-lying coastal country, Bangladesh, could also displace tens of millions of people.

Of all the world’s regions, the report found that the Middle East and North Africa are most resistant to defining climate change as a security threat, although Turkey, Israel, Qatar, Jordan and Kuwait were notable exceptions.