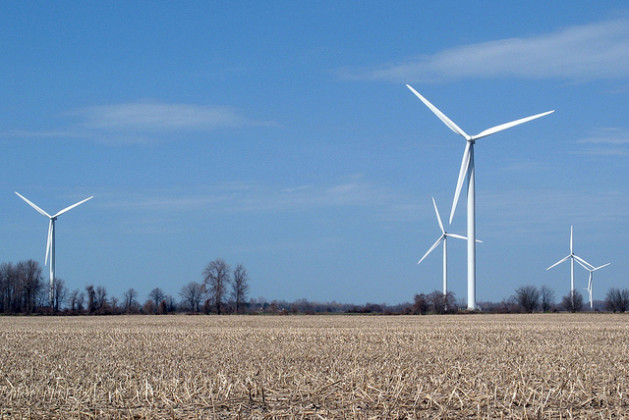 Obama's goals include a doubling of renewable electricity generation by 2020. Credit: Denise Morazé/IPS

WASHINGTON, Mar 15 2013 (IPS) - President Barack Obama on Friday unveiled a broad new proposal to step up U.S. research into renewable energy technologies, particularly in transportation, which is responsible for around 70 percent of the United States’ oil use.

The initiative, which the president is calling the Energy Security Trust, would receive around two billion dollars over the next decade, funded through proceeds from oil-and-gas drilling in U.S. coastal waters.

The United States is playing catch-up to countries like Japan, Germany and Korea on fuel cells, batteries and fuel economy more generally.

“The only way to really break this cycle of spiking gas prices for good is to shift our cars and trucks entirely off oil,” President Obama said Friday, speaking at a national laboratory.

He said the idea for the Energy Security Trust is based on a proposal put forward by “a non-partisan coalition that includes retired generals, admirals and leading CEOs … [to] take some of our oil and gas revenues from public lands and put it towards research that will benefit the public.”

The proposal also includes a series of new national goals, outlined in a White House brief released Friday. These include a doubling of renewable electricity generation by 2020, a halving of oil imports by the end of the decade, a halving of energy waste by 2030, and a series of new incentives aimed at ramping up energy efficiency.

It also includes focus on strengthened use of natural gas, additional oil-and-gas drilling on public lands, and increased support for U.S. nuclear exports.

Yet the proposal appears to be a significantly scaled-down version of President Obama’s earlier vision for renewables-related research and phase-in. When the president came into office in the immediate aftermath of the 2008 financial crisis, for instance, he was able to allot some 90 billion dollars to renewables research as part of a major stimulus bill.

That money is now largely gone, however, even as political rancour has increased on the issue. While some of the stimulus funding went into a few projects that resulted in high-profile failures – boondoggles that now constitute key talking points for conservative critics – Washington is currently enmeshed in a severe debate over austerity and government spending.

“It’s good to see the president focusing on the importance of developing advanced energy, but two billion dollars is chump change compared to the estimated 110 billion dollars in subsidies that will go to the fossil fuel industry over the next decade,” Jamie Henn, communications director with 350.org, an advocacy organisation, told IPS.

“The real way to accelerate our transition to renewable energy would be to put a price on carbon and direct funding into a new, advanced energy economy.”

Others are warning that, no matter the amount of money involved, linking funding for renewable energy with petroleum drilling is wrongheaded.

“This approach doesn’t create any additional cost for using fossil fuels, thus creating no incentive for firms to divert resources into safer, cleaner and more renewable sources of energy,” Tyson Slocum, director of the Energy Program at Public Citizen, a Washington watchdog group, said Friday in a statement.

“Additionally, linking modest investments in energy alternatives to oil and gas production creates a misguided incentive for more oil and gas drilling – a bad idea made worse without reform regulations and liability caps on offshore drilling.”

Indeed, one of the most significant flashpoints over the Energy Security Trust will be whether this money comes alongside the leasing of new offshore drilling opportunities, as is being pushed by many Republicans and some Democrats in the U.S. Congress.

In fact, an initiative very similar to the Energy Security Trust was included in a widely discussed national energy plan put together recently by Lisa Murkowski, a Senate Republican. Yet her plan specifically requires an increase in drilling to pay for new research, something the president has been ambivalent about.

However, the White House appears to be open to related negotiations. “This is something that we’ll have to talk about with Congress,” Josh Earnest, a deputy press secretary, told journalists Friday, “and if there are different ideas that people want to offer up, we’ll certainly have a conversation with them about that,”

That would strike many as a step backwards.

“What we need to be doing is investing in using less oil – getting more oil won’t solve the problem of high gas prices, pollution and other impacts from drilling,” David Friedman, deputy director of clean vehicles at the Union of Concerned Scientists, a watchdog group, told IPS.

“For us, more drilling would probably be a nonstarter. What we really should be doing is getting rid of subsidies to the oil and gas industry, and using those to help get consumers new options to save on fuel.”

Offering slightly more conservative figures than 350.org’s Henn, Friedman says the oil industry is currently getting anywhere from four to 10 billion dollars a year in subsidies. Yet even at the low end, that would add up to some 40 billion dollars over the course of a decade – massively larger than President Obama’s new research budget proposal.

He continues: “Instead, that money will just go to pad the profits of some of the most profitable corporations in the world.”

Yet Friedman cautions against writing off the Energy Security Trust proposal for its relatively small budget.

The current U.S. federal budget for research and development in transportation is only around eight billion dollars a year, he notes, so a boost of an additional quarter would be “not a game changer but a move in the right direction – but only if this is actually new money.” In today’s highly partisan atmosphere of austerity here in Washington, that last point is not yet clear.

The White House says the Energy Security Trust would “help solidify America’s position as a world leader in advanced transportation technology.” But Friedman says the country’s position on renewables research generally has been rapidly waning.

“Clean energy research and development has been underfunded in the U.S. for decades – currently, the United States is playing catch-up to countries like Japan, Germany and Korea on fuel cells, batteries and fuel economy more generally,” he says.

“But we’ve got amazing engineers in this country, and with the new standards in place, I think we’ll catch up and even move to the lead. Of course, that’s if the oil industry doesn’t try to block progress and undermine these policies.”