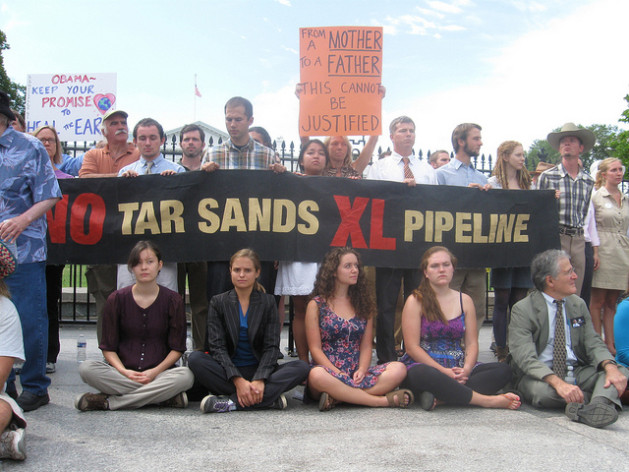 Since the project was first proposed in 2008, it has been beset by local and national opposition in both Canada and the U.S. Credit: Kanya D'Almeida/IPS

Scientists and advocates have reacted with significant alarm, warning that the new report, officially a Supplemental Environmental Impact Statement (SEIS), is merely recycling deeply flawed conclusions offered in previous such assessments. Since the project was first proposed by a Canadian company, TransCanada, in 2008, it has been beset by local and national opposition in both countries, including drawing some 40,000 protesters to Washington last month.

More people have gone to jail for [protesting] Keystone than for any issue in this country in the last 30 years.

“Here we are again, with the State Department producing basically the same report they produced before, saying there will be no big impact from this pipeline – a conclusion that is at odds with every scientist, diplomat and every other observer that has looked at this project,” Bill McKibben, the founder of 350.org, an environment advocacy group, told reporters immediately following the SEIS release.

“The 1.4 million public comments that poured into the State Department on this project seem not to have made much of an impact, nor has the testimony of leading scientists in this country and around the world.”

Known as the Keystone XL project, the pipeline would stretch from “tar sands” in south-central Canada to refineries in the southern United States, on the Gulf of Mexico. It would carry a noxiously dirty form of oil, known as bitumen, that releases around 17 percent more greenhouse gases than conventional oil.

Scientists say the tar sands would be able to be mined for around 50 years.

According to a 2012 report by the Congressional Research Service, the U.S. Congress’s research wing, bitumen from the tar sands would release the same amount of carbon dioxide as adding four million more cars to the roads. Others have put this figure even higher, the equivalent of six million additional cars.

Climate scientists, meanwhile, say that by itself the tar sands bitumen would release around half of the carbon dioxide left before the planet reaches a global temperature increase of two degrees Celsius, currently seen as a critical cut-off point by the United Nations, among others.

“This is the most important issue for the environmental movement here in a very long time,” McKibben said. “More people have gone to jail for [protesting] Keystone than for any issue in this country in the last 30 years. To have their concerns, and those of our leading scientists, blithely dismissed for a reiteration of the same tired boilerplate is very sad.”

He continued: “However, we’re hopeful that [Secretary of State John] Kerry and President Barack Obama will figure out that the bureaucrats have done a poor job here.”

While the southern section of the proposed Keystone XL pipeline is already under construction, the northern part – that covered by the new assessment – requires a far more extensive permitting process. That’s not only because it crosses several environmentally protected areas, including a massive aquifer critical for farming and drinking water, but also because it crosses an international border.

For this reason, the project will ultimately require President Obama to issue formal authorisation, a key bit of leverage that activists are now hoping to use in the weeks ahead. The president has yet to weigh in publicly on the issue, though he has made notable mention of the need for action on climate change in recent months.

The publication of the SEIS will now kick off a 45-day public comment period, following which the final environment report will be published. (Information on how to contact the State Department is available here.)

Particularly troubling in the new assessment is the State Department’s conclusion that the pipeline would be “unlikely to have a substantial impact on the rate of development” in the tar sands. This important contention appears to be undercut by widespread analysis, particularly from Canada’s oil and gas industry itself.

“That conclusion is not shared by any industry observers, economists or academics – those both pro- and anti-development of the tar sands,” Kenny Bruno, campaign director at Corporate Ethics International, a watchdog, told reporters Friday. “It’s perplexing that the State Department has come to that conclusion, given that it’s one that virtually no one in Canada shares.”

Others are reacting even more vehemently.

“Overall, the State Department says that the impact would be limited because oil will be mined, drilled and used no matter what happens – this is not only inaccurate but is devastatingly cynical,” Michael Brune, executive director of the Sierra Club, a conservation group, said Friday.

He notes that while the tar sands are currently producing around 1.8 million barrels of oil per day, new permits would allow for up to five million barrels per day. And yet, the industry is clear that, currently, all crude oil pipelines are operating near or at capacity.

“The tar sands are fundamental to the industry’s plan to triple development, and there is overwhelming evidence this pipeline is seen as the lynchpin,” Danielle Droitsch, Canada project director for the National Resources Defence Council, a watchdog, said Friday. “The entire industry is very open about this.”

The SEIS carries with it no formal recommendations. Even once the final assessment is finished, the State Department, in conjunction with more than a half-dozen other federal agencies, will still need to engage in a complicated process of establishing whether the Keystone XL pipeline is in the “national interest”.

Some are now suggesting that, regardless of how the State Department finally views the environmental impact, this National Interest Determination Report, potentially expected in August, could offer the clearest indication of how exactly President Obama sees the project.

For instance, while proponents of the Keystone XL discuss its impact in terms of job creation and U.S. energy security, critics say the reality is that the pipeline would create only a few thousand jobs and that the United States could well simply export the refined oil.

“For the National Interest Determination Report, we’ll be pushing to ensure that that there isn’t any more recycling of bad information,” Jane Kleeb, executive director of BOLD Nebraska, an advocacy group in one of the states through which the pipeline would pass, told IPS.

“There is very good evidence this is an export pipeline, not for American energy security. Likewise, jobs numbers continue to be overinflated. So, when it comes to the National Interest Determination Report, that might be where we finally see the writing on the wall.”