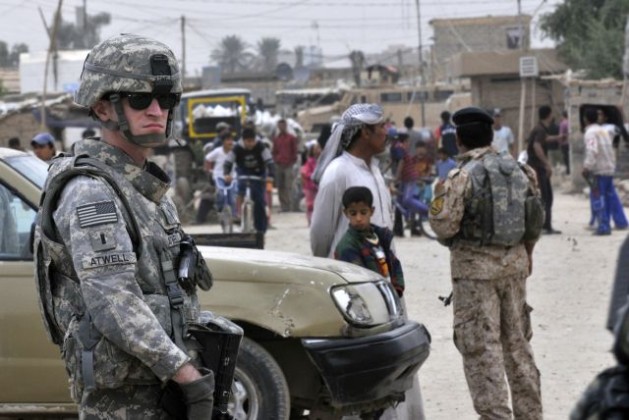 WASHINGTON, Mar 20 2013 (IPS) - Ten years after President George W. Bush launched his “shock and awe” campaign to overwhelm Iraq – and the rest of the world – with the futility of resisting Washington’s military might, the public and much of the foreign policy elite appear remarkably uninterested in marking the anniversary, let alone assessing the results.

The lack of interest may be explained by the fact that media attention to Iraq dwindled rapidly after 2008 as President Barack Obama instituted a rapid drawdown – ultimately withdrawing virtually all U.S. troops from Iraq by late 2011 – the same time that he more than doubled the U.S. military presence in Afghanistan.

“The only way Americans learn about the rest of the world is when we get involved in foreign wars,” noted one Washington veteran.

The lack of interest may also be explained by the fact that the war was an experience that many – even some of its defenders – would prefer to forget.

After all, the balance sheet doesn’t look very good: nearly 4,500 U.S. military personnel and another 3,400 U.S. private contractors killed and tens of thousands more badly wounded both physically and psychologically, while direct war-related costs to a cash-strapped Treasury exceeding two trillion dollars over the decade, according to the latest estimates of the Costs of War Project at Brown University released last week.

The Project also estimated the number of Iraqi civilians killed in the war at at least 134,000. It stressed, however, that that figure should be considered very conservative and, in any case, did not include deaths caused by war-related hardships which it said could total many hundreds of thousands more.

Also not included in the Project’s report were the more than 50 people killed in Baghdad Tuesday in a series of bombings – probably by Sunni insurgents – designed apparently to both mark the 10th anniversary of the U.S. invasion and remind the world that Washington’s goal of restoring stability to Iraq remains elusive at best.

The anniversary would seem to offer an important opportunity for reflection. This is particularly so given the growing domestic pressure here to intervene more forcefully in Syria – a “Free Syria Act of 2013” authorising the administration to spend 150 million dollars in lethal and non-lethal aid to the rebels was introduced by the Democratic chairman of the House Foreign Affairs Committee Monday — and the still-looming possibility of war with Iran.

Yet, with just a couple of exceptions, Washington’s most prominent foreign policy think tanks, as well as cable news and newspapers, focused their discussions and op-eds this week far more on Obama’s trip this week to Israel, the West Bank, and Jordan than on the Iraq War and the lessons learned from it.

One notable exception was the American Enterprise Institute (AEI), the neo-conservative stronghold whose pre-war “black coffee briefings” and close ties to Vice President Dick Cheney and Pentagon chief Donald Rumsfeld ensured its “scholars” a leading role in both promoting and actually planning the invasion and subsequent occupation – under the careful guidance of Ahmad Chalabi, the exiled Iraqi banker and confidence man who had hoped to be installed as the country’s new president.

In a one-hour briefing Tuesday afternoon that dwelled heavily on the supposed “success” of the 2007 so-called surge of 30,000 additional U.S. troops to prevent Iraq from falling into an all-out sectarian civil war, AEI associates, joined by Sen. John McCain, defended their advice throughout the war.

They have also run a flurry of op-eds published this past week, including one for FoxNews by former Deputy Defence Secretary Paul Wolfowitz, entitled “Iraq War taught us tough lessons, but world is better off without Saddam Hussein.”

Wolfowitz, a key architect of the war and major backer of Chalabi, argued that Washington should have adopted a Surge-like counter-insurgency (COIN) strategy much earlier in the war, a particularly ironic observation given his very public denunciation on the eve of the war of Gen. Eric Shinseki, then-Army chief of staff, who warned Congress of the need for several hundred thousand troops to keep the peace after the U.S. invasion.

Indeed, the war’s defenders – mostly neo-conservatives and aggressive nationalists, like Cheney and former U.N. Amb. John Bolton, another AEI “scholar” – spent most of the past week insisting that they had done nothing wrong.

“If I had to do it over again, I’d do it in a minute,” Cheney told an interviewer about invading Iraq in a television biography that aired last Friday.

Like his fellow hawks, the former vice president insisted that U.S. and other intelligence services were convinced that Hussein had weapons of mass destruction (WMD) that he was theoretically prepared to give to terrorists – and that, in the wake of 9/11 – justified the invasion.

Indeed, the notion that the only flaw in the decision to go to war was “bad intelligence” has become a mantra of the war’s defenders who, like Wolfowitz, appear to miss the irony of their complaints, given their own interference in the intelligence process in the run-up to the war.

“Intelligence did not drive or guide the decision to invade Iraq – not by a long shot, despite the aggressive use by the Bush administration of cherry-picked fragments of intelligence reporting in its public sales campaign for the war,” according to Paul Pillar, a veteran CIA analyst who served as the National Intelligence Officer for the Near East and South Asia at the time.

Indeed, the White House systematically ignored key reports by the intelligence community and the State Department that warned of the likely consequences of invading Iraq, even if it had WMD and was inclined to share them with terrorists, according to Pillar and a 2007 report by the staff of the Senate Intelligence Committee.

Among other things, these reports accurately predicted a breakdown in civil order – for which the Pentagon was completely unprepared — after the invasion.

It also predicted – accurately, it turns out — that a far-reaching de-Baathification programme of the kind promoted heavily by AEI and Chalabi would lead to violent sectarian conflict; that political Islam and anti-U.S. sentiment would surge across the region; and that any successor government would align itself more closely with Iran.

As for the general public, it, too doesn’t appear too inclined toward a major re-appraisal of the war. A spate of polls released this week suggests that opinions about the war have remained relatively stable over the past five years.

A majority (58 percent) told an ABC/Washington Post poll earlier this month they believed the war was “not worth fighting” – down from a high of 64 percent in late 2008), while 59 percent in a CNN survey released Tuesday characterised the decision to invade as a “dumb thing to do”.

A Pew Research Center poll released Monday found a virtually even split among respondents when asked whether using military force against Iraq was a “right” or “wrong” decision and whether the U.S. “mostly succeeded” or “mostly failed” in achieving its goal in Iraq.