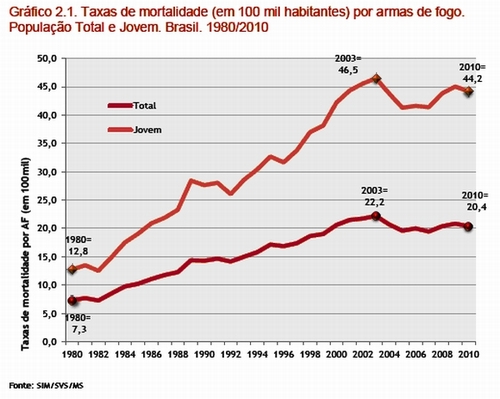 RIO DE JANEIRO, Mar 7 2013 (IPS) - The 1992 Carandirú massacre of 111 inmates shot down in what was Brazil’s largest prison was documented in thousands of print and televised news reports, as well as five books and a popular film.

But a similar number of people, mainly young men, are shot to death every day in Brazil, without any repercussions. “We have lost our sensitivity about this day-to-day massacre,” laments Julio Jacobo Waiselfisz, the author of the “Map of Violence 2013: Deaths by Firearm”.

The report, released late Wednesday Mar. 6 in Rio de Janeiro, was produced for the Brazilian Centre for Latin American Studies (CEBELA) and the Latin American Faculty of Social Sciences (FLACSO), based on official figures. It counts 799,226 deaths by firearm in Brazil from 1980 to 2010. Of that total, 450,255 were young people between the ages of 15 and 29.

This “invisible slaughter” is equivalent to the total official number of people killed in armed conflicts in 12 countries, including Afghanistan, Iraq, Sudan and Colombia, in the critical years of 2004 to 2007, the Map says.

The data include victims of accidents, suicides and “undetermined” causes of firearm deaths. But most were homicides: an average of 84 percent in the three decades covered, rising to 94.6 percent in 2010, partly due to improvements in the Health Ministry’s Mortality Information System.

Another important aspect is that 2.5 black people are shot for every white person killed by firearms in this country, where half the population of 196 million self-identifies in the census as “Afro-descendant”.

“We have been experiencing an unstable equilibrium” since 2005, with a decline in homicides in the most populous, richest states in the southeast, especially São Paulo, but with “drastic growth” in the more impoverished north and northeast, Waiselfisz told IPS.

Three main factors explain the shift of violent crime away from the southeast and into other parts of the country, according to Waiselfisz, an Argentine sociologist who lives in Recife, the capital of Pernambuco, one of the most violent cities in the northeast, Brazil’s poorest region.

Economic development, which was concentrated in the industrial cities of the southeast, began to be decentralised in the 1990s, with new poles of development in other states and in the hinterland drawing people and investment.

To that was added the National Public Security Plan, with a fund that helped improve the fight against crime in large cities like São Paulo and Rio de Janeiro.

In addition, improvements in record-keeping reduced the number of “clandestine cemeteries” and cut the under-reporting of deaths almost in half.

Despite the progress made, the number of firearm deaths is still too high, amounting to “one Carandirú per day,” said Waiselfisz.

He described the phenomenon as a Latin American “ulcer, a legacy of colonial, slave-owning times, of disdain for human life,” basically attributable to “a culture of violence, where conflicts are resolved by exterminating the other” instead of through negotiation or the administration of justice, and to “high levels of impunity.”

United Nations figures indicate that the average homicide rate in Latin America was 26 per 100,000 population in 2010, three times the European average. According to the World Health Organisation, any country with a murder rate above 10 per 100,000 people is suffering an epidemic of violence.

Studies in São Paulo estimate that only four percent of murderers go to prison, and say “losses” are suffered at every stage of the process – in the reporting of murders, police investigations, prosecution and sentencing. That stimulates crime, which in turn fuels impunity, in a “vicious circle,” Waiselfisz said.

He cited the sharp rise in murders in the state of Alagaos – 248 percent in the last decade – which he said was due to the arrival of another severe crime problem plaguing Latin America: the drug mafias, which were forced out of other areas. He also blamed the weakness of the local police, which held strikes that lasted more than seven months, he said.

Jorge Werthein, the president of CEBELA, told IPS there is a contradiction that merits greater reflection: the fact that the murder rate remained steady, and even rose slightly, in the last 10 years, while the economy and job creation showed strong growth, and poverty and inequality shrank.

Brazilian society must acknowledge the “unacceptable levels of violence” and seek answers “that do not only rely on repression,” he said.

The few years when the murder rate was in decline in Brazil were the result of a campaign against the possession of firearms, in the late 1990s and early 2000s, which was partly frustrated by a 2005 referendum, when voters failed to approve a ban on the sale of guns and ammunition in the country.

In Brazil, like in other Latin American countries, controlling arms sales is necessary to reduce the number of murders, and measures are also needed in other areas, targeting, for example, the culture of violence that persists in the region, Werthein said.

The Map of Violence, which tracks homicides in Brazil, is mainly aimed at “bringing to light” the day-to-day deaths that remain “invisible” to society and that require “national policies” and not just the habitual short-term measures taken to combat outbreaks of violent crime in specific areas, Waiselfisz said.