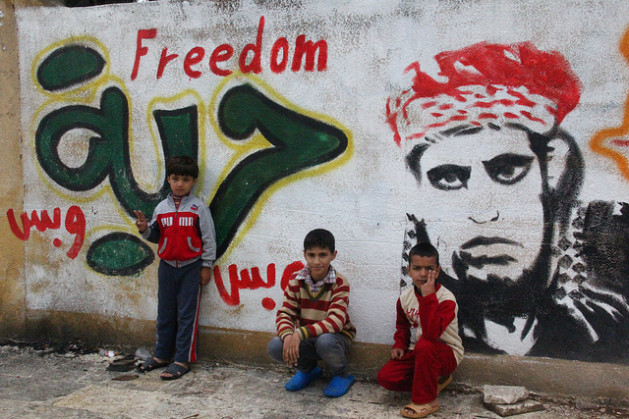 In Jarablus, Aleppo Governorate, on the border with Turkey, November 2012. Credit: Basma/cc by 2.0

UNITED NATIONS, Mar 20 2013 (IPS) - Amidst ongoing violence between the Syrian regime and opposition forces, and serious international discourse on arming the opposition, some Syrian civil society leaders are insisting upon a non-violent approach toward conflict resolution.

Dr. Haytham Manna and Dr. Rim Turkmani traveled to New York and Washington over the last week, speaking with members of the U.N. Security Council, Joint Special Representative for Syria Lakhdar Brahimi, the U.N. Human Rights Council and members of the U.S. Congress to garner support for an end to armed strategies in Syria and the coordination of inclusive negotiations toward a political solution.

We want the Syrian agenda to be first.

Whether or not the opposition’s militarisation was a realistic option or an inevitable reaction a year and a half ago, with an estimated 70,000 casualties, over one million refugees, and around three million internally displaced persons, Manna and Turkmani argue that it is time for a change of strategy.

On Monday, Secretary-General Ban Ki-moon also restated the urgent need for an end to violence and a peaceful political solution.

Manna is the spokesperson abroad for the National Coordination Committee for Democratic Change (NCC), an opposition coalition formed in September 2011 that has predominantly promoted non-violent political transition in Syria; he is also a career human rights activist and a practicing physician.

Turkmani is a member of the Syria-based political group called Building the Syrian State, also established in September 2011, which takes a similar non-violent stance as the NCC. She is an astrophysicist and also living abroad.

Both of these leaders and their groups have been criticised for not taking a hard enough stance against the dictatorship or calling for its immediate overthrow, and have been accused of allegiance to the regime.

However, the work of these groups and their prioritisation of the humanitarian situation throughout the evolution of the uprising contradicts such accusations, as evidenced by the rhetoric and diplomatic efforts of spokespersons, Manna and Turkmani.

In an interview, both articulated extreme dissatisfaction with the regime, which “oppressed our right to express our needs,” Turkmani told IPS. “It didn’t allow for civil society to be active and campaign for civil rights or to even exist.”

It should also be noted that many supporters of the armed opposition have jumped at the chance to criticise those who worked for change within the system without asking the Syrian people to pay for it with their lives.

Manna and Turkmani acknowledge that the opposition’s initial taking up of arms was a provoked reaction to a hostile regime. Today, however, the opposition has become the scene of a power struggle among global and regional powers pushing their own agendas.

“What we find after one year and a half of violence is more violence and less speaking about democracy, more economic problems and no one speaking about development and rebuilding the country,” Manna told IPS.

Since taking up arms, the opposition has gained many “friends” who will be less than enthusiastic about the development of a secular, pluralist democracy in Syria – i.e. the goal of the original movement that took to the streets in March 2011, they said.

Turkmani argues that the motives behind opposition support must be questioned when they come from authoritarian Gulf countries, for whom the rise of democracy is often perceived as a threat, or from Syria's long-term political enemies, who would like to see the country's military power weakened.

With the right amount of support for the opposition, these countries can keep Syria destabilized without paying the price in human lives.

Manna is particularly incensed by countries like Saudi Arabia.

"We have an Arabic proverb," Manna told IPS, "If you do not have something, you cannot give it. If you are not a democrat, you cannot build democracy anywhere."

“What we’re saying,” said Turkmani, “is that we want the Syrian agenda to be first.”

The task ahead of Turkmani, Manna and like-minded Syrians is not an easy one. Manna explains that not only must they win over the military opposition, they must also convince powerful countries with ties to Assad to pressure the regime into negotiations with the opposition.

Yet, what kind of negotiations can occur if one party has the goal of regime change and the other party is the regime – one that has unreservedly killed thousands of its own people in attempt to keep power?

“I don’t think at all that the regime wants negotiations,” Manna admits. “I think the only way to realise our project is to have real international pressure against the regime.”

Manna told IPS that in discussions with Russian Foreign Minister Sergei Lavrov, he stressed the need for Russia to apply real, material pressure on Assad and threaten his sources of power – otherwise, talking will be a waste of time.

“We are not a group of idealists. We are looking for practical solutions,” Manna said.

A great part of that solution involves working in Syria with communities that are ready to actively change the reality on the ground.

Local dialogue can “neutralise violence and give people the capacity to help one another,” says Manna, providing the example of Nawa, a city that has taken in displaced Syrians and nearly doubled its population in doing so.

Another important element of Manna and Turkmani’s proposed strategy is a U.N.-mandated monitoring mission which will allow peacekeepers to protect such local initiatives that maintain peace and rebuild communities.

Manna and Turkmani have found an ally in Joint Special Representative Brahimi, who agrees with the need for monitoring and the protection of a non-violent strategy. It is yet to be seen how their talks will play out in terms of U.N. decision making.

Contrary to the notion of a “Spring”, Manna stresses that Syria’s uprising is the product of a socio-political movement over 15 years in the making, which cultivated ideas of non-violent civil resistance to authoritarianism.

These ideas guided the opposition for the first several months of the uprising, but were met with brutal backlash from a hostile regime. The opposition was forced to either continue to risk their lives or to take up arms and defend themselves in the face of gross human rights violations.

The decision was not unanimous; however peaceful protesters soon found their tactics ineffective in an increasingly ruthless and complex battle zone.

Noted foreign policy analyst and professor of politics at of the University of San Francisco Dr. Stephen Zunes is an expert on Middle Eastern conflict and civil insurrection.

Non-violent opposition presented a real threat to the Syrian regime because it brought “an asymmetrical kind of warfare,” Zunes told IPS.

Instead of “facing the Assad regime at its strongest point, its military force,” he said, non-violent opposition could attack its weak point and “use the weight of the violence against him”.

Turkmani expressed hope for the eventual willingness of most of the opposition forces – Syrian soldiers who defected from the state army – to accept a negotiated political settlement.

To win their endorsement, however, and the endorsement of the entire opposition, it is crucial that all major Syrian opposition groups, armed and unarmed, be represented in negotiations, that divisive foreign interests be excluded, and that the regime concede its eventual removal.

That is a challenging list of demands, if not an unrealistic one; but Turkmani argues, “If we don’t risk talking right now, it’s going to be extremely difficult in the long run to do anything.”