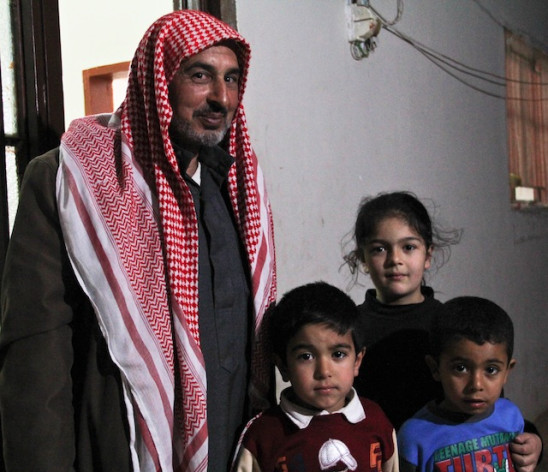 Muhammad Sleiman Ikhlif with two of his children and a child (on the right) from one of the families he is hosting. Credit: Zak Brophy/IPS.

WADI KHALED, Northern Lebanon , Mar 12 2013 (IPS) - The influx of hundreds of thousands of war-weary refugees from Syria to Lebanon is putting an almost unbearable strain on many of the communities that have taken them into their homes. A domestic economic crisis compounded by the arrival of such large numbers of refugees is weighing heavily on many impoverished areas.

The Lebanese government claims there are up to a million Syrians in the country (including migrant workers and their families), among a native population of around 4.5 million people. Unlike Turkey and Jordan, Lebanon has no formal camps. Lebanese families host around a third of the refugees.

“We opened our doors and invited them in thinking they would be here for one or two months and there would be a quick transition in Syria like in the other Arab revolts. Now it is two years later and we are really struggling to manage,” Muhammad Sleiman Ikhlif told IPS. He has built three makeshift rooms with breezeblock walls, where he houses five Syrian families.

The cramped dwelling is in the Wadi Khaled area on the northern border with Syria, which has one of the highest densities of refugees in all of Lebanon. Before the uprising against the government of Syrian President Bashar al-Assad took root, Wadi Khaled had been a relatively poor but self-sustaining region. Now, not only do the local communities have to host thousands of refugees, but the economy in the region has ground to a halt.

“Our communities used to survive off the trade across the border, and smuggling. All of this has stopped. The economy has completely retreated; there is no trade, no activity and no employment,” said Ali al-Beddawi, community leader in Rami, one of the Wadi Khaled villages just a couple of hundred metres from the Syrian border.

In addition to the burden of the refugee influx and the collapse in trade activity, the loss of Lebanese-owned businesses within Syria has also exacerbated the malaise in the region.

Al-Beddawi used to have a successful cosmetics factory in the Syrian city Homs, only 23 kilometres from Wadi Khaled, “but it has all been reduced to zero,” he said. He estimated there are at least 50 other businessmen from the region who have lost their enterprises and investments in Syria, cutting off an economic lifeline for much of the surrounding community.

The majority of the aid and assistance has, to date, been directed towards the refugees. This has created some resentment, as they have become integrated into Lebanese communities that are in many cases also suffering from poverty and instability.

“We can’t blame the Syrians for being here,” said a young man at the village store in Rami. “They are fleeing oppression, but life is unbearable for us Lebanese here and we get no support, while they have the UN and foreign agencies and everybody else supporting them.”

In recent months there have been some shifts towards supporting Lebanese host communities. For over a year Ikhlif received no assistance for, and accepted no rent from, the Syrian families he provided a home for in Wadi Khaled. However, over the past three months the Swiss Agency for Development and Cooperation (SDC) has been helping to cover the costs of housing the refugees. “This is a huge weight off my shoulders and makes it somehow bearable,” Ikhlif said.

“In terms of cost effectiveness, reducing further displacement and ensuring refugees have access to some kind of normalcy, being hosted in someone’s house seems to be the most valid option,” SDC director of cooperation Heba Hage-Felder told IPS. The SDC figure that their initiative has enabled 10,000 Syrian refugee families to stay in the homes of host families. They intend to extend the reach to 15,000 families in the April to September period.

The Unted Nations Refugee Agency (UNHCR), the United Nations Development Programme (UNDP) and some of the other major international aid organisations have similarly started to turn their efforts towards sustaining the homes and communities of those Lebanese who have opened their doors to fleeing Syrians.

“We all recognise the importance of building on this tradition of hospitality and making it sustainable,” said Hage-Felder.

The Syrian crisis is a highly divisive issue in Lebanon and the government has till recently come up with no strategies on issues such as the durability of host communities. “The Lebanese government hasn’t offered any support and has been completely absent from dealing with this huge crisis we are facing in the region,” said Al-Beddawi.

But with the economic and social strains reaching critical levels in some districts the government has launched the Lebanese Host Communities Support Programme in partnership with UNDP.

Robert Watkins, resident representative of the UNDP said, “More than anywhere else, the safety and livelihood security of refugees in Lebanon is inseparable from that of their hosts.”