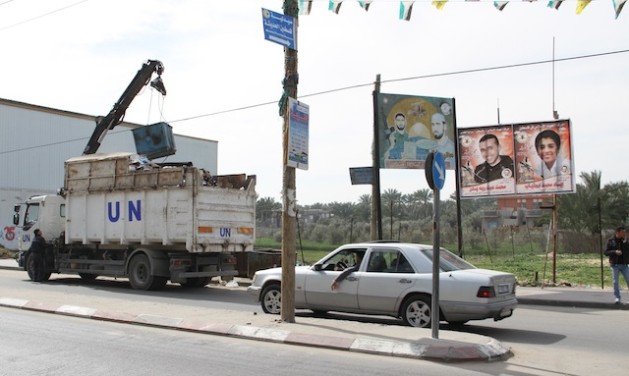 The United Nations steps in to save Gaza from collapsing under the weight of its rubbish. Credit: Emad Badwan/IPS.

GAZA CITY, Mar 31 2013 (IPS) - “For the past five years we’ve collected garbage by traditional means: donkey and cart,” says Abdel Rahem Abulkumboz, director of health and environment at the Municipality of Gaza. The municipality of Gaza alone produces 700 tons of waste daily, Kumboz says. More than half of this waste is collected daily by 250 donkey carts.

“It’s a means of doing the job, but not an optimal one,” says Kumboz.

Among the growing problems facing waste management throughout the Gaza Strip, even this simple solution nearly came to an end this month.

“The funding allotted to garbage collectors finished at the end of February,” says Kumboz, noting that it is not slated to resume until June at the earliest.

Hamada al-Bayari from the United Nations Office for Coordination of Humanitarian Affairs (OCHA) reports that the emergency response came recently after the intervention of Cooperazione Internazionale (COOPI), an Italian aid group. Bayari says that COOPI provided the funding for the waste collection to continue until the already-slated June funding begins.

The most critical issues include overflowing landfills, non-functioning collection vehicles, waste site toxins leaking into the groundwater, and no means of hazardous waste disposal.

“The severe siege over the past six years has affected all aspects of waste management,” says Kumboz, referring to the Israeli-led siege, which bans entry of construction materials into the Gaza Strip.

The municipality has 75 collection vehicles “over half of which are completely unusable,” he says. “The rest have been in use for more than 15 years and are in need of repair. Because of the Israeli import bans, we can’t get the parts we need for maintenance. We get some of them through the tunnels from Egypt, which is expensive and not guaranteed.”

The most urgent issue, Kumboz says, is the overflowing landfills. Expansion of Gaza’s landfills has thus far been impossible due to lack of construction materials and the routine Israeli army attacks in border regions where the three main dumps are located.

A February 2011 World Bank report had noted even back then that the Gaza Strip’s three main landfills are “reaching their maximum capacity.”

The report further noted that the landfill situation “has been further aggravated by the Israeli military actions” which resulted in “substantial amounts of demolition debris of damaged buildings, some of which is contaminated with hazardous substances.”

Other hazardous substances in Gaza’s waste sites include asbestos, used on many roofs in Gaza and found amidst bombing debris, chemicals and toxins from Israeli bombs, and hazardous healthcare waste from hospitals including infectious or pathogenic waste, blood and body fluids, and radioactive or chemical waste, according to a September 2009 United Nations Environmental Programme (UNEP) report.

During the winter 2008/2009 Israeli attacks on Gaza, “incinerators did not function due to electricity shortages. All landfills thus indiscriminately received hazardous materials such as healthcare waste,” the UNWP report notes.

Add to that more than 35,750 cattle, sheep and goats and more than a million birds and poultry killed in the attacks, which Gaza’s landfills did not have the means to dispose of hygienically.

All three landfills lie close to the Green Line border separating Gaza and Israel, and routine Israeli army incursions and attacks along the border limit regular access for landfill maintenance.

As the World Bank report notes, any future expansion of another of the three main landfills, Johr ad-Deek, “entails risks.”

On Jan. 5 this year, the Israeli army fired on a waste truck on the Beit Hanoun landfill. The Palestinian Centre for Human Rights (PCHR) reports that the truck was 150 metres from the border when fired upon. It reports that a worker, Awad al-Zaanin, was injured by bullet shrapnel to his head.

“Much of Beit Hanoun is a border area. There are many Israeli army invasions and bombings here. All of this causes problems for solid waste management,” says Sufyan Hamad, head of Gaza’s northern municipality.

On an aerial map of the northeast border, Hamad points out the dump’s location. “We were forbidden from reaching the dump, the Israelis banned us from going within 300 metres of the border.”

On Mar. 12 this year, Israeli rights group Gisha reported that the Israeli army spokesperson confirmed that the 300 metres along Gaza’s border remains off-limits to Palestinians. This is in spite of the Israeli army-Palestinian November 2012 ceasefire which stipulated that access be allowed up to 100 metres from the border.

Of the Strip’s three main landfills, the World Bank notes that only the Sofa site in south-eastern Gaza has the potential for expansion.

Yet, the report cites the need for “construction of two sanitary landfills” to serve the entire Strip, as well as the need to “close and rehabilitate all remaining dumpsites” and to “replace the old collection fleet with a new one.”

For Kumboz, who has been waiting for years for already purchased collection vehicles, getting enough vehicles just to replace Gaza Municipality’s broken vehicles scarcely seems possible.

“We have waited for five years for trucks already in Ramallah to be allowed to enter Gaza,” says Beit Hanoun’s Hamad. “The problem is with the Israelis, they say the trucks aren’t allowed to enter.”

The March 2012 World Bank report confirms the delay of 22 new trucks destined for Gaza which “have been waiting for the last three years in Ramallah for the necessary permits from the Israeli authorities in order to enter Gaza.”