In this column, Pascal Lamy, director-general of the World Trade Organisation (WTO), writes that for decades, commodity trade has been understood from the point of view of “commodity dependent” exporting countries, those whose revenues are largely generated by commodities exports. The trend of decreasing agricultural commodity prices was the focus of attention. However, from the beginning of the 2000s, there was an upward trend in agricultural commodity prices culminating in the price peak of 2007-08. 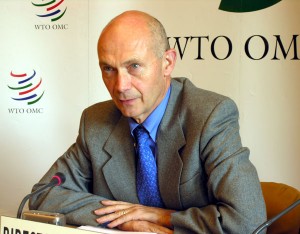 Following this period, food prices have started to ease but remain at relatively high levels underpinned by continuing strong demand resulting, among other factors, from the “nutritional transition” that goes hand in hand with poverty reduction, rising costs of inputs and often slow reaction of supply to price signals, stemming notably from partial “marketisation” of livelihood farming.

Nominal prices of agricultural commodities are expected to trend upwards over the next ten years, or even more, and are projected to average 10 to 30 percent above those of the previous decade.

Does looking at the two faces of the same “commodity coin” imply some contradiction as regards the role of the World Trade Organisation (WTO) in opening trade and the disciplines applicable to international commodity trade? On the contrary, the WTO can contribute to ensuring that commodity trade can address both import and export priorities.

Export subsidies are recognised as the most egregious form of trade distorting support. In the past, export subsidies contributed to decreases in already low world prices, with negative consequences for producers and exporters from developing countries. While agricultural commodity prices are generally higher now, it remains true that eliminating export subsidies and agreeing on further disciplines on export credits, exporting state trading enterprises and food aid modalities would contribute to a less distorted and more predictable international trading system.

Export restrictions can contribute to unpredictability and price volatility. By promoting consistent and predictable trade measures through binding and transparent rules, the WTO could bring a more positive contribution.

Policies that support domestic prices, or subsidise agricultural commodity production in some other way, artificially encourage production. These policies end up discouraging imports or leading to subsidised exports having a direct impact on more efficient producers in other countries. Reducing trade distorting domestic support would therefore increase global welfare by eliminating inefficiencies introduced by government intervention and offer producers a fairer price.

Regional and bilateral agreements tend to leave domestic support out of their scope. The multilateral negotiating table remains the sole forum for ensuring a fairer trade in agriculture products, one that allows countries to better capitalise on their comparative advantages.

Consider the case of cotton. A number of poor countries are dependent on cotton exports for their economic development. However, the cotton sector remains highly subsidised, especially in some developed countries as well as in some emerging ones. These subsidies depress prices and increase the difficulties faced by countries such as Benin, Burkina Faso, Mali and Chad. Progress has been made in this area, especially on strengthening the development support aspects, or on improving market access for cotton exporters but more remains to be done, in particular to address the trade distorting subsidies that remain.

Bound tariffs on agricultural goods remain substantially higher than those on manufactures almost everywhere around the world. Furthermore, tariff escalation where tariffs increase with value addition to commodities is frequent in agriculture. Reduction in peak agricultural tariffs increases market access opportunities for countries enjoying a comparative advantage, can lower the cost of food for consumers and also allows for the diversification of production, including value-added processing, and export markets.

Trade opening has created opportunities for agrifood firms to reorganise their production and distribution systems around value chains. A particular challenge is to ensure that smaller companies in poorer countries can join in value chains. Aid for Trade has an important role to play here. This is why the WTO’s Fourth Global Review of Aid for Trade, to be held next July, will focus on connecting to value chains including in the agrifood sector.

With the help of surveys by companies on the ground, we will examine the barriers which developing countries face in entering, establishing and moving up value chains, something that is of key importance for commodity exporters too.

Recommitting to commodity sector development in all its aspects is crucial to the objectives of promoting growth and eradicating poverty.