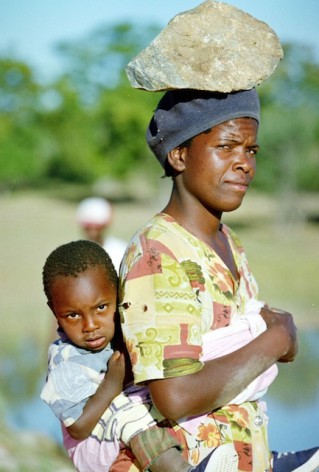 Five million registered voters in Zimbabawe have an opportunity to change the lives of this country’s women. Women represent the majority, some 53 percent of the Zimbabwe's 12.6 million people. Credit: Trevor Davies/IPS

Zimbabwe is holding a referendum on Mar. 16 to decide on whether to adopt the draft constitution that has taken almost four years to draft and gobbled 50 million dollars of donor funds from the impoverished country’s economy.

The Constitution Select Committee (Copac) is the constitutional parliamentary committee tasked with writing the draft constitution, and ahead of the referendum has been tasked with informing Zimbabweans about the draft and encouraging them to vote.

But the radio jingle is almost drowned by noise from a neighbouring beer hall’s jukebox.

Ironically the jingle’s message is seemingly aimed at women at the border post business centre, but they appear to be busy going about their daily chores – vending fruits and vegetables, almost indifferent to a process that local politicians have described as a game changer in this southern African nation’s political history.

A disinterested Maria Nyamasoka, 48, tells IPS that she does not care about the draft constitution.

“Nothing will change for me. Maybe for you people from Harare it will. Maybe that’s why you have travelled all this way to come down here to talk about this draft. In the last election my homestead was burnt and I narrowly missed rape from some party youths. I really do not want to talk about this…I don’t want to have anything to do with politics,” she says.

Despite attempts by Copac and political parties to push supporters for a “Yes” vote this weekend, some say they are unaware of the referendum or the draft constitution that they have been asked to vote on. Sithembile Mpofu, a Bulawayo housewife, is one of them.

“Maybe it is because I do not watch ZTV,” Mpofu tells IPS, referring to the national television station where programming has, in recent weeks, been dominated by campaigns asking registered voters to tick “Yes” on the referendum ballots.

“I cannot go and vote for something I do not know, even if I vote ‘No’ I will be dishonest,” she says.

But despite the lack of interest by some, five million registered voters here have an opportunity to change the lives of this country’s women. Women represent the majority, some 53 percent of the country’s 12.6 million people. The Women’s Coalition, a grouping of women’s rights NGO, has been campaigning for the acceptance of the draft constitution.

“Women have fought hard to get almost 75 percent of our demands adopted in the draft. Definitely life for women will never be the same again under this new constitution, if it’s adopted,” says Slyvia Chirawu, a national coordinator at the Women and Law in Southern Africa, and a member of the Women’s Coalition.

Chirawu says that women suffered particularly from Section 23 of the current constitution, which denies them equal rights as men with regards to custody and guardianship of their minor children.

“Under Section 23, a woman could not apply for a passport for her child without the consent of the father…(a woman) could not get her child’s birth certificate in the absence of the father of the child. But men could do all these things in the absence of the mother of the child,” says Chirawu. In the draft constitution women are now able to apply both for passports and birth certificates for their children without the consent of their child’s father.

Justice and Parliamentary Affairs Deputy Minister Jessie Majome, a member of Copac, tells IPS that according to the current constitution girls can marry at 16, while boys can legally do the same at 18.

“What this meant is girls had to drop out of school to be married off, while boys continued with their education. The boys had to wait to reach the legal age of majority, creating an unfair advantage against women. But according to this new draft, both boys and girls will be allowed to marry when they reach the legal age of majority,” says Majome.

The draft constitution will also ensure women relief from some harmful cultural practices that have been considered permissible.

Under-age girls have been married off to older men, while widows have been forced to become the “wives” of their late husbands’ male relatives.

“Although the (current) constitution had been amended recently to forbid some harmful cultural practices, this draft actually forbids and makes it unconstitutional for customary law to take precedence over common law. Women had been disadvantaged when it comes to inheritance, as they could not inherit family property. Widows also lost their property upon the deaths of their spouses,” says Majome.

Jane Chiriga, a gender researcher, says the draft is “a triumph for women.”

“There is a deliberate effort to address the flaws and gaps of the current constitution. What remains, I think, is to align this with the country’s laws,” Chiriga says.

In the past, the participation of women in politics has largely been left to the discretion of political parties to create quotas for women. But the draft constitution proposes to set aside 60 seats for women in the 210-seat parliament. In addition, women will constitute at least half the membership of all commissions and other elective and appointed governmental bodies.

“What takes the cake for me is the half membership for women in all commissions and other elective or appointed governmental bodies,” says Chirawu.

A legislator from the Movement for Democratic Change led by Prime Minister Morgan Tsvangirai (MDC-T), Tabitha Khumalo, says “it is a big step for women to be given prominence in the supreme law.”

“(In the past), women’s issues in this country have been addressed in token terms as if to appease us. But we have rights as equal citizens and this draft, if read with other laws, is something that will change both our public and private lives,” she tells IPS.

Constitutional law expert Alex Magaisa also believes that the draft could help stop the “politicisation of the security forces,” who have not hidden their support for President Robert Mugabe and in the process aimed their baton sticks at men and women alike.

The current constitution is silent about the key issue of political neutrality of institutions such as the army, police, and civil service.

“The draft has clear and extensive provisions that require these bodies (security forces) to be politically neutral and not to interfere with electoral processes,” he tells IPS.